1979’s 4-hour mini-series FREEDOM ROAD fits into the Important Historical Epics category like ROOTS or SHOGUN or I WILL FIGHT NO MORE FOREVER or some James A. Michener type shit. It’s about a man who goes from a slave to a soldier to a delegate to an educated black man to a senator and freedom fighter uniting former slaves with lower class whites to stand up against racist politicians and thugs and create a stable life for themselves. But the main reason to watch it is the star: Muhammad Ali. 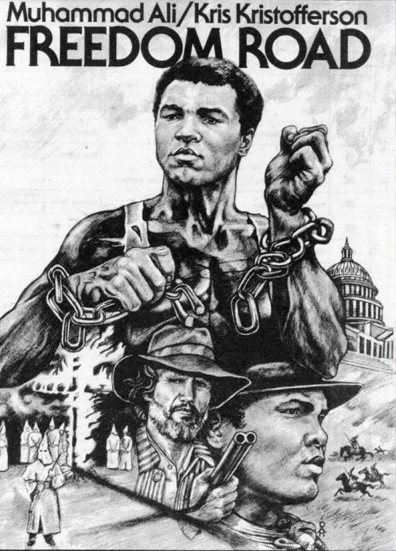 That’s right, the champ plays Gideon Jackson, a slave who escapes to fight with the Yankees. He doesn’t have a quarrel with no Viet Cong, but he does with the Confederates, who did call him the n-word. After the war he comes home and is appointed a delegate. He goes to the convention where he meets Ron SUPER FLY O’Neal playing an educated, wealthy black man of the North who helps Gideon learn how to read. He also meets a white man who invites him to dinner to meet other former slave owners and “help change their minds.” Really this asshole wants to show the racists what they’re up against. And right there they hatch a conspiracy to infiltrate the Democratic party and push for their racist ways. (Kind of funny to see all these references to the Democrats being the open racists and the Republicans being pro-black. When did they decide to switch, anyway?)

Gideon goes home and thinks up a more righteous plan. He knows to truly be free they have to own the land they live on. He convinces his friends and neighbors – including “white trash” sharecropper Kris Kristofferson – to work on the railroads, pool their money, team with a white investor who funded John Brown’s raid on Harper’s Ferry, and buy their land at auction. It’s a great idea – former slaves educating themselves and becoming the owners of the land where they were once forced to work.

But of course the racists aren’t gonna let this go without a fight, so there are various clashes with the Klan and it’s all leading up to a showdown when the sheriff tries to claim there was a mistake and they don’t own the land. Gideon knew they would try some bullshit like this and he convinces everybody to stay and fight.

When this aired in October of ’79 Ali had already retired as champion and had not yet had his sad 1980 return to the ring. It’s amazing to see him going around in a stove pipe hat and wearing a fake grey beard in the later scenes. To be honest Ali, in my opinion, is better at boxing than acting. I would not necessarily say that he is the Greatest of All Time on the stage and screen. He does not emote like a butterfly. But man, it’s fuckin cool to see him in this movie. There’s something perfect about the boxer who surprised everybody playing the slave who became a senator. Ironically, his poor reading and writing skills almost kept him out of the draft in real life. In the movie getting educated brought him places in life, in reality it was the lowering of the standards that got him drafted – at which point he refused to go, and his legend became bigger than ever. 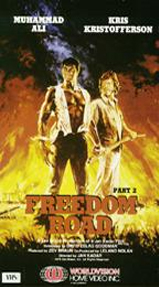 It’s also great to see him teamed with his real life friend Kris Kristofferson (who apparently coached his acting a little). Both of them are sort of unlikely counterculture icons – the boxer turned defiant activist, the West Point teacher turned drunken songwriter. Both of them poets, both of them somehow becoming movie stars along the way (well, mostly Kristofferson, but Ali starred in this one. That counts).

In the movie Kristofferson is reluctant to get involved, but he’s obviously very decent and honorable so he naturally becomes very loyal to Gideon. Having a black/white team this close to slavery might seem like wishful thinking, but man, it’s Kris Kristofferson. I buy it. These are the two guys I would choose to lead me down Freedom Road. And I definitely did follow them through this movie. Without them it might not hold up too well. Although some version apparently played theatrically in Europe it definitely feels made-for-TV. It’s epic but not exactly cinematic. But man, put Ali and Kristofferson in a movie, there’s no way it’s not watchable. I had no trouble getting through two tapes of this.

Here’s a vintage TV Guide article about the movie, which includes crazy anecdotes about Ali being friends with Elvis Presley and Christopher Lee.

And while we’re at it here’s the beginning of an outstanding Rolling Stone article about Kristofferson, written by Ethan Hawke of all people. You gotta get the magazine to find out about Kristofferson landing a helicopter in Johnny Cash’s yard to hand him a demo tape and other great tales, but here at least you get a knockout opening story where he disses Toby Keith in true Whistler fashion.

Alfre Woodard Civil War historical drama Kris Kristofferson Muhammad Ali Reconstruction slavery TV movies
This entry was posted on Thursday, January 7th, 2010 at 2:33 am and is filed under Drama, Reviews. You can follow any responses to this entry through the RSS 2.0 feed. You can skip to the end and leave a response. Pinging is currently not allowed.