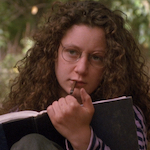 POISON IVY was a movie, then a franchise, and a genre, and an American institution. I don’t know if it was the first erotic thriller that could be described as “teenage FATAL ATTRACTION,” but I do think it kicked off many more of them, likely influencing movies like THE CRUSH, THE BABYSITTER, DEVIL IN THE FLESH and SWIMFAN, and evolving into WILD THINGS and CRUEL INTENTIONS and their DTV sequels. POISON IVY mostly spread its metaphorical itchy rash of underage femme fatalery by growing in clusters on late night cable and in the suspense/thriller section of video stores, but before that it had a very limited theatrical release on May 8, 1992.

Sara Gilbert (four seasons into Roseanne) made her movie debut starring as Sylvie “Coop” Cooper, protagonist and narrator-via-journal-entries. She’s a private school kid who sees herself as an outcast whose very rich parents don’t understand her. She wears Doc Martens, a tie-dyed yin yang shirt, and has an Egyptian eye design shaved discreetly under her hair. She smokes cigarillos, including in bed. She claims to have no friends*. She tells needless lies, like that she’s adopted, and that she’s half Black, and that she tried to commit suicide. Also she plays piano, loves her dog Fred (who she says doesn’t like any other humans), and teaches reading to inner city kids two days a week. A messed up kid but a good kid. END_OF_DOCUMENT_TOKEN_TO_BE_REPLACED 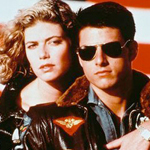 One difference: less spectacle. This is an impressively small story. For all its bluster this isn’t RED DAWN positing a communist invasion of America. This is about a guy involved in two small international incidents, basically just encounters between jets from opposing armies (nationality unspecified, but you fuckin know it’s Ivan Drago under that helmet). And though it has a reputation as a Navy recruiting film, since it famously worked as one, it’s not politically propagandistic. There’s nothing to make these “Bogies” evil. They’re just part of a system, people doing their job. They see American fighters where they’re not supposed to be, so they try to scare them off. The reverse of what happened in the opening. END_OF_DOCUMENT_TOKEN_TO_BE_REPLACED

The director is Gary Sherman (VICE SQUAD). He co-wrote it with Brian Taggert (VISITING HOURS). IMDb also says that Steve Feke (WHEN A STRANGER CALLS, MAC & ME) worked on it uncredited. In this installment Carol Anne has gone to live with her mom’s sister (Nancy Allen), who is newly married to Tom Skerritt, who also has a pouty teenage daughter (Lara Flynn Boyle). They all live in a fancy new skyscraper in Chicago, which Skerritt is the bigshot manager of.
END_OF_DOCUMENT_TOKEN_TO_BE_REPLACED

But you know what, it only adds to Clint’s mystique that he so humbly shares the movie with this rookie and even allows the spotlight to shift over to him for a while while the old man is tied up in a warehouse getting raped by Sonia Braga (SPOILER). This is also the most DIRTY HARRY of Clint’s non-DIRTY HARRY pictures. In fact, it probly feels a little more DIRTY HARRY than SUDDEN IMPACT, the one actual DIRTY HARRY that he directed. END_OF_DOCUMENT_TOKEN_TO_BE_REPLACED