Part 2 in the SNAKE EATER saga came a couple years later, in 1991, and has a definite early ’90s vibe. In part 1 the goofiest obviously-painted-by-Canadian-production-assistants graffiti I noticed was the one that said “SUPER RAD,” in this one it was “RAP HEADS.” So times are a changin’. It opens in a school gym full of African-American youths in Nike “Just Do It” t-shirts doing double dutch while others practice kung fu nearby. All the kids are being overseen by a paroled ex-troublemaker named Speedboat, played by Larry B. Scott (he played Lamar, the gay guy in REVENGE OF THE NERDS). Speedboat tells all the kids they gotta get ready for “the tournament,” and we never find out if it’s a fighting tournament, a jump-roping tournament, or some combination of the two. Two of them suddenly fall down and die from some bad coke, and the shit is on.

When Soldier Kelly comes to investigate he decides to do something he knows is unethical: go find the drug dealers responsible and execute them. When he’s blamed for the crime he is completely honest about it, but his sleazy lawyer puts in a not-guilty-by-reason-of-insanity plea and he’s put into a mental hospital for evaluation. 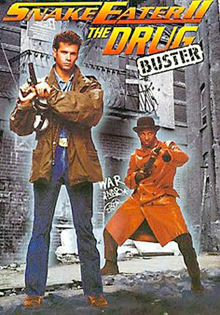 So basically this one is DEATH WISH meets THE DREAM TEAM. Horshack from Welcome Back Kotter returns as “Torchy,” the arsonist Soldier terrorized in the end of part 1, and there’s a sex-obsessed televangelist named Billy Ray (Jack Blum – Spaz from MEATBALLS) and a couple other characters that are obviously supposed to be funny that become Soldier’s friends and teach him about what goes on in the hospital.

The best part: rooftop gladiatorial wheelchair combat. Billy Ray does a benediction first, but gets sidetracked talking about tits and is almost struck down by lightning. Soldier has to fight some growling monstery guy called Goliath (stuntman Michael Scherer) to the death, but he spares his life and makes a friend (SPOILER). Goliath helps him to sneak out and then after that he can just do it whenever he wants.

He climbs out a vent to go on missions where he meets up with Speedboat and they murder criminals. The first one is some well-dressed druglord he finds in an alley and, using some random junk he quickly grabs out of a dumpster, sets up a booby trap that impales the guy when he gets into his car. Later he burns down a drug lab with workers inside who are tricked into spraying flammable liquid on the flames from rigged fire extinguishers. He puts laxatives in a mobster’s pasta, causing him to go sit on the shitter, which has a bomb in it. Seems like Paul Kersey’s poison cannoli in DEATH WISH V was a more direct approach. Maybe he should’ve looked into that.

The humor in the movie is broad and groan-worthy. When he’s climbing through the ventilation shaft the first time he passes a girl on her way in, and then a pizza delivery man. When he tells Speedboat he needs plumbing equipment and fire extinguishers for one of his operations, Speedboat brings him the van from a company called “Rosco’s Cut Rate Plumbin’ Fire Protection.” The movie ends with a pinhole in on the four wacky inmates doing funny dancing. So this is not raw or gritty action here. It’s just some fuckin around.

They disguise themselves as fire inspectors to burn down a drug factory (why didn’t he get Torchy in on this action?) and as health inspectors when they do the laxatives/exploding toilet deal. So I was thinking maybe it should be called THE DEATH INSPECTORS.

Soldier Kelly is a resilient guy, so in the climax he does a roundhouse kick and a makeshift aquarium electrocution shortly after receiving two bullet wounds. He can’t give up because he has a who’s who of crime lords all in one location. They basically have a panic room – they lock themselves in a vault – and Soldier’s way of getting to them is pretty SPOILER clever: he finds their drug lab and starts dumping bags of cut cocaine into the vent. Basically he cocaines them to death. He’s lucky Scarface wasn’t in there, I think he could’ve handled it.

Canadian Larry B. Scott Lorenzo Lamas vigilantes
This entry was posted on Friday, April 27th, 2012 at 11:52 am and is filed under Action, Reviews. You can follow any responses to this entry through the RSS 2.0 feed. You can skip to the end and leave a response. Pinging is currently not allowed.