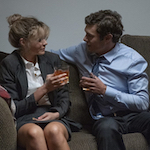 And actually she is fairly safe, because as she reveals when she sits up, she’s completely sober. She just has this hobby of faking drunk to see what assholes try to take advantage of her, and then shame them when they do. Try to scare them out of doing it again. Just a weird vigilante crusade of hers. END_OF_DOCUMENT_TOKEN_TO_BE_REPLACED 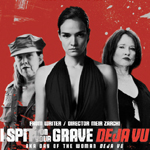 Things seem to have turned out all right for Jennifer. She’s an author and counselor for rape victims. She doesn’t treat her violent past as a dark secret – in fact, she wrote a new best selling book about it. As the original film’s famous tagline predicted, “No jury in America would convict her!” And she’s close with her daughter Christy (Jamie Bernadette, MORTDECAI), a world famous model who’s thinking of retiring. END_OF_DOCUMENT_TOKEN_TO_BE_REPLACED 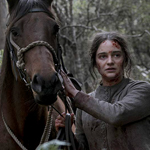 That made Kent one of those directors whose names get reported as being on the short list to direct every WONDER WOMAN or CAPTAIN MARVEL that comes along. She told Indiewire “I did entertain one blockbuster seriously and I thought, yeah, I could give this something really special. But then ultimately I heard about the way the films are made, and I thought it would kill me.” So five years later she still hasn’t been sucked into the ol’ i.p. game, unless you count developing an adaptation of the 19th century lesbian thriller book Alice + Freda Forever. Instead she made this. END_OF_DOCUMENT_TOKEN_TO_BE_REPLACED 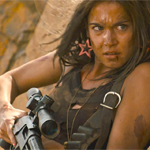 (NOTE: If this sounds like something you can dig, I suggest seeing it and not reading the rest of this review yet, because I will be using SPOILERS to discuss alot of what I find most interesting in it.) END_OF_DOCUMENT_TOKEN_TO_BE_REPLACED 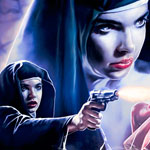 Yes, it’s a rape-revenge story like THRILLER: A CRUEL PICTURE, and also a vigilante movie like DEATH WISH. The rape scenes are as disturbing as any, but mercifully short compared to I SPIT ON YOUR GRAVE or something. The vast majority of the slim 80-minute running time is given over to our 17-year-old protagonist Thana (Zoë Tamerlis, later known as Zoë Lund)’s urban murder spree. When she beats a rapist to death with an iron she could report it as a legitimate case of self defense, but she makes the less orthodox choice of hiding the body and using his gun for the .45 caliber execution of adult men who make moves on her, attempted gang rapists, pimps she sees beating prostitutes, etc. A fun new hobby for a young woman living on her own in the city. END_OF_DOCUMENT_TOKEN_TO_BE_REPLACED 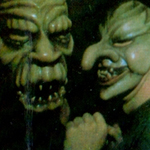 In the opening scene our heroine Linda Rodgers (Sallee Elyse, credited as Sallee Young) comes home and starts petting her horse before suddenly being jumped by a bunch of yahoos with pantyhose on their heads who drag her into the barn and gang rape her. The complete lack of buildup or establishing of characters or story makes it seem even cruder than I SPIT ON YOUR GRAVE, but at least the rape scene is much shorter and less graphic.
END_OF_DOCUMENT_TOKEN_TO_BE_REPLACED

But it turns out not to be what I thought it was. END_OF_DOCUMENT_TOKEN_TO_BE_REPLACED

“What do you get if you cross ‘Animal House’ with ‘Death Wish’? Young Warriors– a unique combination of fraternity hijinks, high-speed action, wildly imaginative animation, and hard-drivin’ rock!” END_OF_DOCUMENT_TOKEN_TO_BE_REPLACED

I SPIT ON YOUR GRAVE (2010) is an okay-but-could-be-much-better remake of the disreputable cult classic. In the rankings of 21st century remakes of notorious ’70s rape revenge movies I’d put it at #2, more watchable than CHAOS but not nearly as artful as LAST HOUSE ON THE LEFT. It has pretty effective pacing and a couple good ideas, but it’s not as smart or observant as I’d want for a really worthwhile remake.
END_OF_DOCUMENT_TOKEN_TO_BE_REPLACED

Okay, I already told you what kind of movie it is, but let me assure you, the rape part is not long and graphic like I SPIT ON YOUR GRAVE. The woman doesn’t get degraded too much, and neither do you, the viewer. It has a real good setup and a very capable heroine in a world where virtually all men are bastards or imbeciles. (Fair enough.) END_OF_DOCUMENT_TOKEN_TO_BE_REPLACED