SUPER is the landmark thirty-seventh movie about “what if somebody really tried to be a super hero?” But this one was made by James Gunn, the Troma guy turned SCOOBY DOO screenwriter who got some cred when he wrote the DAWN OF THE DEAD remake and then directed SLITHER. Looks like he’s had trouble getting anything off the ground since then (I guess the suits didn’t go for his take on Pepe Le Pew) so he made this one independently like he used to do, but maybe with some more skills and connections he’s made in the big leagues. For example the bit part of the lady at the pet store is played by Linda Cardellini from E.R., because she was Velma in SCOOBY DOO. (That was weird, I thought that character would come back or something, but no. She’s just a pet store lady.)

Rainn Wilson (HOUSE OF THE ONE THOUSAND CORPSES) plays Frank, a cook at a diner who somehow got married to Liv Tyler, but she got hooked on heroin and left him for a strip club owner/drug dealer named Jock (Kevin Bacon). Frank is kind of a nut and has visions inspired by a “Bibleman” type show on the Christian channel, so he decides to make a super hero costume and “fight crime.” His routine mostly involves sitting behind a dumpster for hours and eventually crushing somebody’s skull with a big wrench. 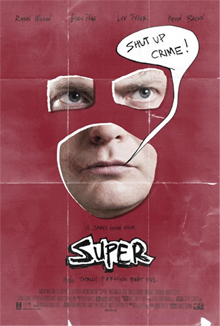 It’s more grounded than KICK ASS, there are no jetpacks or super villains. It’s also nice that they talk about actually existing comic books like Batman, instead of the usual routine of making up a fake comic book that the hero is obsessed with. And for most of the movie they do a good job of showing that although in his mind he’s a super hero in everybody else’s he’s a fuckin psycho who’s going around bashing people over the head. Then they kind of blow it later on when they do the same phony “I think he’s a hero!” / “Well I think he’s a menace!” man-on-the-street-interview montage that’s in 99% of all “real super hero” or DEATH WISH type movies. And by having him fight against actual bad guys who might deserve it.

He goes way overboard in the crime fighting, and the gore is pretty over the top. I think either we as a society or me as a dude are desensitized beyond the point of this “you think it’s gonna be fun, but then it’s so fucked up you feel bad that you wanted to enjoy it” type business being as effective as the filmatists always seem to think it’s gonna be. What are they supposed to be subverting here? Is there anything left in super heroes to subvert? Does it get reverted in between all the subverting in order for it to be resubverted each time?

Although they shoot it handheld on real locations and have very few CGI effects they don’t really give it a naturalistic enough feel to seem all that real. It might pass for a while but then there will be some Troma-esque reaction (a little girl enjoying a gorey attack) or completely forced behavior. I mean I like the idea of him overreacting to line-cutting at the movie theater and hospitalizing two people, but couldn’t they have made them cut the way people actually cut? Nobody just shoves their way into the middle of a neat single file line and tells everybody to fuck off. You’re taking me out of the movie. The little things are important.

And the costume he makes. It’s actually very functional with its hockey-style armor approach, and not too bulky. But then they gotta put a cartoonish wrong-colored patch on the side of his head so you know he did a bad job of sewing it. I feel like the excessiveness of his vigilante justice would be both funnier and more disturbing if there was more subtlety in the other areas.

Which brings me to my biggest problem with the movie. Most people probly wouldn’t agree with me on this, but I think Wilson was the wrong guy for this role. He’s funny as Dwight on The Office and everything, but that type of wild eyed, exaggerated character is not as funny or creepy in this role as it would’ve been if it was a guy who seems reasonable at first glance. From the beginning Wilson is making crazy faces and talking crazy. When he’s running around in the costume he has to do a “funny” run, instead of just doing it how somebody would really do it and letting the foolishness come out naturally. So it’s “look at this lunatic!” when it could’ve been “he seemed like a nice guy, why is he doing this?”

But he kinda looks like Frankenstein’s monster the way he frowns with that mask on. That’s kinda cool.

DEFENDOR is to me probly the most effective of this subgenre of movie, and that’s partly because it plays it straighter. It’s actually a less comedic take on the idea but alot of humor and discomfort comes out of Woody Harrelson seeming like a fairly normal guy doing something absurd. He doesn’t bug his eyes out and say corny things like a parody of a parody of Superman.

On the other hand my favorite part of SUPER is Ellen Page, and she’s not subtle at all. She plays a loopy acquaintance who finds out Frank’s secret and pushes her way into being his sidekick. Her fetish for costumes and her crazed giggling and cursing when she commits or sees violence is a weird combination of hilarious, adorable and unsettling.

Bacon is also good, as always, as the twitchy, sleazy villain. You don’t want to be in your kitchen making eggs and suddenly see that guy at the back door asking if your wife lives there, but that’s what happens. I like that he’s an evil asshole but seems to see Frank as more of an annoyance than a nemesis. Sometimes I get the feeling that he’d rather just convince Frank to leave than actually kill him. In fact, one of my favorite scenes is the first big showdown between Frank and Jock, when Jock threatens to kill Frank if he touches his car one more time. So Frank dramatically pokes the hood with his fingertip, but Jock says “That’s not the kind of touching I meant,” and tries to drive away.

Gregg Henry (of PAYBACK, many Brian De Palma movies, and SLITHER) is also in there, as a police detective who doesn’t want to investigate Frank’s wife’s alleged disappearance. And Michael Rooker as one of Jock’s henchmen. There’s a great moment where, after witnessing a dramatic confrontation between Frank and his boss, he stupidly offers Frank some of his Good ‘n Plenties. So it’s a really good cast, that definitely elevates the material.

And despite my misgivings I’d have to say this is one of the best of this type of movie. MIRAGEMAN has the best action and starts out the best, but gets goofy fast. KICK ASS had some good parts and the great performance by Nic Cage, but annoyed me with its less-real-than-the-serious-super-hero-movies approach to the what-would-really-happen-if-there-were-super-heroes concept. SUPER has plenty of weaknesses as well but keeps a fairly consistent tone and did make me laugh quite a few times. For the most part it doesn’t hammer on its jokes too hard, for example they never really nudge you in the ribs about how ridiculous it is that the masked hero’s symbol is a picture of a mask. Why would you wear that on your chest?

Most importantly, by the end it had me caring enough that it was upsetting to see bad shit happen. I guess that’s kind of an implied spoiler, but just let it hang over you like a dark cloud. This guy is not a charmer, it’s not gonna end with him admitting he’s Iron Man, most likely. Maybe it’s a subversion of the subversion of super heroes? I don’t know.

Ellen Page Gregg Henry James Gunn Kevin Bacon Liv Tyler Michael Rooker Rainn Wilson vigilantes
This entry was posted on Wednesday, August 10th, 2011 at 1:51 am and is filed under Comic strips/Super heroes, Reviews. You can follow any responses to this entry through the RSS 2.0 feed. You can skip to the end and leave a response. Pinging is currently not allowed.