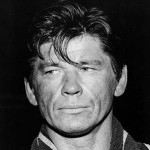 Well, L.A. didn’t work out too hot for Paul Kersey. Might as well head home. So Part 3’s opening credits show Kersey taking a bus back into New York City, looking out the window to the tune of the most in-your–face, half cheesy/half cool blast of white-man’s-keyboard-rock meets jazz-fusion-’80s-cop-movie-establishing-shot-of-the-city theme this side of HARD BOILED. Jimmy Page is back in the composer’s chair and comes up with a pretty weird and experimental sound more often than he comes up with the crappy guitar noodling you usually got after LETHAL WEAPON came out. He’s still no Herbie Hancock, but he’ll do.

Director Michael Winner returns for his last at-bat in the DEATH WISH series, but you immediately gotta wonder what the hell’s up because this feels nothing like his other DEATH WISHes. I’m honestly not sure if it’s a deliberate artistic choice or a sudden case of not giving a shit, but he has completely removed whatever traces there were of subtlety, thoughtfulness, ambiguity, class or elegance, not to mention realism. It looks cheaper, plays out more clunky and seems to have been made all in a week or so with no time to prepare or to stop to take a breath. And that’s exactly why it’s the most popular of the sequels. This movie is pretty fuckin nuts. 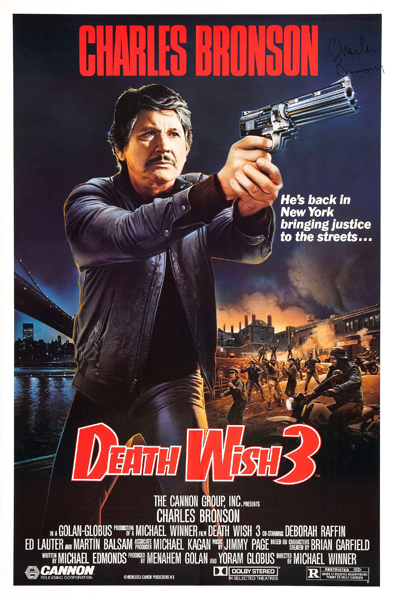 The first two took questionable morality and made it go down easier with execution that’s just a little smarter than the material. No time for that in III. The writing and editing both go for a sometimes hilarious bluntness and minimalism. No beating around the bush. No time to set up or explain things, no time to set a mood, to develop an idea, to linger on anything at all. For example a scene will start with some place already on fire – why bother to show how this starts? Let’s just skip to the burning. Maybe the funniest example is the lawyer who Kersey strikes up a relationship with during a few scenes. They start to see each other and before you have time to catch your breathe Kersey has left her in the car for a moment, the bad guys have punched her out, put the car in neutral and rolled it down the hill where it crashed and exploded. And Kersey is pissed but I don’t think he 0ever mentions her again. The movie’s saying, “yeah yeah yeah, revenge, etc. You get the idea, I’m not gonna blow a bunch of smoke up your ass about it.”

In the opening Paul comes to visit a Korean War buddy (who cares why?) moments after a bunch of punks have broken in and killed the poor guy. Then a whole bunch of cops show up and arrest Paul. One cop knows he was The Vigilante so he tells him he can go if he continues killing “creeps.” As a reader named Drew B. pointed out to me, “Eastwood shoots ‘Punks,’ and Bronson shoots ‘Creeps.'” Anyway now the story doesn’t have to deal with much secretiveness or cops trying to catch him. Just him shooting muggers.

The villains are your standard young white guys with chains and vests. Their leader Manny Fraker has a reverse mohawk and they all paint two lines on their foreheads in his honor. He’s a weird looking dude with a good lawyer who, after his first meeting with Kersey, offers to kill a little old lady in his honor. But you can tell underneath the bluster he’s a huge nerd. He sounds like such a weiner when he gets on the phone to call in some biker gang reinforcements. “Manny Fraker here…”

The Jeff Goldblum/Laurence Fishburne slot I guess this time would be filled by Alex Winter as “Hermosa.” I mean he’s mainly known as Bill or Ted (I never remember which one) but I still respect him for directing a movie nobody else knows about called FEVER.

The creeps seem to make up 99% of the neighborhood’s population. There are a handful of elderly people or women who live there but if they go outside they’re always surprised by a purse-snatching or a gang rape. If they stay inside the creeps climb in the window. So Kersey starts setting booby traps such as a bed of nails on the floor by his window or a plank that swings up and takes a guy’s front teeth out. Sadly these traps always go off off screen.

Alot of the movie is Kersey happening to walk around the corner as a crime occurs, then he chases them down and shoots them. He uses a gun designed for African big game hunting, and later a machine gun his late buddy Charlie saved after the war and a rocket launcher he uses to blow Manny Fraker through the side of his apartment. (He ain’t getting his deposit back.) The escalation is justified by the rioting creeps who just start blowing up cars, lighting people on fire and hiding on the roofs shooting at any citizen they spot. (More proof that Kersey’s vigilantism did not lower New York’s crime rate in the long run.)

The battle is painted broadly as a war between old people and young people. About the only time cops ever get involved is when they falsely arrest Kersey or when they come to take guns away from elderly people. (The right wing propaganda is at its all time clumsiest.) It seems like no cops give a shit about the crime at all except the one guy who gives so much of a shit that he secretely authorizes Kersey to execute all criminals on sight. I mean look, Kersey’s a good guy, I trust him. But this brings up some constitional issues, in my opinion. Some due process and what not. I’m not sure I’m comfortable with this.

But this is a hell of a movie. You can’t watch it and not get a little giddy. Whether its stripping down of the cliches DEATH WISH created was intentional or not is something that will require further study. Jim Blanton of Fantasmo Cult Cinema Explosion tipped me off to a book called Bronson’s Loose! The Making of the Death Wish Films by Paul Talbot. I couldn’t find it at the local book stores so I had to order it. As soon as I get it I’m gonna skip to the chapter on part 3 to find out what the hell was the thinking on this one. It seems like the movie that every violent parody of violent action movies in the ’80s was directly based on. By normal standards of filmatism it’s the worst of the series, but judged by raw force and entertainment value it’s the best after part 1.

If you like your action raw, ridiculous and completely ignorant, DEATH WISH 3 is a must-see.

Cannon Films Charles Bronson Michael Winner vigilantes
This entry was posted on Tuesday, March 4th, 2008 at 3:59 pm and is filed under Reviews, Thriller. You can follow any responses to this entry through the RSS 2.0 feed. You can skip to the end and leave a response. Pinging is currently not allowed.