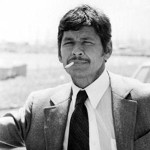 It’s 1982 now, 8 years later, but they say it’s 4 years later. (The magic of cinema.) Paul Kersey lives in L.A. now. His adventures in Chicago (portrayed in the book Death Sentence) are ignored. He’s still an architect, h has a new girlfriend (Jill Ireland) and he’s moved his daughter to a hospital in California. She’s still so traumatized she doesn’t speak. 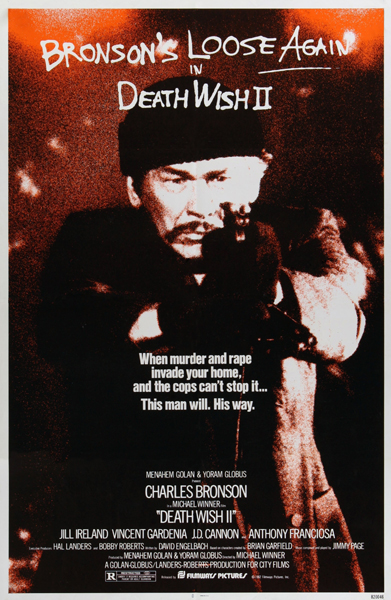 His life seems happy but then he has a run-in with some weirdos in the park. They steal his wallet so he chases one of them down and beats him up in an alley. Very satisfying, but too bad his driver’s license was up to date. They go to his house, rape his housekeeper, hit him over the head with a crowbar, kidnap his daughter, then rape his daughter until she kills herself.

One time a guy at the DMV scolded me for not updating my address after I moved, and he said if the police were looking for me they’d go to the old address. I said that was a pretty good case for not updating your address, and DEATH WISH II is another one. If Paul was still carrying around his Illinois driver’s license his daughter and maid would still be alive. And those thugs would be wandering around Chicago trying to find him.

This story raises a few questions. In DEATH WISH, Kersey’s vigilantism was said to lower the crime rate in New York City. And it inspired other people to stand up for themselves and fight off muggers. But did that last? And is he gonna hafta travel the world to lower crime rates everywhere else, because L.A. of 1982 seems way worse than New York of ’74. How’s he ever gonna keep up? He’s not Santa Claus. The hoodlums here are even less human and more violent than Jeff Goldblum’s crowd. They just run around grabbinb people. They giggle and stick their tongues out and swing around like monkeys. Then occasionally they just set up a boombox and dance badly to shitty guitar rock.

A word of warning: the rape scenes in this one are much longer and more graphic, almost headed toward I SPIT ON YOUR GRAVE territory. In the Jeff Goldblum future-respected-actor-playing-rapist slot we have Laurence Fishburne as “Cutter”, wearing sunglasses like Levar Burton on Star Trek. I read that the U.K. cut has some of that stuff censored but I wouldn’t mind. I get the idea.

I always wondered why in DEATH WISH all he needed was a gun. Wasn’t he ever gonna get mugged by somebody with more than a switchblade? In II that escalation has taken place, so he does get in shootouts. These guys are pretty pickpockets and crazy rapists, but they trade a bag of coke for machine guns from the mob. Shit is getting crazy out there.

The simplistic approach to issues continues. People Kersey hes call him a hero and refuse to give a description to angry cops who seems to care more about busting him than other criminals. Alot of sticking it to the man goes on in these movies. Jill Ireland’s character is very interested in criminal rehabilitation, Kersey kind of plays along and you’re probaly supposed to think “isn’t it cute, women don’t know what they’re talking about.” An anti-death penalty senator is made to look naive by only giving him one weak sentence to explain his stance.

But since Kersey’s tracking down the specific guys who did the crime this time it’s hard to get too mad at him. And his methods are extra badass – he calls himself Kimball, wears a knit cap and rents a rathole to use as his headquarters, his hall of urban justice. Meanwhile he’s trying to act normal whenever his lady shows up. He keeps having to hide guns or hope she doesn’t notice the blood pouring out of his sleeve. For his last kill he has to use her connections and a fake doctor ID to get into a mental hospital where the guy gets locked up for rehabilitation. The craziest part is Kersey proposes to her and plans it so that running off to Acapulco will also be his post-murder-spree getaway. Not too romantic. That’s kind of in the same category as Homer Simpson buying Marge a bowling ball with his name on it for her birthday.

There’s some pretty good violence. Laurence Fishburne has the best death – he tries to hold up his precious boombox to shield himself from bullets – it gets shot in half in time to see the bullet hit him in the face. But actually my favorite part of the movie is earlier, when Kersey is not yet on the warpath because he’s only had his wallet stolen. He doesn’t have a gun but he beats the guy up. The guy tries to stab him, he catches the blade in a cardboard box and disarms him. He gives him a few pounds but the guy turns out not to have his wallet, so he tosses his knife over a tall fence. Schmuck.

Then when he goes back to the ladies he doesn’t even tell them what happened. He just claims he can’t buy ice cream because he forgot his wallet. That’s Paul Kersey for you.

Cannon Films Charles Bronson Michael Winner vigilantes
This entry was posted on Sunday, February 24th, 2008 at 10:27 am and is filed under Reviews, Thriller. You can follow any responses to this entry through the RSS 2.0 feed. You can skip to the end and leave a response. Pinging is currently not allowed.