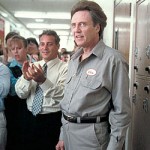 Walken of course is real good. He’s such a weirdo, but he gets to joke around, be kind of a charmer, and also be pissed off at this turn of events that people tell him is a “gift” even though it’s ruined his life. Cronenberg plays up the tragic love story. Walken and his old girlfriend still love each other, but while he was in the coma she got married and had a kid. So it’s tough. Not much you can do there that’s gonna make you happy in the long run. 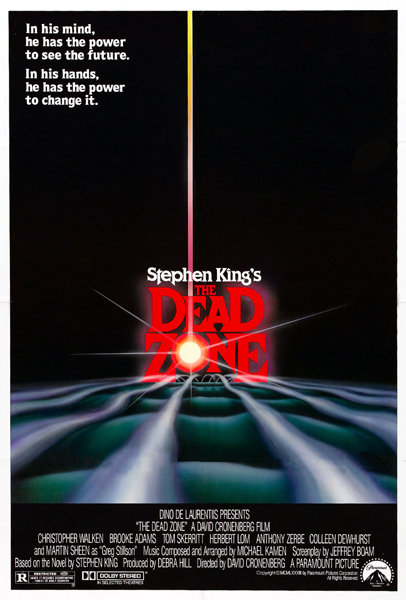 It’s definitely up there with the better Stephen King movies, but I gotta say it’s no CARRIE. Both have these events you never forget, but no matter how many times I watch CARRIE it still gets me in the gut because you know exactly the horrible thing that’s gonna happen and De Palma wrings every drop of tension he can from it, taking his sweet time, making you waaaaaaaaaaaaait for it. Very. Very. Slowly. As good as Cronenberg is he’s not that masterful with DEAD ZONE. It’s a cool idea – he sees a vision of a senatorial candidate starting WWIII and decides he has to assassinate him – but it happens pretty quick and then it’s over with. You kind of expect it to be drawn out more.

The weird thing about the movie that I didn’t remember is there are two crazy things that happen that I just can’t buy in this somewhat down-to-earth story. I’m not talking about the part where a guy commits suicide by propping up a pair of scissors and lowering his mouth onto it. That’s how you know it’s a Cronenberg movie, but it works perfectly well in context. There were a couple other things that were too much though.

In a “normal” Cronenberg movie people can do bizarre things (like fuck a leg wound) and it makes sense in his reality. But this one’s closer to the regular, non-wound-fucking world we live in every day so I gotta call bullshit on a couple of the characters’ actions. First of all, in the WWIII vision Martin Sheen (playing his same character from THE WEST WING and SPAWN) needs the vice president to put his palm on a scanner to launch the missiles. The VP refuses until Sheen says he’s gonna do it if it takes cutting off his hand. Now, obviously our real VP right now would not only put his palm down, he’d use the tip of his erect penis to enter the launch codes. But this isn’t Cheny, this is depicted as a normal human being who knows it is madness. And I can’t believe he would give in under any circumstances, and especially just from verbal threats. At least let them get the machete out and take a practice swing before you give in. Instead his attitude is like “Well, okay fellas, if YOU want to start a nuclear war then I’ll go along with it, but remember that I disagreed.”

The more laughable one is the climax, so obviously this is a BIG FUCKIN SPOILER. It happens when Walken tries to shoot Sheen at a campaign event. His ex sees him taking aim and calls his name, distracting him enough that he misses the first shot. Sheen’s reaction is to run over, grab the ex’s baby and hold him up like in THE LION KING or when Michael Jackson was out on that balcony. You know, the ol’ baby-shield trick. Sure, you’d shoot me. But would you shoot this adorable baby?

My friends, I do not have the power to convey how hilarious it is to see Martin Sheen frantically pick up a baby and hold it in front of his face as a bullet shield. It’s NICOLAS CAGE WICKER MAN crazy so it takes what has been a sophisticated thriller down a notch. But at the same time it’s something I haven’t seen before. So it’s the magic that movies are made of.

David Cronenberg Stephen King
This entry was posted on Monday, December 3rd, 2007 at 2:42 pm and is filed under Horror, Mystery, Reviews, Thriller. You can follow any responses to this entry through the RSS 2.0 feed. You can skip to the end and leave a response. Pinging is currently not allowed.

4 Responses to “The Dead Zone”