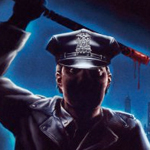 This has been in development for a while, to be produced by Nicolas Winding Refn and (last I heard) scripted by Ed Brubaker, writer of acclaimed crime comics (and Seattleite I believe). Sounds fantastic. But what takes this news to the next level is the director: John Hyams, the genius behind UNIVERSAL SOLDIER: REGENERATION, UNIVERSAL SOLDIER: DAY OF RECKONING, DRAGON EYES, THE SMASHING MACHINE and RANK. I have spent the last five years wondering why the hell some studio hasn’t given this guy a budget to deal with, since his straight-to-video works easily out-thrill, out-style and out-smart most big screen action movies, including $200 million dollar duds like, I’m sorry to say, the recent TERMINATOR picture. END_OF_DOCUMENT_TOKEN_TO_BE_REPLACED Maniac Kate responds to a pharmacy holdup by a crazed pill-feaster (Jackie Earle Haley in the movie that came before the one that earned him an Academy Award nomination for best supporting actor). Kate and the junkie end up in the hospital, the hostage dead, and a pair of sleazy tabloid video journalists film the whole thing and broadcast an edited version that makes her look like she was in the wrong. END_OF_DOCUMENT_TOKEN_TO_BE_REPLACED

This is maybe 2 weeks later, when Jack (Campbell) has been cleared of the murders but is trying to get back on the force. I’m a little confused because there’s a new captain and reference to the previous one being dead, but for some reason the commissioner, played by Michael Lerner (BARTON FINK) instead of Richard Roundtree, and given a different name, is treated as the guy who’s always been there. He sends Jack and Theresa (Landon) to police psychologist Susan Riley (Claudia Christian, HALF PAST DEAD), which is also where a new character, Detective Sean “Mac” McKinney, ends up after shooting a suspect. (He didn’t kill him, but only because he says it’s too much paperwork.)
END_OF_DOCUMENT_TOKEN_TO_BE_REPLACED

Jack gets involved because his wife (Victoria Catlin, GHOULIES, Twin Peaks) notices him sneaking around and suspects him of being the maniac cop. But of course he’s really going to see Theresa. Whoops. Since his wife gets killed by the maniac and left in his hotel room, now it looks like he’s the guy. END_OF_DOCUMENT_TOKEN_TO_BE_REPLACED

This was of course the same team that made MANIAC COP, and this is basically MANIAC SOLDIER. The maniac is Sam Harper (David ‘Shark’ Fralick), killed in a friendly fire incident during Desert Storm, not found until 3 years later. His burnt corpse is shipped back and sits in a flag-draped coffin at his widow’s house for the memorial service. But when his idolizing nephew Jody (Christopher Ogden) puts his box of medals inside the coffin for some reason that turns him into a vengeful zombie just in time for the town’s 4th of July celebration. (Also he pins the medals into his burnt flesh.) END_OF_DOCUMENT_TOKEN_TO_BE_REPLACED 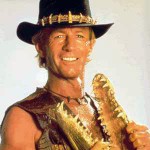 This one reminds me of RAZORBACK a little, because it reminds me of JAWS a little. The director, Arch Nicholson, was second unit director on RAZORBACK, but his movie is in a more realistic vein, less stylized and exaggerated. The crocodile never runs through the side of a house and steals a baby like the razorback did. The photography is pretty naturalistic, it’s by Andrew Lesnie whose name seems familiar because he did the LORD OF THE RINGS movies, the BABE movies, and I AM LEGEND. END_OF_DOCUMENT_TOKEN_TO_BE_REPLACED 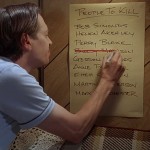 Basically this is the story of a regular guy whose kid is mistakenly kidnapped and he tries to get him back. I thought because of the title that he would have a list of people to get revenge on, but really he’s just going after this one guy who has his kid. END_OF_DOCUMENT_TOKEN_TO_BE_REPLACED 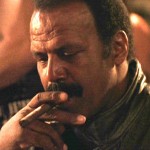 But there are some pretty good ones in his filmography, especially the first one, MANIAC. That was a sleazy, brutal horror picture about a sweaty New York pervert who kills women, staples their scalps to a mannequin, handcuffs himself to the mannequin and cries. Then during the daytime he puts on shades and tries to make it as a hip fashion photographer. It’s a real sick movie with ridiculous gore effects by Mr. Tom Savini. Not recommended for anybody unless they like that kind of crap, which in this case I do. END_OF_DOCUMENT_TOKEN_TO_BE_REPLACED 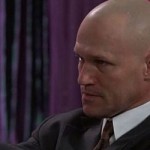 This week I decided to take the day off from my World Badass Studies to give a nod to my boys in the horror community. You see back when many of the movie type newsgroups rejected me on account of my harsh language and telling it like it is, etc. I posted a review of the “Sleepy Hollow” over there in the horror newsgroup and you know what happened? Those motherfuckers welcomed me with the openest arms you ever seen on the internet. Those were some of the nicest motherfuckers ever in my opinion. I don’t know what the deal is, they watch the gals getting their tongues ripped out and zombies eating a guy’s balls or whatever, then when they’re ready to call it a day they go online and there’s ol’ Vern and they treat him like just one of the boys. Bunch of sweethearts if you ask me. END_OF_DOCUMENT_TOKEN_TO_BE_REPLACED