This is his most straight-forward crime genre picture before SAVAGES so I figured it was a good one to check out. Based on the book Stray Dogs by John Ridley (RED TAILS, UNDERCOVER BROTHER), it’s about this dirtbag Bobby (Sean Penn), an ex-tennis player in debt whose fancy-ass car breaks down in the middle of Tiny Desert Town, Hell (actually Superior, Arizona) on his way to delivering a bunch of cash to the guy who cut off some of his fingers, and then things get way worse. But he fucks Jennifer Lopez at least.

The car, he proudly explains, is a 1964 1/2 Ford Mustang, and he has no choice but to leave it with weirdo mechanic Billy Bob Thornton, who is covered in dirt and wearing glasses worse than the ones he wore in A SIMPLE PLAN. This character makes me want to see Billy Bob play a Texas Chain Saw family member.

Lopez’s character is named Grace, but she doesn’t live up to the obvious symbolism the name implies. He sees her on the street and offers to help her with her new drapes. Both literally and… whatever. But after about 12 rounds of torturous teasing he’s finally moving in and a guy walks in. He’s her husband. Worse, he’s Nick Nolte. 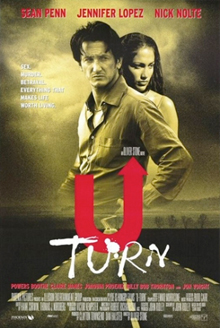 Now might be a good time to mention that there’s alot of people in this damn movie. Jon Voight plays a blind homeless Indian. Powers Boothe plays the sheriff. Claire Danes and Joaquin Phoenix play the silliest characters in the movie (he’s got a pompadour and calls himself “T.N.T.” Coincidentally Johnny Cash’s “Ring of Fire” is played in two of his scenes). Julie Hagerty from AIRPLANE plays a waitress.  Laurie Metcalf from Roseanne sells him a bus ticket. Liv Tyler is behind him in line when he gets the ticket (she doesn’t even have a line). Bo Hopkins is in there somewhere.

And Ennio Morricone did the damn music!

I know Lopez doesn’t exactly have an impeachable body of work. And I could hold it against her that she inadvertently started this whole “wouldn’t it be cute if we abbreviated all the celebrities’ names?” plague when she decided to have a rap name. But when people talk shit about her I always say, “Well, she’s great in OUT OF SIGHT.” Unfortunately, my defense of her doesn’t go much deeper than that. So I’m happy to say I think she’s a successful femme fatale in this one. She’s real good with the manipulation – crying about her mean husband, standing on a ladder and sticking her ass out – oh, I’m sorry, did I give the impression I was trying to seduce you? I’m sorry, it’s all a misunderstanding. Here, let me sit on the bed with my legs innocently spread and my face at your crotch level. She seems capable of WILD THINGS level backstabbing, but she’s already heard Bobby selling her out from the other room before she starts doing the same thing to him. She seems genuinely damaged and therefore a little bit sympathetic. Not bad.

As Jake McKenna Nolte, it should probly go without saying, is not playing a regular dude. He looks slimmer in his face than now (somebody pointed out to me that he looks like an old Ethan Hawke) but he’s HULK level growly and crazy, or kinda like Gary Busey’s little cameo in FEAR AND LOATHING IN LAS VEGAS. He first wants to kill Bobby, then wants to hire him to kill Grace – being “a man that has no scruples” he’s the man for the job.

I suspect that alot of Jake’s weirdest moments were Nolte specials. Like, was it in the script that he makes a determination about Bobby by wiping sweat off his face and tasting it? Or that he kisses him on the lips and announces “Now you’ve tasted both of us!” Or that he has an emotional breakdown scene where he cries “Forgive me!” into Jennifer Lopez’s crotch? I’m guessing no. But even if they were then they sure cast the right guy to do that stuff.

The worst luck Bobby has is when he happens to be in a little grocery mart as it’s being robbed, and they take his bag from him. Now, we’ve seen this before, this is a classic noir set up. The bag of loot gets stolen, he has to get it back, right? No, what happens is the shopkeeper nails one of the thieves with a shotgun, it blasts right through the bag of money, ripping the bills to pieces and covering them in gore. You always see people losing their money in movies, but how often do you see the money getting ruined?

This is a horrible little town, dusty and hot with nothing to do, and fuckin T.N.T. always thinks you’re hitting on his girl and tries to fight you. The sheriff picks you up and gives you a ride, pretending to be friendly but actually threatening you, FIRST BLOOD style. He casually drinks while he drives, doesn’t care if you see it. The residents know this place sucks – they dream of getting away. Claire Danes doesn’t even know Bobby but thinks she’s gonna run away with him. Grace has a fantasy of being a bird so she can fly away, be free, and go to Disney World. She tempts the sheriff with fantasies about starting a sporting goods store in Milwaukee. It makes Terence Howard in FIGHTING’s goal of starting an IHOP seem glamorous.

In the town’s defense I must point out that they have vending machines with Dr. Pepper in the glass bottle, and for only twenty-five cents. Also I noticed there’s a video store. So if you have air conditioning, a VCR and a roll of quarters you might be in business.

You know what’s weird, this almost plays like a parody of Sean Penn’s image to the people in the Fox News Belt. He’s an outspoken liberal so they hate him, and it doesn’t help that he often comes off kinda humorless about it. So he can and has been criticized even for something as non-partisan as taking a boat into a flood and rescuing people. Being one of his generation’s greatest actors just makes matters worse, because that’s kinda elitist. Besides, he threatens our way of life, making us have to try to describe why we hated TREE OF LIFE.

Bobby fits into that image because he’s this smug outsider who comes into their small town wearing a fancy suit, looks down on their simple way of life, calls a hard-working mechanic “an ignorant, inbred, tumbleweed hick!” He’s a criminal and, worse, a tennis player. The leisure sport of the super rich, the professional sport of lesbians. The people in the town are cartoons, buffoons, dirty monsters, daughter-rapists – they’re how Sean Penn’s critics think Sean Penn sees them.

This movie might even be the source of Penn’s reputation. They saw this on cable and they mixed it up with their memories of the real person. Sean Penn – isn’t he that guy who keeps rubbing our noses in his 1964 1/2 Mustang? Fuck that guy.

Whatever they shot it on has a real nice looking graininess on my HD tv, looks like my favorite blu-ray transfers of ’70s movies, even though it’s a ’90s movie on DVD. There’s definitely some NATURAL BORN KILLERS style in the filmatism, but toned down to more tolerable levels. It’s not so much the cuts and changes of format and random stock footage greenscreened and all that stupid CRANK shit, it’s the more Sam Raimi type of stuff: dramatic shot from inside the hood of the car with hose exploding in the foreground, extreme closeups of hood ornaments, key chains, signs. A couple times there’s corny shit like dogs barking over a fight scene and a horse sound as Billy Bob scrapes the hood of the car with a crowbar. And my favorite by far: for some reason there’s a crow in the room cawing as Jake doggystyles Grace.

But not too much of that. Lurid and heightened, but not spazzy.

The content itself does get more and more feverish as it goes along. I love that when Bobby and Grace finally get some cash they’ve been scheming to steal they spontaneously start fucking on top of it. This is with both the crow and a dead body still in the room. “Let him watch. I want him to know what he’s missing,” Bobby says. (Not referring to the crow, I don’t think.)

I like the tone. Sleazy noir, not real jokey but with a sense of humor, especially in the Billy Bob scenes. At one point we see him at home, he’s wearing short shorts and a parka playing Twister by himself. I like that every time we see him at work on the car it’s in different stages of being taken apart, always looking like some junker he’s salvaging and not the beautiful treasure it started as. My favorite part is when Bobby’s arguing with him over payment and in the background we see a cardboard sign that says “FOR SALE 1964 1/2 MUSTANG, $16,000.00 O.B.O.” The beautiful part is that Bobby was only supposed to get $13,000 for killing Grace.

In my opinion the one thing holding U TURN back is that Bobby is such a douchebag. I know that’s intentional but I think it might be a miscalculation. A story like this works better if you’re really rooting for the anti-hero. A lovable asshole is okay, maybe even preferable, but this is just a regular asshole. He’s not like a Bruce Willis character who you like even though he’s an asshole, he’s the guy you’d root for Bruce Willis to humiliate.

But it’s funny, the guy is so proud of himself with his old car and his pointy collar and everything, and what is it that makes him so awesome? He’s a tennis player. He could be a washed up jazz trumpeter or something, we could dig that, but tennis player? They even have a flashback where he’s wearing the white polo shirt and headband and everything. Then he’s strutting around like DON’T YOU KNOW WHO I AM? I WAS GOOD AT TENNIS BEFORE THEY CUT OFF MY FINGERS! Good stuff. I like this movie.

trivia: John Ridley was big on writing his characters as black but never directly stating anything about their race. Then they cast Sean Penn as the lead in this so he started just coming out and saying it.