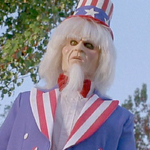 This was of course the same team that made MANIAC COP, and this is basically MANIAC SOLDIER. The maniac is Sam Harper (David ‘Shark’ Fralick), killed in a friendly fire incident during Desert Storm, not found until 3 years later. His burnt corpse is shipped back and sits in a flag-draped coffin at his widow’s house for the memorial service. But when his idolizing nephew Jody (Christopher Ogden) puts his box of medals inside the coffin for some reason that turns him into a vengeful zombie just in time for the town’s 4th of July celebration. (Also he pins the medals into his burnt flesh.)

Get it, the kid is his nephew, his name is Sam, he’s Uncle Sam. Also, he comes across a peeping tom wearing an Uncle Sam costume for the parade, he steals the costume and wears it for the rest of the movie.

A couple things about the costume: first of all, watching it for the second time I had the same feeling I did the first time I saw it years ago, that it’s a bummer he doesn’t keep the stilts. The peeping tom is on stilts but he just cuts the pants shorter. Can you imagine how enjoyable it would be if just one scene had him stalking somebody while wearing stilts? And he could attach knives to the end and step on people. It would be amazing.

Incidentally, somebody should use the clip of Uncle Sam spying on the naked lady for some kind of youtube video about NSA spying. A metaphor for our times.

Second, that mask kinda sucks. I don’t know why he has the expression he has. It doesn’t look like a real Uncle Sam mask or a scary one. The only time it really works is one shot where some guy says something ridiculous and then it cuts to Uncle Sam and the expression looks like “you gotta be fuckin kidding me.”

(The mouth hole might be cut that way just for the scene where he sticks his tongue through to lick the bloody cleaver.) 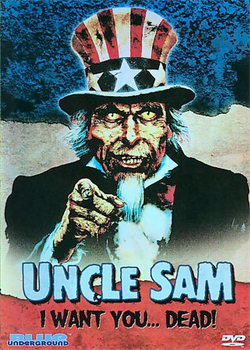 Most of Sam’s victims are total assholes that offend him for patriotic reasons. There’s the asshole lawyer who brags about defending tax shelters, and later claims that the Star Spangled Banner sucks. Classic Cohen line: “Francis Scott Key. What else did he write? Nothing. Not a single other hit.” Also there’s a sleazy, opportunistic congressman (Robert Forster), some drunk kids who for some reason burn a flag in the cemetery (and piss in his open grave), their surviving friend who butchers the National Anthem and pulls his pants down in front of everybody, etc. Not so much unpatriotic, but deserving, is the asshole who’s too aggressive during the potato sack race.

That’s what makes the movie worthwhile to me, as in all low-grade holiday horror, is the incorporation of various things related to traditional holiday celebrations. He hacks somebody up with a hatchet belonging to a kid enacting the George Washington cherry tree story. He beheads somebody with a cleaver from the barbecue area, and puts the head in the smoker. He impales a guy on a flag, obviously. He ties Forster to a fireworks display (the crowd doesn’t notice at first, so there are shots of them smiling as sparks spray out of his mouth). They kill him with the world’s most powerful and fiery mini-cannon. My favorite is when he literally runs a dude up a flagpole. Nope, nobody salutes.

The tone is serious, which I appreciate. It doesn’t seem comedic, per se, but has some obviously intentionally funny dialogue. I like when the mayor tells the crowd after a butchering, “Now, we’ve had a little tragedy here. It’s all being looked after.” And after a bunch of bullet hits don’t phase Uncle Sam when little Jody says, “I don’t think that’ll do.”

Unfortunately the overall feel is obviously not scary, but it’s also not really fun. It even has a weird ending where it zooms into the kid as he’s burning his GI Joes and his mother is watching proudly. It goes to slo-mo and the music turns scary… but nothing happens. Scariness is stylistically implied, but otherwise not present. Alot of the movie is puzzling like that. It’s kinda ugly and lacking in energy, partly because it takes a good 35-40 minutes to get going, without the skillful execution to pull that off. Maybe part of the problem is the weirdness of having a little boy as the hero in a movie for adults. I guess it worked for PHANTASM, but not as well here. The kid is pretty good, but kinda required to be a little shit by the plot, ’cause he doesn’t know his uncle molested his mom and beat his aunt. He just idolizes him because he plays with GI Joes and has military designs on his sheets and stuff. A little warmonger always talking up his dead uncle and bad mouthing people that just got murdered. Yeah, that guy was a tax cheat, but maybe “keep your opinions to yourself” on that, as mom says.

I’m not sure why Uncle Sam has a connection to the children. He tells Jody he came back because of him, he also approaches Jody’s blind, wheelchair-ridden, burnt friend (injured in a fireworks accident last year!) and promises to kill for him. It’s not until the end that the kids realize he’s an asshole and switch allegiances to Isaac Hayes, the one-legged Korean War vet who is still haunted by the war and by having filled young Sam Harper’s head with stories of combat glory.

There’s a lack of moral clarity here that maybe should be respected but I’m not sure it works. The victims are intentionally portrayed as assholes, but also the killer was a total bastard before he even went to war and died. There is a sense that yes, he was betrayed by being sent to this war by greedy assholes and left for dead, but maybe his revenge would have more meaning if he wasn’t also an evil psychopath beforehand. I’m not sure what that adds except a little bit of disrespect for the military.

But I do like that this is an anti-war movie from the era of Desert Storm. The voices against that war were barely heard or known to exist in the mainstream media, and I can’t off the top of my head think of another movie that criticized it. I wish they were more coherent in their message, but at least they tried. More effective (though overly serious for the movie) is an end credits war poem recital by the great b-movie actor William Smith (who also cameos in the opening scene). Other appearances by recognizable faces are Bo Hopkins, Timothy Bottoms and P.J. Soles. Also note that the editor is Bob Murawski, who went on to win an Oscar for the, uh, similarly themed HURT LOCKER.

Bo Hopkins Bob Murawski holiday horror Isaac Hayes Larry Cohen P.J. Soles Robert Forster Timothy Bottoms William Lustig William Smith
This entry was posted on Thursday, July 4th, 2013 at 1:40 pm and is filed under Horror, Reviews. You can follow any responses to this entry through the RSS 2.0 feed. You can skip to the end and leave a response. Pinging is currently not allowed.