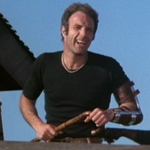 When they go to a safe house, Locken goes to take a shower and Hansen turns traitor, killing the defector they’re supposed to be protecting and then trying to cripple his partner. When he’s standing there naked with a gun pointed at him Locken doesn’t even get scared because he can only comprehend it as a joke. He really thought he knew that guy, now he’s shooting him in the shower? He never took him for a shower-shooter.
END_OF_DOCUMENT_TOKEN_TO_BE_REPLACED