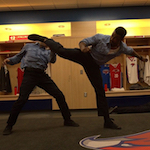 White plays Jesse Freeman, ex-special-ops guy who has a new job as a stadium security job after rehabilitating from some shrapnel he got after escaping torture and kung-fu-ing insurgents overseas. His wife (Sagine Sémajuste) thinks he’s away from the family too much, so he brings his worshipful daughter Mara (Nakai Takawira, Young Simone Biles, THE SIMONE BILES STORY: COURAGE TO SOAR) and unimpressed son Ryan (Lyric Justice) with him when he works the opening game for the Phoenix Falcons. You know, of the National Basketball League.

Also in attendance are the owner of the stadium (Sabryn Rock, The Girlfriend Experience), a billionaire philanthropist so famous that Jesse knows his daughter will be excited to hear she’s there; her boyfriend, a comedically phony rapper called Milli (Anthony Grant, POLAR); the mayor (Kristen Harris, WRONG TURN 4: BLOODY BEGINNINGS) and the governor (Paul Essiembre, voice of the Silver Surfer in the ‘90s cartoon series). Together, they’re ambushed in the owner’s suite by a guy calling himself Alpha (Michael Eklund, SMOKIN’ ACES 2: ASSASSIN’S BALL, HUNT TO KILL, TACTICAL FORCE, THE MARINE 3: HOMEFRONT, THE CALL, SEE NO EVIL 2, COLD PURSUIT), whose paramilitary team have infiltrated the stadium disguised as wi-fi technicians, then security guards, and planted bombs at all the exits. 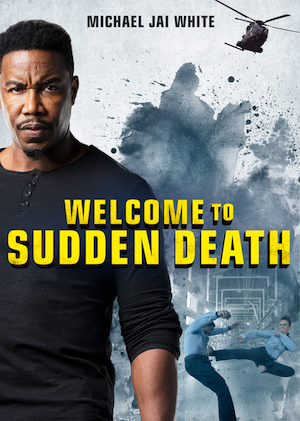 Jesse, of course, will have to use his skills to try to save everybody. When another character compares the situation to DIE HARD, Jesse squints like he has no idea what he’s talking about. (I don’t buy that.) He has an extensive Just How Badass Is He? background that we have seen ourselves in a prologue, and then hear the bad guys read from a computer file (“I told you he was a badass,” says Mara), and also just implied when he tells his boss, “You don’t know anything about me. If I submitted my real resume you would’ve been afraid to hire me.” Van Damme’s character was more of a regular guy, being a fire marshal and not soldier – I like that Jesse keeps a little bit of that underdog quality by being new at the job, a little bit nervous about it, and teased by co-workers for allegedly getting lost in the stadium. And his son calls him “lame” for not getting to carry a gun.

Jesse has help from a maintenance man named Gus, an affable white hayseed who calls him “Tight Shirt,” gets scared or boyishly excited alot and provides access to maps and golf carts. He’s played by Gary Owen, who I have now learned is a Navy veteran and former member of the Presidential Honor Guard who was named “Funniest Serviceman In America,” and became a comedian who was so popular on BET’s Comic View that they made him its only white host, and later gave him his own show. He was on Tyler Perry’s House of Payne, and Ebony called him “Black America’s Favorite White Comic.” Being unaware of any of this, I was absolutely convinced during his first scene that it was an awkward cameo by some athlete. His whole performance has the vibe of when baseball players or NASCAR drivers play a “funny” version of themselves in commercials. I don’t get it, but this is some sort of justice for a Black action hero to have a stereotyped white goofball sidekick. I support it.

Among Alpha’s team are two very good good henchpersons. Gamma is played by MJW’s wife Gillian White, who also acted with him in NEVER BACK DOWN: NO SURRENDER, but whose career goes back as far as LL Cool J’s “Hey Lover” video and the Chicks Who Love Guns video in JACKIE BROWN. She’s tough, has a cool look and plays a total psycho who has a good fight against Jesse. But the best villain is Omega, played by Marrese Crump, who I have followed since seeing him in David DeFalco’s WRONG SIDE OF TOWN, the same movie that introduced me to Dave Bautista. Crump is not in nearly enough movies, but he was the RZA’s main henchman in THE PROTECTOR 2 and his fight double in THE MAN WITH THE IRON FISTS 1 and 2. He also trained Chadwick Boseman for BLACK PANTHER.

In this one Crump’s movements are really impressive, and he has a good presence as a guy annoyed that he has to chase a little girl around. He takes Mara hostage after a funny scene where she uses her VIP badge to get into an employee bathroom and steps right into the middle of a kung fu battle. They do a good job of setting up his abilities so that you’ll anticipate his eventual encounter with Jesse, which (as a true martial artist) he clearly relishes.

I think 100% of all people who ever watch this movie will agree that that’s the best scene, an MJW duel against Crump and two others. Somehow you can sense it coming on as soon as Cypress Hill’s “How I Could Just Kill a Man” kicks in. I guess if they paid for a recognizable song in this over-lit Hallmark-movie-looking Winnipeg production you know this was the part they cared the most about. While I’m sure they didn’t get the amount of time they’d get on any production in an Asian country, this fight shows a level of thought and care that’s unusual in the U.S., especially at this budget.

The choreographer is the great Larnell Stovall (UNDISPUTED III, MORTAL KOMBAT: REBIRTH, BUNRAKU, NEVER BACK DOWN 2 and 3, UNIVERSAL SOLDIER: DAY OF RECKONING, FALCON RISING, KICKBOXER: VENGEANCE), who mixes in a variety of visually appealing fighting styles and gives the scenes a great rhythm and build, with little gags and character beats. Many of my favorite moments in the fights are White’s expressions between hits. In some fights he completely dominates, in one case feeling sorry enough to keep pausing to say things like “Brah” and “Come on, man,” before giving in and breaking the guy’s neck. I also liked the skirmish in a narrow hallway where he takes advantage of the closeness of walls and pipes to smash his opponent against them.

The fact that this goes down during a game is not taken advantage of as much as in the original. Though there’s a literal ticking clock with bombs set to go off at the buzzer, they don’t wring much tension out of it. And there’s nothing as good as when Van Damme fights someone in a mascot costume or gets on the ice dressed as the goalie. However, MJW does (SPOILER) shoot somebody with a t-shirt gun. Big points for that.

It’s absolutely a corny movie, with this wholesome family man, loving husband and father hero. I like that. I especially like that he doesn’t turn into a vengeful killing machine, as many action heroes do. At one point he offers to call a paramedic for someone he shot. Another time he beats some information out of a character and then thanks them for giving it to him. Not in a sarcastic way. Sincere.

I mentioned in the OLD GUARD review that I’m starting to think action movies using was-a-soldier-in-Afghanistan-or-similar-war-torn-Muslim-country as shorthand for badassness unintentionally indoctrinates us into accepting the status quo of an endless “War On Terror” that Bush and friends got us into and nobody has gotten us out of. So it’s only fair to mention that there’s a very cartoonish version of that here – way more kicking involved than those movies that are concerned with gritty realism. But to its credit it’s also balanced with a reveal that the villain was an “ex-CIA counterterrorism agent” who killed an American Muslim family when he raided them for incorrect suspicion of terrorism, and his motive is that he feels being held accountable for that ruined his life. He laughs at being called a terrorist, even though he’s planning to blow up a stadium full of people. Kind of aa Strannix type blowback villain.

Obviously I miss when movies like this could be theatrical releases, shot on film, with big production values. You know, like the original SUDDEN DEATH. Even in these modern circumstances it’s possible to make them with way more style and weight than this, as MJW has done both as an actor and a director. But the TV look and at times stiff dialogue doesn’t stop this from being an entertaining take on one of my favorite action formulas. White gets to be funny and cool, he and Crump show off their martial arts prowess, there’s good choreography and it’s shot cleanly. Now that I have been welcomed to sudden death I would be happy to return.

Written and directed by Dallas Jackson (THRILLER [2018], also writer of UNCLE P) with a co-writing credit to original SUDDEN DEATH writer Gene Quintano. Quintano also wrote COMIN’ AT YA! and POLICE ACADEMY 3 and 4, for the record. This is his first credit since 2004’s FUNKY MONKEY, so I’m guessing he didn’t get it on purpose.

Anthony Grant Dallas Jackson Die Hard on a ____ DTV sequels Gary Owen Gene Quintano Gillian White Kristen Harris Larnell Stovall Lyric Justice Marrese Crump Michael Eklund Michael Jai White Nakai Takawira Sabryn Rock Sagine Semajuste
This entry was posted on Monday, October 12th, 2020 at 10:28 am and is filed under Action, Reviews. You can follow any responses to this entry through the RSS 2.0 feed. You can skip to the end and leave a response. Pinging is currently not allowed.

22 Responses to “Welcome to Sudden Death”