This one is about Amy (Danielle Harris, MARKED FOR DEATH, THE LAST BOY SCOUT), a medical examiner working a long shift on her birthday. Geeky co-worker Seth (Kaj-Erik Eriksen) surprises her with a cake. I’m not sure about eating something that was put under a blanket on a slab in the morgue for a surprise, but I guess movie morticians are always eating big sloppy sandwiches while they work to show how over it they are. This is tame in comparison.

Amy is about to leave to celebrate her birthday when the corpses show up. She decides to stay and help the graveyard shift (keep in mind this is the morgue, not the graveyard, it is just a figure of speech), so her friends bring the party to her. 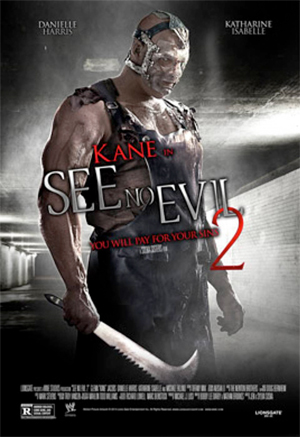 There are several subplots about relationships and what not. Seth harbors an obvious crush on Amy and is trying to get the balls up to tell her. Their wheelchair-bound boss Holden (Michael Eklund, True Justice, TACTICAL FORCE, THE CALL, THE MARINE 3) is giving him shit about it and trying to embarrass him. Her possessive, Hemsworthian brother Will (Greyston Holt, LOST BOYS: THE TRIBE) wants “a better life” for her than being a hard-working medical professional, therefore doesn’t want her dating her co-worker, and gets all in poor Seth’s business about it. And her friend Kayla (Chelan Simmons, TUCKER & DALE VS. EVIL) is trying to get with her brother.

The only people staying out of this love polygon are already a couple, Tamara (Katharine Isabelle, CARRIE tv version) and Carter (Lee Majdoub, BLACK OPS). There are certain actors who you see over and over again in horror movies, and it’s not their fault but it starts to seem like lazy casting. “I don’t know, get Lance Henriksen or somebody from DEVIL’S REJECTS.” But in the cases of Danielle Harris and Katharine Isabelle they’re reliable enough that I’m always happy to see them show up again. Here Harris does a less jaded and more vulnerable Final Girl hopeful than in HATCHET III, while Isabelle brings a similar energy to what she did in GINGER SNAPS and FREDDY VS. JASON, the best friend who is somehow likable even though she’s an idiot who keeps getting everybody in trouble because she gets a kick out of it.

SEE NO EVIL’s killer Jacob Goodnight takes the much-studied subtext of many slasher movies and makes it text: he is a messed up religious zealot who specifically kills people for what he perceives as sins, mostly sex. But he was killed in the first one, and a dog even peed in his eye socket. So his body is here and it’s revived the same way Jason’s was in JASON X: he just hears people having sex and comes back to life to kill them. (I wonder if any studies have been done on this?)

That’s the part that most reminds me of the dumb fun of the first one. Tipsy Tamara (Isabelle is good at playing drunk) is fascinated by serial killers and is so thrilled about the somehow-already-infamous-the-same-night-he-was-caught Jacob Goodnight’s corpse being in the building that she sneaks in, straddles it, talks to it, kisses it. 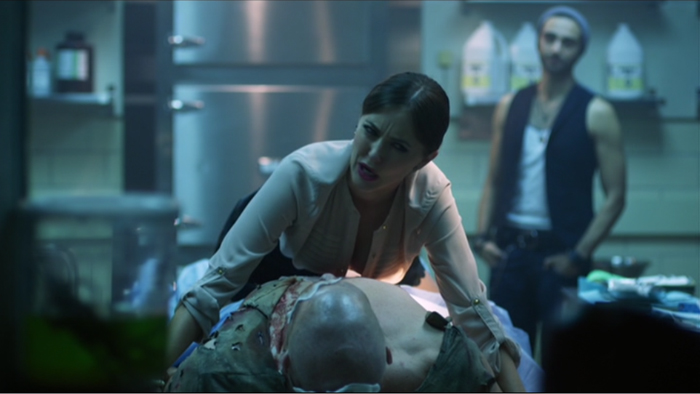 Uh… ma’am, I’m gonna need you to dismount from the dead psychopath. This scene is also made really funny by her helpless boyfriend being such a good specimen of the dude-trying-a-little-too-hard-to-dress-cool. How’s he gonna compete with the giant serial killer of her dreams?

But for the most part this is an entirely different approach from part 1. In that one all of the characters were shitbags who you just wanted to see get killed in different funny ways. Here they actually spend a bunch of time making the characters likable so that you’ll root against them getting killed. Like, I was a little nervous for Amy when she was taking the body up the elevator and it didn’t stop at the right floor and then she was trapped behind the big rolling bed. You never would’ve given a shit about anybody in trouble in the first one. I’d have to say part 2 is a better movie, but not as funny, so I didn’t enjoy it as much. Is that unethical?

But it definitely has some appeal. This is still the WWE version of a slasher, so he picks people up, throws them across rooms, slams them against walls and ceilings, etc. His trademark move is what I would call his wrestler entrance – he just barges right through locked doors like it’s nothing. Some people try to fist fight him, and it does not go well. When somebody swings a chair at him it just breaks on him like a bottle christening a ship.

The best kill is Holden. It’s obviously an unfair and dishonorable matchup, but at least Jacob challenges himself with it. Instead of just catching up with the wheelchair he throws a hook on a long chain down the hall and snags the back of it, dumping Holden onto the floor. Then he hooks onto his leg and reels him in like a fish. Holden can’t feel the hook in his leg and tries to use his arms to crawl, but come on, he’s not gonna get away. This is Jacob Goodnight. He wasn’t born and raised in a cage by an abusive fundamentalist mother yesterday.

Weirdly they don’t follow standard sequel practice of filling in more backstory. The mythology is kind of simplified instead of elaborated on. He’s away from home so we don’t get to enjoy those lifestyle choices like how he had a sophisticated network of pulleys and bells attached to the mattresses to notify him if any degenerates were having sexual relations anywhere in his hotel. The only thing they add to him here is a new look. He has the missing eye and also he straps on a transparent plastic mask meant for burn victims. So that’s his version of Jason wearing the bag over his head in part 2. The facilities also provide him with an apron and a number of exotic surgical tools to use as weapons.

The script is by Nathan Brookes and Bobby Lee Darby, who also wrote 12 ROUNDS 3 and the upcoming ELIMINATORS with Scott Adkins. The directors are Jen and Sylvia Soska, who also worked with Isabelle on AMERICAN MARY. Apparently they are huge wrestling fans and did this partly to meet The Undertaker, who was originally supposed to have a cameo at the end. This is my first time watching a movie by the Soska twins but I came in with some respect for them due to their version of an Alfred Hitchcock style cameo under their director credit: 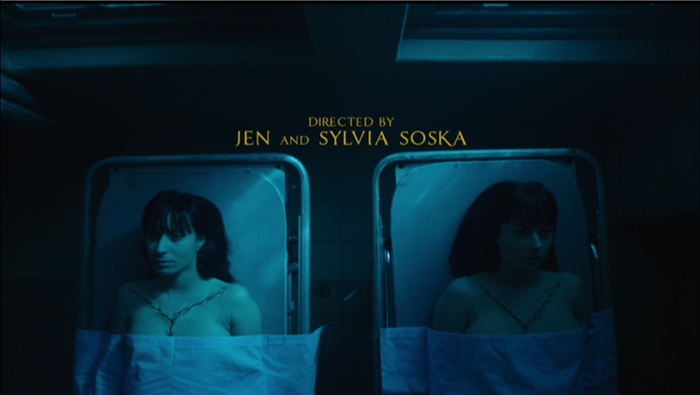 Although I was mildly disappointed that it wasn’t sillier, this is a pretty decent modern slasher movie. You could definitely do worse. For example I also tried to catch up with THE TOOLBOX MURDERS 2, but I turned it off when it seemed like it was just gonna be about the killer from the first one torturing somebody in a warehouse. On paper I love the abrupt opening of him scalping somebody on top of the Hollywood sign, but the 1980s video toaster style effects sort of ruin it. I cannot ethically review it but the beginning part anyway has none of the weird imagination of its predecessor by Tobe Hooper. I think Jacob Goodnight and I would be able to agree that we don’t need to see garbage like that.

Chelan Simmons Danielle Harris DTV DTV sequels Greyston Holt Kane Katharine Isabelle Michael Eklund slashers Soska Sisters WWE Films
This entry was posted on Monday, October 24th, 2016 at 11:41 am and is filed under Horror, Reviews. You can follow any responses to this entry through the RSS 2.0 feed. You can skip to the end and leave a response. Pinging is currently not allowed.