Unfortunately the bad guy is a serial killer – always a bummer. Terrorists and robbers and CIA agents are a good time a the movies, but some asshole that gets a boner tying up women? Not really as fun, in my opinion. Anyway they keep getting real close to catching the fucker, even chase him in a good over-the-top car chase at the beginning. I mean there’s a pretty serious maneuver the killer pulls when completely surrounded. Excellent use of the extreme Y-turn.(The new rule is, always put the best action scene at the very beginning.) 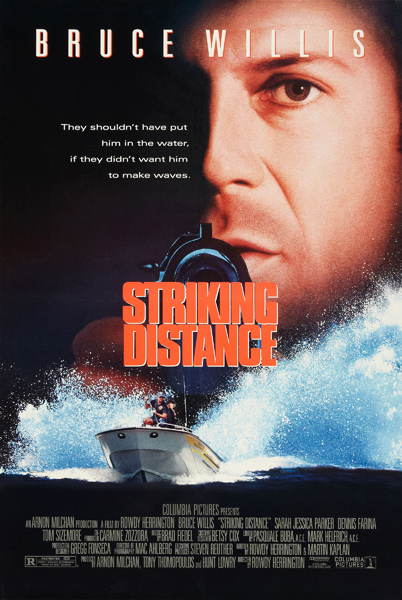 Bruce insists that the killer has to be a cop, but then they convict a guy who’s not a cop. Also his dad dies. Not to mention he recently testified against his partner/cousin Robert Pastorelli and sent him to the joint for police brutality. This of course has never once happened in the entire history of the universe and never ever will, but that only shows how fuckin cool Bruce is, he could pull something like getting a cop put in jail for police brutality. His cousin doesn’t want to go down though so instead he jumps off a bridge. Splash. No body shown. Who knows what this could possibly mean. Forget it, it’s probaly nothing.

Of course all the cops despise Bruce, he gets written off as a kook and 2 years later he’s an alcoholic and/or down-on-his-luck river patrol cop. And you would think at this point he would just go on with his life, ride around in some boats, screw Sarah Jessica Parker every now and then. Maybe start riding bikes or something, flying kites, fixing the porch. Whatever.

But no. Instead, to the surprise of the Amish but not anybody who’s ever seen a movie before, THE KILLER IS BACK. But wait, I thought they execu– what the– how could the killer be back? Apparently the Pittsburgh justice system doesn’t know that BRUCE IS ALWAYS RIGHT. They won’t admit it until the end of the movie but they roasted the wrong guy, and now the killer only goes after women that Bruce has dated before, and tries to get Bruce involved in the case, etc. It’s hard to imagine who could 1) be a cop 2) know who Bruce has dated 3) have it in for Bruce. Nobody really fits that profile. I mean except for Robert Pastorelli, but I mean, it couldn’t be him. He’s dead! I saw the splash!

Bruce is as convicted and charismatic as always, even though he’s not allowed to use much humor. And I always enjoy Mr. Farina. It’s also nice to see Brion James in there playing his usual bitter asshole, and Andre Braugher from Homicide doesn’t get anything to do, but at least they probaly paid him for the movie. That’s good. I swore Jake Busey was in one part too but I don’t see him in the credits.

It’s not all that stupid of a movie, but the problem is, it assumes that you are. It’s like they ain’t even trying to hide who the killer is. The answer is so obvious that I actually thought it was a trick. Because that would be such a huge insult to the intelligence of us, the average Bruce fans, to assume that we don’t see that coming. I mean, you could probaly guess who the killer is if you watched the first ten minutes with the sound off, standing on your head. The only red herring at all is Tom Sizemore, so the only question is whether he’s in on it or not.

Are you gonna let a movie talk to you like that?

A note about serial killers in movies. Why do they always have some song that they associate with their killings? In this case, the killer (Robert Pastorelli) calls up and plays some “Little Red Riding Hood” song over the phone before he kills a woman. And then every time you hear it you’re supposed to go OOOOHHH, SPOOOOOOKY. I hear this song in a whole different light now that a serial killer plays it. I’m sorry, Rowdy. It’s just corny.

Oh well, I’ve seen worse. But you can do better than this Rowdy. Let’s see some striving for excellence out there bud.

Bruce Bruce Willis Joe Pantoliano Rowdy Herrington Sarah Jessica Parker
This entry was posted on Wednesday, April 13th, 2005 at 7:38 am and is filed under Action, Bruce, Mystery, Reviews, Thriller. You can follow any responses to this entry through the RSS 2.0 feed. You can skip to the end and leave a response. Pinging is currently not allowed.