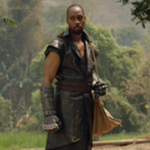 Filmed in Thailand with about a third of the first film’s budget, THE MAN WITH THE IRON FISTS 2 is much more normal and low key than the first one, I want to warn you of that up front. There are fewer colorful gimmicks, no crazy Russell Crowe performance, comparably grounded (both literally and figuratively) martial arts, and no mention of the cliffhanger from the director’s cut where I think he had to team up with the X-Blade to save his wife that got snatched by the Falcon Clan and put in a big nest on top of a mountain or something like that. But for me it’s still a very enjoyable sequel because it maintains the most important ingredient: the complete sincerity of the RZA. 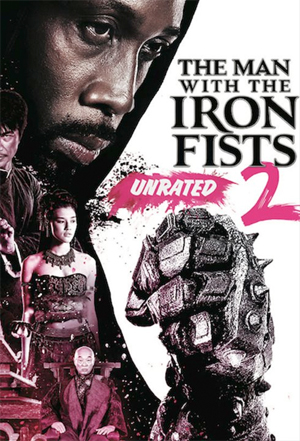 RZA provides the story and co-writes the screenplay with John Jarrell (ROMEO MUST DIE), and there’s nothing winky or phony about his use of traditional martial arts story elements, his themes of the underclass rising up against their oppressors, or his casual injection of hip hop into a period Asian setting. As always I love any part where he gets to narrate (see also G.I. JOE: RETALIATION), but I swear this time some of the little philosophical nuggets he drops are legitimately wise. He has a way of reciting these little koans or sayings that use an analogy to share insight on the story which we might in turn apply to our own modern non-kung-fu lives. Or if not at least it sounds cool.

As this tale begins, Thaddeus, a.k.a. the Blacksmith, a.k.a. The Man With the Iron Fists, has left Jungle Village “on a path to Buddha.” He wants to dedicate his life to peace, so he has covered his iron fists in bandages, but he gets jumped by Silver Lion’s brother Young Lion (Seigi Ozeki) and his men. Of course he wins the fight, but he falls unconscious into the river.

Now he’s out of the movie for about 15-20 minutes as we learn about this other village where young girls keep turning up dead, drained of their chi, possibly by the ghost of Lord Pi, who once tried to steal the Golden Nectar from the temple to achieve immortality. The fuckin prick. But also it could be the work of Master Ho (Carl Ng), brutal leader of the Beetle Clan who forces the men to work in his silver mines and stakes people who try to leave town. When Thaddeus floats in and is nursed back to health by a girl named Innocence (Pim Bubear) and learns about the village from her father Li Kung (Dustin Nguyen, RAPID FIRE) he can’t help but notice the parallels to his old neck of the woods (the American south).

On the commentary track RZA says he originally meant to call her the Chinese word for innocence, but then decided to just leave it as Innocence. But he has created a world here where that sort of thing is allowed.

The Man With the Iron Fists’ legend precedes him, so they ask him for help, as you do when a badass drifter comes through your troubled town in a western, samurai or kung fu film. But he’s one of those seeking-redemption badass drifters so he doesn’t want to punch anybody or forge any more weapons of death. He just makes them new tools for mining. That can also be used as weapons of death.

I think there’s one notable improvement in the sequel: RZA – who seemed uncharacteristically tired in the first one – is much more present here, and this time is the coolest character in the movie. When he decides he has to fight and the bandages are torn off his fists it’s a thrilling moment, and though I’m guessing he’s a less experienced martial artist than some of the other actors he has a really appealing style, a distinct way of moving his lanky limbs, and of course an emphasis on super-powered punches. He’s once again doubled by Marrese Crump, who played his henchman in THE PROTECTOR 2 and got his start in Demon Dave’s WRONG SIDE OF TOWN, but it looks like he’s doing alot of his stunts (and he looks kinda funny running and makes goofy faces when he punches, which makes the slow motion shots kind of endearing). 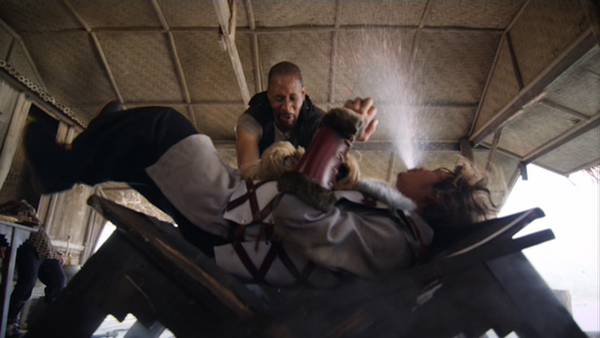 I also think the fights are shot more clearly by Reine, who acts as his own cinematographer. I’m not gonna say they’re better fights, since I prefer all the pulpy characters and their gimmicky weapons and wire-heavy Corey Yuen choreography in the first one. The Gemini Killers and their combining yin yang blades do cameo in the prologue, but otherwise it’s just normal guys in robes (and Cary-Hiroyuki Tagawa as the mayor). Still, the fights are well done, there is some enjoyable blood sprays, flying limbs and super-punches, and the large scale battles at the climax are particularly good, probly more elaborate than anything I’ve seen in a Reine movie before.

I mean, here are a couple shots to show you this is a pretty fuckin good looking DTV sequel: 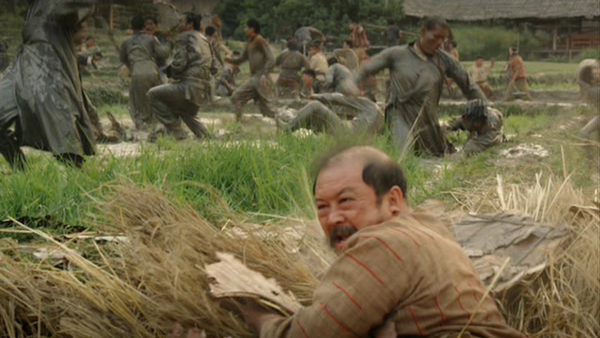 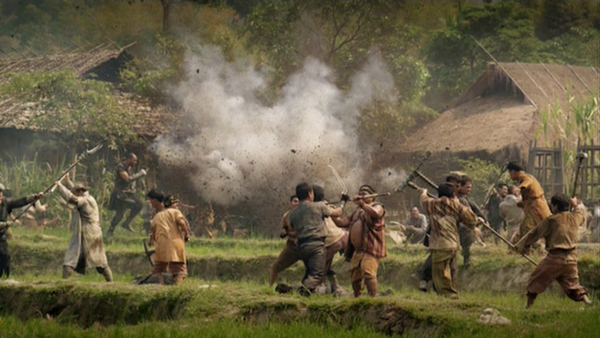 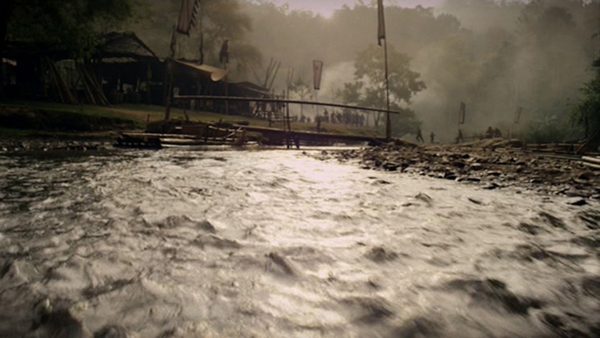 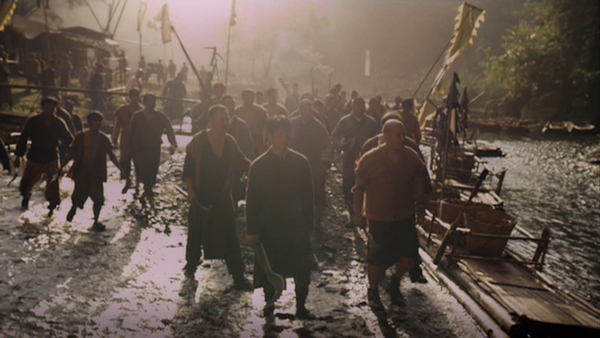 Neither the credits or the IMDb list a fight choreographer, but Reine refers to him as “Sang” on the commentary track and says it’s the stunt team that work on all of Tony Jaa’s movies.

Though lead villain Master Ho looks more normal than, say, Brass Body or Bronze Lion from the first one, he’s a good villain with a bunch of memorable total-fucking-asshole (TFA) moments. Three examples:

a) when the townspeople are gathered to mourn a dead girl he comments on how hot she is, spits on her corpse and tells everybody to get back to work

II) when a miner complains about their worn down tools he takes the tool from the guy and beheads him with it to prove that it’s still in working condition. Then he criticizes him for not putting in enough elbow grease 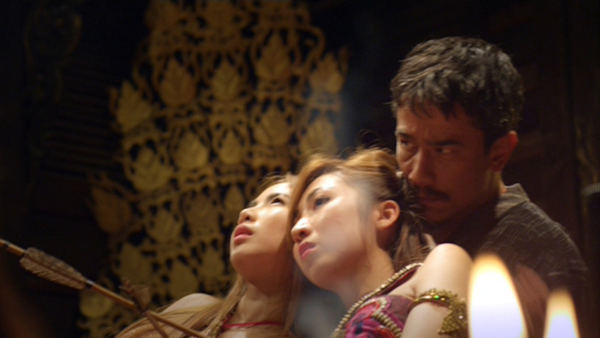 He (and other characters) also follow Silver Lion’s lead by talking in the accent and cadence of an English dub for a vintage kung fu movie. It doesn’t sound jokey, just like a loving tribute.

The music (score by RZA and Howard Drossin) is really good too, much more worthy of the RZA name than most of his non-GHOST DOG film scores. This time there’s a ton of spaghetti western influence, and the main theme is a piece from THE GOOD, THE BAD AND THE UGLY (“Ecstasy of Gold”) put over a hip hop beat. I also noticed a loop of some of Adrian Younge’s music for BLACK DYNAMITE (“Enemies All Around Me”). So the vibe of this movie is somewhere between Leone and Jai White. That’s about right.

Or it’s like a traditional period martial arts epic that the RZA happened to wander into and take over. And that’s my kind of movie. 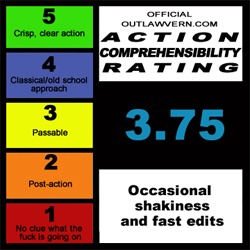 Cary-Hiroyuki Tagawa DTV DTV sequels Dustin Nguyen Roel Reine RZA Thailand
This entry was posted on Tuesday, April 21st, 2015 at 7:29 am and is filed under Action, Martial Arts, Reviews. You can follow any responses to this entry through the RSS 2.0 feed. You can skip to the end and leave a response. Pinging is currently not allowed.

14 Responses to “The Man With the Iron Fists 2”