Well, I’m not sure if we’ve reached that milestone yet, I might be cherrypicking my examples there. But add this to the evidence file: we got another DTV sequel that is clearly superior to the theatrical original. 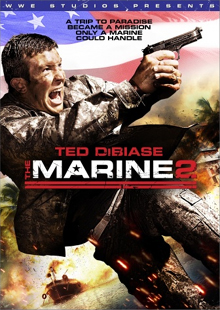 This one has been out for a while and at least one of you recommended it to me before, and I finally followed up on that once I made the connection that PISTOL WHIPPED and DEATH RACE 2 were both pretty good, both directed by this same guy, Roel Reine. Yes, my friends, the prestigious WWE Films have followed up their hugely disappointing PG-13 boring-version-of-COMMANDO with a solid, enjoyable UNDER SIEGE ripoff. (I would say DIE HARD ripoff but it’s more like UNDER SIEGE because he’s a soldier, he doesn’t do wisecracks and he has some help).

Part 1 starred WWE wrestler John Cena as the awesomely named Marine John Triton. Unfortunately Cena was lacking in screen presence and the movie was limp in between the great explosions that made up the trailer. (To be fair he was better in Renny Harlin’s 12 ROUNDS.) For part 2 it’s an unrelated Marine character now played by – well I’ll be damned – the one and only Ted Dibiase.

If you’re like me and you watched WWF wrestling in the ’80s then you remember The Million Dollar Man Ted Dibiase. Well, it turns out there’s a Ted Dibiase junior who is now a big time wrestler and is more of a crew-cutted muscleman type. He actually seems like quite a gentleman, which is a surprise having grown up with a cruel father who gets a boner from paying poor people to do humiliating things like lick his boots or crawl around barking like a dog. He was one of the great wrestling heels of the era, a chubby asshole in a shiny tuxedo-themed outfit (looked more like a kid’s Halloween costume than a real tuxedo) who bragged about his money and used it to force people to degrade themselves. Kind of like a cross between Andy Kaufman’s wrestling persona and THE MAGIC CHRISTIAN. Today kids are trained to admire rich people because they buy ridiculous jeweled watches made from the blood of African peasants, they name colognes and headphones after themselves, then their daughters make blow job videos and don’t wear underwear and that sprouts like six different reality shows so they start a record label and appear in movies and turn their friends into celebrities and then everybody who has sex on video with their friend also becomes famous and etc. That’s our royalty now, but in those days some people knew that rich people were cruel and and loved to degrade us and had black servants to carry their money for them. It was a way cooler theme for a wrestling villain than just “Russian guy” or “Iranian guy.”

But the wikipedia informs me that Ted Junior has retained the services of the Million Dollar Man’s stoic bodyguard Virgil. I bet little Teddy was raised and mentored by Virgil, sort of like Bruce Wayne’s relationship with Alfred or Annie’s with Punjab. I bet he grew up to honor the values of the working man instead of his prick of a father. I bet he’s trying to turn around the legacy of the Dibiase family and making things right. 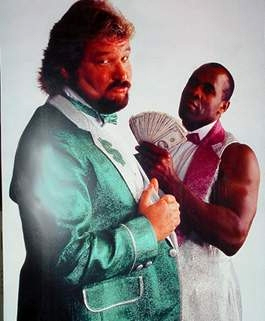 Oh, never mind, it says here that Ted Jr. was a real jerk, he stuffed a hundred dollar bill in Virgil’s mouth and fired him. I guess he just seems nice in movies. In the real world of wrestling it’s a different story.

Anyway, Dibiase plays an elite marine on leave from Afghanistan. He wants to go home but his PR-woman wife has to attend the opening of a beach resort in the South Sea Islands, and she’s allowed to bring him along. Unfortunately for their vacation, but fortunately for our home viewing experience, an army of rebel guerillas led by Temuera “Vern hasn’t seen ONCE WERE WARRIORS yet so he has to refer to him as Jango Fett” Morrison take some of the guests, including his wife, hostage.

At first the locals try to take care of it and send in a team of mercenaries. But Dibiase is a micro-manager when it comes to saving his wife from terrorists, so he insists on going on with them, which they are not happy with. There’s a great moment where almost on a whim one of the mercs hands him a sniper rifle and lets him take a difficult shot. When he nails it suddenly they respect each other. But some other things go wrong.

Dibiase isn’t a charisma explosion like The Rock or somebody, but I thought he was very likable in a boy scout type of way, an old fashioned square-jawed, broad-shouldered, crew-cutted All-American asskicker with a sense of justice, expert marksmanship and unexplained body slamming skills. This is a surprise because not only is he the DTV replacement for a somewhat wooden original, but he was also the last minute substitute for some other wrestler I know nothing about who had to drop out because of an injury.

One nice treat is that Michael Rooker is in it and actually has a good supporting role. He runs scuba tours on the island and has a friendly rivalry with the marine because he’s ex-army. In a trustworthy action movie this means he’s gonna help out later, and this happens to be a trustworthy action movie. In fact I think the camaraderie between these two is one of the highlights of the movie.

Reine has proven himself a dependable DTV director, with a solid sense of story and focus on characters. But until now I haven’t noticed his action standing out as anything special. Most of the violence here is decent to good. Alot of it involves people getting shot or blown up and falling off of balconies. But there’s one really standout fight scene where Dibiase takes on two guys at the same time, pitting his hybrid military-WWE style against Muay Thai. And the scene is very uniquely constructed filmatically speaking.

At first it’s what you expect from a movie starring a wrestler – every one or two punches and kicks is a separate shot. It’s not too fast, you can follow it, but it doesn’t have the kind of jolt I’m looking for. Then all the sudden there’s a shot that goes on for 30 full seconds with multiple moves, some of them pretty complex, people getting flipped and thrown into things. The camera doesn’t stay still – actually, it rotates around the fighters, but it’s very clear easy to follow, and it looks cool.

When it finally does cut the next shot is about 20 seconds long before it goes back into shorter cuts. So there is a good chunk of uninterrupted action in there. You don’t usually see that these days.

I was so impressed with this scene that after the movie was over I went back and watched it again to study how it was put together, and then I checked and found that indeed there was an extra called “East Meets West” where they talk about the making of the scene. Reine says that he intentionally started out with short cuts to make it seem like a normal Hollywood approach to action, before going into the longer shots. I’m not sure I understand his motive behind that but it makes for a good comparison for scholars like us, to show how much more exciting long takes are in fight scenes than quick cuts.

The fight also has a nice move where he kicks a guy’s head through a wooden plank, and the featurette is really interesting because it explains how they did it: they had him kick a guy’s head through a wooden plank. Of course it was not very strong wood, but they show how he actually had to kick the guy hard to try to get it through, and he failed the first couple of times. I’m sure Dibiase is used to taking alot of hits in the ring (and seeing it happen to other people, since his dad, two brothers, grandma and step-grandpa were all pro wrestlers) so it means something when he’s in complete awe of the toughness of the Thai stunt crew.

One of the other action highlights is a foot chase. I noticed that in this scene Reine has some wobbly handheld COPS or LAWMAN type shots, but these always switch to clear, steady shots and plenty of overheads to show the layout of where the characters are, where they’re headed and what they’re surrounded by. I think Kathryn Bigelow did something similar in that great foot chase in POINT BREAK. Wherever Reine got it from I think he’s doing it exactly right – injecting a little shakycam flavoring for that visceral deep-in-the-shit thrill so many directors are foolishly looking after, but without sacrificing the important ingredient of knowing what the hell is going on in order to be excited about it.

There’s nothing real original about this movie, it’s all based on cliches and formulas. But these are cliches and formulas that most filmatists these days just abuse and take advantage of us with. Reine actually makes a solid, enjoyable movie out of it. Congratulations to Reine, WWE Films and the Dibiase family. And Virgil if he helped at all.

Die Hard on a _____ DTV DTV sequels DTV sequels better than theatrical originals Michael Rooker Roel Reine Ted Dibiase Temuera Morrison WWE Films
This entry was posted on Sunday, February 13th, 2011 at 12:18 am and is filed under Action, Reviews. You can follow any responses to this entry through the RSS 2.0 feed. You can skip to the end and leave a response. Pinging is currently not allowed.