Like STONE COLD or COBRA, TACTICAL FORCE begins with our cop heroes using excessive force to stop an armed robbery at a grocery store. Unlike those movies it has no style and feels amateurish. I was already losing hope even before Steve Austin and Michael Jai White drove up in a SWAT truck together and didn’t look cool. That’s two of my favorite guys right now, I never expected to see them do a movie together, and you give them an entrance like this? I’m sorry, I know you need to protect the head, but Michael Jai looks goofy wearing that big ass helmet. Let him be fake for a second so he can start the movie looking cool.

That opening scene shows us that this Force doesn’t really put much thought into their Tactics. Their whole strategy hinges on the robbers not ever shooting at them. Fortunately it works. Austin, being Stone Cold Steve Austin, puts his gun down, then charges the guy and does some WWE on him. MJW shoots a guy with his childhood BB gun, which he still carries for good luck. Tactical Force Team Member #3 Steve Bacic throws a filet mignon at a guy. There’s a girl on the team too (Lexa Doig) but I don’t think she does anything. 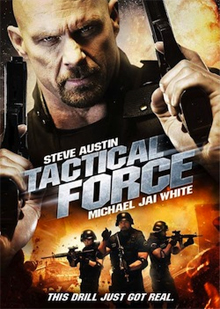 The team naively believe they’re gonna be commended for saving the hostages – obviously they haven’t seen those other movies I mentioned. As they get yelled at and  later have to take a re-training class it feels more like a POLICE ACADEMY than a serious action movie. But it gets more serious when they go to a warehouse for unchaperoned testing and there happens to be a business deal going down between Russian gangsters and some other guys over a PULP FICTION style McMuffin briefcase containing “the item.” But they don’t have their real ammo with them, or their radios, or cell phones, and they have to figure out how to get out of there.

Their opponents include the white guy from IP MAN 2 (Darren Shalavi) and Keith Jardine as the expert they call in for emergencies. When the goateed UFC legend comes bald-head-to-bald-head with Stone Cold you just see Jardine punching toward the camera and suddenly he has Stone Cold in cuffs. Stone Cold says, “You got a drop on me this time, but it won’t happen again, buttercup.”

Two things about that line:

1. Most people sarcastically calling somebody “buttercup” would just come across as a smarmy prick. For example, the white guy from IP MAN 2. He’s a very good martial artist, but if he called somebody “buttercup” it would just seem like such a forced insult. Only a big gruff guy like a Steve Austin, or perhaps a Danny Trejo, can call somebody “buttercup” and it’s funny. “Cupcake” or “Sugartits” would also work, as long as it’s not a lady he’s talking to, then it just seems inappropriate.

2. I love these type of promises in action movies, these vows of future asskicking. But I’ve been betrayed by so many of them lately that more than anticipating an Austin vs. Buttercup brawl I just got nervous that it wouldn’t happen. So I’ll save you guys the stress by telling you that yes, they have a fight later on. Stone Cold does some jiujitsu moves, which I didn’t expect. One of the better parts of the movie.

To a lesser extent I was anticipating the MJW vs. white guy fight, at least after I realized it was that Shahlavi guy and that it would be stupid to put him in an action movie and not have him do some kicks. But when the fight did happen I have to admit it kinda bothered me that suddenly these two guys who have shown no previous evidence of martial arts skills are suddenly doing moves like that. I shouldn’t complain because usually I like that sort of absurdity, but it kinda stuck out in this one. MJW has an interview on the blu-ray where he talks about making his fighting styles fit his characters but I don’t know man, this seems like your usual badass MJW poses, kind of over-the-top for an underachieving cop. When does he have time to train for that shit?

And for a SWAT team these guys sure don’t get to use alot of SWAT tactics. Or even acknowledge that they’re stuck in a situation where they don’t get to use their usual bag of tricks. The script is also goofy in that it sets up this whole thing about the boss being mad at them for their recklessness and property damage in hostage situations, then puts them in a dilemma that involves no hostages or damageable property. It also brings in a bunch of plot complications in the epilogue that seem to have no purpose unless they’re planning a sequel. Which would be pretty presumptuous.

The movie looks very cheap and plain and is shot with a small cast mostly in a generic warehouse. Whenever Austin gets to fight the choreography seems pretty good but they unwisely use some kind of video effect that makes the frames vibrate. I think it’s supposed to make it look like he has Hulk strength and is making the whole earth (maybe even the fabric of reality) shake, but it looks like something you could do to your home videos on iMovie. I felt the same about the annoying whip pan effect they use every time they cut from a good guy scene to a bad guy scene.

This is a shitty movie, but I will give it credit for allowing Stone Cold and MJW to use some of their charms. MJW in particular gets to play a funny character who’s a badass but kind of dumb and not in charge like he usually would be. He actually got one really big laugh out of me. I won’t give it away but it involves him doing a poor job of coming up with something cool to say as he launches a grenade at some guys. But actually he’s so cool that he almost makes the ridiculous thing he says work. Almost.

Also I got a kick out of the scene where they see what’s in the McMuffin without showing it to the audience (yeah, that old move) and he dramatically says “This changes everything.”

As soon as I read about this movie I thought a Steve Austin/Michael Jai White team-up was too good to be true, and I assumed MJW’s character would die early on. So that’s the good news, they really are both in the whole movie together as a team, it’s not one of them in a cameo. And they both do good work, it’s just that the movie around them is not what they deserve.

On the extras Austin talks about being a big fan of MJW and wanting to work with him for a long time and how he suggested casting him. It seems like they genuinely are friends now, so it would be nice if they got to make a better movie together. They do have a good chemistry. Even a return to these characters would be cool if it had much better direction.

Darren Shahlavi DTV Keith Jardine Lexa Doig Michael Jai White Steve Bacic Stone Cold Steve Austin
This entry was posted on Sunday, August 28th, 2011 at 11:55 am and is filed under Action, Reviews. You can follow any responses to this entry through the RSS 2.0 feed. You can skip to the end and leave a response. Pinging is currently not allowed.