White plays Jesse Freeman, ex-special-ops guy who has a new job as a stadium security job after rehabilitating from some shrapnel he got after escaping torture and kung-fu-ing insurgents overseas. His wife (Sagine Sémajuste) thinks he’s away from the family too much, so he brings his worshipful daughter Mara (Nakai Takawira, Young Simone Biles, THE SIMONE BILES STORY: COURAGE TO SOAR) and unimpressed son Ryan (Lyric Justice) with him when he works the opening game for the Phoenix Falcons. You know, of the National Basketball League. END_OF_DOCUMENT_TOKEN_TO_BE_REPLACED 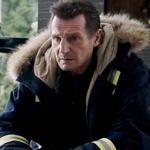 Nels is a little nervous about having to make a speech after winning Citizen of the Year. Otherwise they seem to have a nice comfortable lifestyle going when all the sudden Kyle turns up dead – we know he was murdered by drug dealers, but the coroner (Jim Shield, SHANGHAI NOON, who looks like a more hard living Chris Pine) says it was a heroin overdose. Nels is so broken up he puts a shotgun in his mouth but when he’s interrupted by Kyle’s bloodied and apologetic friend Dante (Wesley MacInnes, POWER RANGERS) and learns what really happened, it’s not long before he’s sawing off said shotgun to fit in his jacket and go trying to find the people responsible. END_OF_DOCUMENT_TOKEN_TO_BE_REPLACED

This one is about Amy (Danielle Harris, MARKED FOR DEATH, THE LAST BOY SCOUT), a medical examiner working a long shift on her birthday. Geeky co-worker Seth (Kaj-Erik Eriksen) surprises her with a cake. I’m not sure about eating something that was put under a blanket on a slab in the morgue for a surprise, but I guess movie morticians are always eating big sloppy sandwiches while they work to show how over it they are. This is tame in comparison. END_OF_DOCUMENT_TOKEN_TO_BE_REPLACED Part 1: failed call and introduction of the spectacular call center where our heroine will spend 2/3 of the movie. END_OF_DOCUMENT_TOKEN_TO_BE_REPLACED