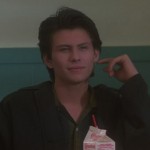 Hey folks, Harry here… I feel it’s my duty to bring this Vern review – as I was amongst the first to herald the genius of Paul Verhoeven’s HOLLOW MAN… sadly the version I saw well in advance of the release of that film is not the film that everyone else saw. I still like the one that was released, but no where near the longer edit which I feel was far far better. Well here’s Vern with a look at the much needed sequel! Here ya go…

Well in this particular case, I am gonna have to step forward. I am the guilty party. They are clearly making this movie for me, and I can prove it. 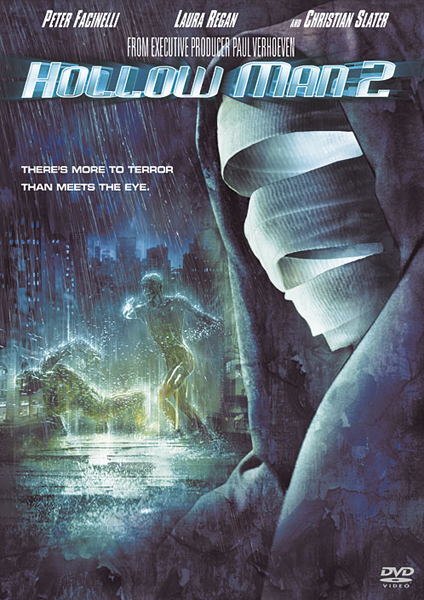 Exhibit A: I am the only recorded case (Click Here) of a person who enjoyed THE HOLLOW MAN in the first place. The HM2 packaging describes it as a “sequel to the $73 million box office hit,” but let’s be honest here. Buying a ticket does not equal getting your money’s worth. I have never met another person who enjoyed this movie. I stand alone on this one.

Exhibit B: I am also one of the rare individuals who watches DTV sequels. I mean there’s a few of us out there and we’ll pop up in the talkback. But we are a minority in this world. DTV sequels are really designed to sit on the shelves at Blockbuster. They don’t have to ever rent, they just have to be bought by the chain in the first place.

Exhibit C: To sweeten the pie for me, they made this one take place in my home town of Seattle. “Hey Vern, remember that movie that only you liked? Well we made a DIRECT TO VIDEO SEQUEL to it. And it takes place in SEATTLE. There’s a couple shots of the Space Needle and everything. The hero wears a Mariner’s hat in one part.” I would feel guilty if I didn’t watch this movie because they obviously worked hard to please me.

Unfortunately, HOLLOW MAN II also follows in another grand DTV tradition. It’s a dumb enough idea to draw me in but not dumb enough to be very enjoyable. This is of the competently made variety, it’s actually not that bad, but it’s obviously cheap compared to the original and devoid of the crazy perverted Verhoeven touch. (Original HOLLOW MAN director Verhoeven is credited as executive producer, which probaly just means they called him up and he answered.)

The movie opens with an invisible attack at some kind of rich person’s charity ball or something. A drunken doctor gets beaten by an invisible Christian Slater in front of everybody, then dragged to the bathroom and slashed to death with the inside of a cell phone. These type of scenes are the only really enjoyable parts of the movie, even though they’re all gimmick and not all that original. It’s still kind of fun to see somebody get dangled out a window by an invisible man and that kind of thing.

Early on the movie promises to have the same kind of horrible dialogue as the original, but it only has a few keepers. Invisible Christian Slater gets to say, “Don’t tell anyone I was here. You never saw me.” (Which is not only a bad play on words but is kind of pointless since he kills the guy he says it to.) Also there’s a part where a guy says, “You’ve got an invisible assassin out there fighting his own war,” which I’m guessing will be in the trailer that you’ll see before that Van Damme movie SECOND IN COMMAND.

Oh yeah, and in the same scene there’s the line, “Griffin’s always operated on the edge of anarchy. When he goes into combat he goes deep, he goes black.”

Anyway, enough about corny dialogue. When two detectives from the Seattle PD (Peter Facinelli and some lady) show up they learn that the dead doctor worked for Reisen, “a think tank over in Redmond.”

“And on occasion we do… more than think,” says the company’s namesake.

The “more than thinking” they’re doing is of course turning people invisibile, continuing the experiments of Kevin Bacon’s Sebastian Caine character from part one. A wacky scientist in that movie worried what would happen when the military started messing with invisibility, and this is it. Christian Slater, it turns out, is a special ops soldier that would’ve been court martialed for war crimes in Iraq but he saved his ass by volunteering to become an invisible assassin.

They used him to murder their political enemies, and then he just started killing other people. That might be to cover his tracks or it might be for fun, the characters don’t seem to agree. He killed the doctor to find out the name of scientist Maggie Dalton (Laura Regan), who we find out in a flashback he already knew the name of. I guess he’s stalking her so he can force her to give him the “buffer” that will keep him alive, which is what she intended to do in the first place. Slater also mentions “finishing the mission,” which I guess means just continuing the killing spree. The truth is, it’s hard to really ascertain the motives of these hollow men. All we really know about them is they like to show off by stepping in puddles or running around in the rain or getting blood splattered on them. It would be easy to lay low, because nobody’s looking for a hollow man most of the time. But no, they gotta make footprints in the grass and splash people with their coffee and jump through glass and shit like that. When invisible Christian Slater happens to be in the room with some teenagers making a sex tape and gets spotted on their nightvision, he gratuitously walks past the camera 3 or 4 times. When he attempts an invisible kidnapping he can’t just be quiet, he yells out “GOTCHA!” I guess they get so tired of not being noticed that they overcompensate.

Facinelli is the hero, he protects the scientist from Christian Slater and then sneaks her out of the holding cell and keeps her away from the other cops (since they’re helping cover the Pentagon’s ass). At one point they do the old kissing routine where a cop is driving by shining a light so he grabs her and kisses her. Now, I’m never gonna be a cop, but if I was, I think I would just drive around looking for people who are kissing. Those are obviously the guilty ones. Even regular citizens need to look out for that trick. I mean, if the joggers in RAISING CAINE (Click Here) checked and saw that John Lithgow was kissing a woman he just choloroformed, that would’ve saved lives. Anyway, the cop and the scientist run around trying not to get killed and uncovering the secrets of the nefarious Pentagon and Redmond think tank fuckers that are doing all this invisible stuff.

By the way, Seattle actually has quite a history of dangerous scientific tinkering. The guy who invented the super-intelligent fighter jet in STEALTH (Click Here) was based here, and so was the kid from WARGAMES. So it’s not that surprising that Sebastian Caine’s crazy invisibility project is set up in the area. Unfortunately, I don’t think the movie itself was shot here. There’s a couple helicopter shots of downtown but I didn’t recognize any actual Seattle streets. Somebody let me know if I’m wrong but I’m guessing it’s really shot in Vancouver like everything else.

Slater was Hollow Man #3. #2 we meet later, he is Good Guy Hollow Man. The first time we find out about him, he’s in an elevator talking to a blind lady. Ha ha, she’ll never know. But in his next scene he’s not invisible. Apparently after you’ve been invisible for a while you start to get multiple rare forms of cancer and your face turns all mutated and you turn “more visible.” So this guy has some special effects makeup on but he’s the least impressive invisible man you’ve ever seen, since he’s not invisible.

But never fear, Facinelli decides to inject himself and turn invisible, so we do get some invisible man on invisible man action. In part one Phil Tippet’s boys came up with an invisible man in the rain. The poor suckers who had to take over with a way lower budget for the sequel had to top that so they give us TWO invisible men in the rain. TWICE THE THRILLS. TWICE THE TERROR. (as it says on the back of the screener.) The effects obviously aren’t as impressive as in part 1 but they do come up with some pretty good gimmicks, like Slater gets stabbed by a pen and you see the ink going through his invisible veins.

But sadly this is more a memoir of invisible men than of hollow men. Kevin Bacon was hollow because they squirted latex on his face so he looked like an empty Michael Meyers mask walking around. Christian Slater does not have the same kind of dedication to being on set, so most of his role is a voiceover. There is one brief flashback where you actually see him, and a couple other scenes where he’s an empty hoodie driving a car and things like that, where maybe it was him, maybe it wasn’t. Maybe the funniest one is near the end where he’s wearing a blue mask over his head and sunglasses. And you have to wonder if he’s really supposed to be wearing a blue mask or if they forgot to do the invisible effects for that scene.

This has above average watchability factor for DTV, but it’s like MIMIC 2 or CUBE 2 or something, you forget it right away. The original HOLLOW MAN was a dumb fucking movie, but it was always eager to go a step further than you expected or to surprise you by showing the invisible man naked or piecing together a gorilla from the inside out or weird ass Paul Verhoeven shit like that. HOLLOW MAN II is more content to just be a normal invisible man thriller with some cheap imitations of the effects from the first one. You take a dumb script and give it the Verhoeven touch, then one person (me) enjoys it. You take a dumb script and just treat it regular, then nobody’s gonna enjoy it that much.

One of the advantages of making a DTV sequel is that you can sequelize a movie nobody wanted to see sequelized, like this one. But another advantage is that nobody watches it, so why don’t they go hog wild? Do something crazy. Come on DTV people, you need some more excitement in these things. The one scene in this movie where I felt like I was seeing something I didn’t expect was a little bit where the scientist has no pants on and she’s being dragged backwards across a pedestrian bridge, wiggling her legs around and screaming “HELP ME!” as innocent bystanders give her a “What the fuck is your problem?” look.

That was a good one. I want more of that.

HOLLOW MAN II comes to DVD on May 23rd. Everybody commit that to memory.

Christian Slater DTV DTV sequels
This entry was posted on Wednesday, April 12th, 2006 at 5:38 pm and is filed under Action, AICN, Horror, Reviews, Science Fiction and Space Shit, Thriller. You can follow any responses to this entry through the RSS 2.0 feed. You can skip to the end and leave a response. Pinging is currently not allowed.