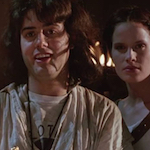 College students China (Michelle Johnson, BEAKS: THE MOVIE) and Sarah (Deborah Foreman, REAL GENIUS) notice a wax museum in a residential area (“Kind of a weird place to have a waxwork” – I like how this movie acts like “waxwork” is a totally normal word everybody knows and uses casually.) A strange man (David Warner, TRON) appears and invites them to return at midnight with no more than six people for “a private showing.” So they convinced their friends Gemma (Clare Carey, ZOMBIE HIGH), James (Eric Brown, Mama’s Family), Tony (Dana Ashbrook, RETURN OF THE LIVING DEAD PART II) and Mark (Zach Galligan, who had only done GREMLINS and NOTHING LASTS FOREVER) to come with them. END_OF_DOCUMENT_TOKEN_TO_BE_REPLACED 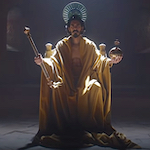 It’s based on an anonymous 14th-century poem called Sir Gawain and the Green Knight. And I tend to like movies based on anonymous poems, judging by the only two I can think of, BEOWULF and BEOWULF. I never heard of this one, but it has been adapted before, including as SWORD OF THE VALIANT, which I went ahead and watched afterward. And I certainly didn’t get this from the movie, but Sir Gawain (Dev Patel, CHAPPIE) is one of the members of King Arthur (Sean Harris, PROMETHEUS)’s Round Table. END_OF_DOCUMENT_TOKEN_TO_BE_REPLACED 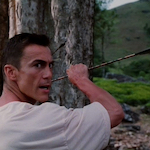 One odd continuity with part II is that it has a wraparound where the movie is a story being told to a kid. In part II it was Master Sun (James Wong) telling kids in his martial arts class how Alex became a good person. This time it’s Alex telling his ten year old son Jason (David Schatz, AMBROSE BIERCE: CIVIL WAR STORIES) a story about his life “living in the far east as a very successful gambler.” He notices Jason upset late at night, finds out he got suspended from school for beating up three eighth grade bullies, and decides to take him for a camping trip. So Alex figures it’s time to tell his son – who has been training in martial arts – that he was the Kumite champion (“Cool!”) and then about something that happened while he was “living in the far east as a very successful gambler.” It’s pretty cool, because most fathers, when their son gets into trouble at school, aren’t able to whip out a “the time I tried to avenge a murder” story. END_OF_DOCUMENT_TOKEN_TO_BE_REPLACED

You know John-Rhys Davies? I believe he’s the dwarf in the Lords of the Rings, but he’s best remembered as Sallah, loyal friend in the Indiana Jones pictures and passionate explainer of seatbelts in the Indiana Jones Disneyland ride. IN THE SHADOW OF KILIMANJARO is the story of Sallah’s further adventures as a mine operator in Kenya. The credits don’t call him Sallah, they call him “Chris Tucker.” But you tell me which is more likely: John Rhys-Davies is playing Sallah again, or John Rhys-Davies is playing Chris Tucker? I rest my case.
END_OF_DOCUMENT_TOKEN_TO_BE_REPLACED