You know John-Rhys Davies? I believe he’s the dwarf in the Lords of the Rings, but he’s best remembered as Sallah, loyal friend in the Indiana Jones pictures and passionate explainer of seatbelts in the Indiana Jones Disneyland ride. IN THE SHADOW OF KILIMANJARO is the story of Sallah’s further adventures as a mine operator in Kenya. The credits don’t call him Sallah, they call him “Chris Tucker.” But you tell me which is more likely: John Rhys-Davies is playing Sallah again, or John Rhys-Davies is playing Chris Tucker? I rest my case. 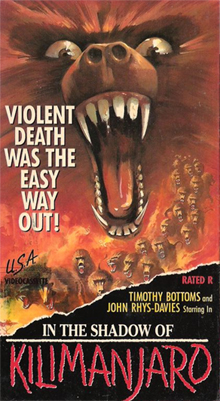 The hero of the movie is Timothy Bottoms, who had some success in a sitcom and a TV movie playing George W. Bush, and in this movie is playing a conservationist out in the bush. He goes around nursing rhinocerouses and has a zebra and a cheetah on his property and carries monkeys around and has a girlfriend that I thought was Erin Gray but turns out her name is Irene Miracle. And back in ’84, the way I remember it, it was kind of a miracle to have two ladies that looked like Erin Gray. It was a more naive time.

Jack gets called in to help some tribesmen find a lost kid, but all they find is an arm. So he figures out what we’ve known since the first scene: the baboons around this joint are on a fuckin rampage. There’s a bad drought that’s been starving the animals but most of them move on looking for sustenance. Baboons are more territorial, so they stick around and sometimes will even eat each other. This time they’re getting clever and eating humans. They are intelligent, they are organized, and they don’t vote. They just eat.

Jack tries to convince union man Chris Tucker to close his mine and get his crew to safety, but his contract on the mine is expiring soon and he refuses to lose any time. So Jack goes to the government, but they won’t evacuate the place because the drought is country-wide. There’s nowhere to evacuate anybody to. Everybody’s fucked until it rains.

So then it becomes a survival tale with a bunch of baboon attacks. There are some goofy puppet shots every once in a while, but it’s mostly real baboons. They have them swarming from the hills (almost looks like CGI at times, weirdly), stampeding towards people, climbing all over the place. They don’t always look hungry and vicious, but I don’t know man. Baboons creep me out. They look intelligent but not empathetic. They look like they don’t give a fuck. You look a baboon in the eyes, he’s not gonna nod his head like “what’s up?” He’s gonna have nothing but contempt for you. There’s no making friends with a baboon, unless you’re Dr. Benway. (literary reference – yes, I’ve read books before)

The part that impressed me most is the long slo-mo shot of Irene Miracle falling down and getting back up with a herd of baboons right on her tail. I’m sure they were well trained but you still would probly get hurt if that many ran into you. I’m telling you. Baboons don’t give a fuck about you and they don’t give a fuck about stunt safety. That was a daring scene to shoot, in my opinion.

The baboons do eat some humans. They’re good at trapping people – a guy in a car, a guy on a telephone pole, some people in a small plane. That’s fucked up, man. So dedicated to the baboon cause that they’re willing to blow themselves up in a place crash. Add this to the questionable list of things that predicted 9-11.

I gotta tell you though, the part that scared me most wasn’t an attack at all, it was the part with the rhino at the beginning. There’s this chase like the beginning of JURASSIC PARK 2 and then they catch up with this rhino. I don’t spend too much of my day thinking about rhinos so when I look at footage of one of those things suddenly it occurs to me jesus, it basically is a dinosaur, how did they get Timothy Bottoms to walk right up to it and pretend to put medicine in its eye? The guy’s got balls. I bet they did that shot last just in case.

The whole thing is filmed on location in Kenya, so it has a sense of authenticity with the locations, the locals and the animals. But to be honest it’s a sloppily put together movie. I might’ve missed something, but it seemed like there was some weird continuity. I didn’t catch when Jack shaved his bushy beard off half way through, that was weird. And what was up with the part where Chris Tucker tells Jack’s girl that Jack is dead, then later runs into him and doesn’t seem surprised that he’s alive? And there’s lots of awkward transitions where somebody’s being attacked and then, oh, they’re safe now, fade out and they’re in a totally different place and everything seems fine. There’s not alot of build, just a series of little episodes. I guess it doesn’t help that there’s no goal, they’re not trying to get to some place or do some thing. They’re just trying to not die for a while. Then (SPOILER) it rains, so everything’s better. I’d think they’d have to wait for some plants to grow, but they seem to think it’s instant safety.

The director, Raju Patel, never directed another movie. But he did produce BACHELOR PARTY, CYBORG 2 and the Stephen Sommers version of THE JUNGLE BOOK. Apparently he started a “Neverland Pictures” with Michael Jackson, but they never made any movies. He died in 2005.

In conclusion, this movie is only okay, and should obviously be called KILL-IMANJARO.
.

Chris Tucker John Rhys-Davies primate horror Timothy Bottoms
This entry was posted on Thursday, October 21st, 2010 at 3:40 am and is filed under Horror, Reviews. You can follow any responses to this entry through the RSS 2.0 feed. You can skip to the end and leave a response. Pinging is currently not allowed.

47 Responses to “In the Shadow of Kilimanjaro”