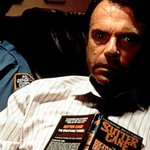 He tells a psychiatrist (David Warner, MONEY TALKS) his story. It all began when he was hired to find the missing author Sutter Cane. Cane is a giant Harry Potter sized phenomenon, described as “bigger than Stephen King” (who he shares a font with) but his stories sound more like H.P. Lovecraft with their unleashings of indescribable evils and what not. This all takes place during a rash of riots and mental health incidents across the country, one of which Trent happened to be a victim of. END_OF_DOCUMENT_TOKEN_TO_BE_REPLACED 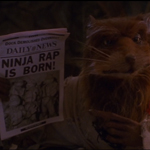 It seems like a pizza deliverer would be the most desirable possible friend for these turtles, because you see they love pizza is one of the main things we have learned about these characters through years of development in many different mediums, from years of comic books, several different animated series, one live action series, one animated movie, two live action(ish) movie franchises and a live tour. Still, they brush him off and return to Splinter-prescribed secrecy until Keno spots them in the apartment while delivering more pizzas. Splinter gives him some fighting and meditation training but tells him to stay out of their fight against Shredder. Keno completely ignores this, and there are no negative consequences. You don’t know what the fuck you’re talking about, rat. Who oozed and made you talk, anyway? END_OF_DOCUMENT_TOKEN_TO_BE_REPLACED

But I’m doing this thing so let’s do it. END_OF_DOCUMENT_TOKEN_TO_BE_REPLACED

Then the movie came out and you didn’t hear about the excitement anymore. I don’t know if it was a PHANTOM MENACE (they didn’t like it as much as they hoped) or a KICK-ASS (every single person who would like that type of movie was inside that convention). And it probly didn’t help that the original TRON didn’t exactly set the world on fire either. Until the sequel got announced I honestly didn’t realize there were people who were passionate about it.
END_OF_DOCUMENT_TOKEN_TO_BE_REPLACED