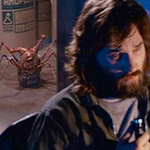 “I don’t know what the hell’s in there, but it’s weird and pissed off whatever it is.”

In snow, no one can hear you scream. ‘Cause it’s cold. They stayed inside.

John Carpenter’s THE THING (1982) – not to be confused with Christian Nyby’s THE THING FROM ANOTHER WORLD (1951) or Matthijs van Heijningen Jr.’s THE THING (2011) – is straight up one of the best horror films achieved by mankind so far. It’s relatable but extraordinary, simple but original, blunt but ambiguous. It has quite possibly the most brilliant creature effects ever devised, or at least the only monster arguably weird enough to top ALIEN in the “well, shit, I never even thought of seeing anything like that!” department.

The Thing crash landed on earth some 100,000 years ago, and has only recently been unfrozen to raise a ruckus. A pessimist would say (as Wilford Brimley’s Blair does in the movie) that this is the type of shenanigans that could end the human race in a couple of years. An optimist would say hey, let’s just be thankful the flying saucer didn’t land properly in the first place, we got an extra 100,000 years out of that. END_OF_DOCUMENT_TOKEN_TO_BE_REPLACED

It starts cute with undiscovered genius Seth Brundle (DEATH WISH‘s Jeff Goldblum) awkwardly hitting on magazine reporter Veronica Quaife (THE LONG KISS GOODNIGHT‘s Geena Davis) and somehow getting her back to his lab, which she’s not happy to learn is also his bachelor’s pad. She’s skeptical and probly a little creeped out until he demonstrates what he’s secretly been working on: “telepods,” a set of chambers that can disintegrate matter on one end and reintegrate it on the other. Teleportation. Star Trek shit! He points out that it will revolutionize transportation. In one of the few corny bits in the screenplay by Charles Edward Pogue (PSYCHO III, KULL THE CONQUEROR) we find out Brundle gets car sickness as extra motivation for inventing such a thing.
END_OF_DOCUMENT_TOKEN_TO_BE_REPLACED ROBOCOP 2014’s goals and tone are very different from Mr. Verhoeven’s 1987 classic, but it’s the rare remake that’s arguably even more directly political than the movie it’s based on. Most would say, and I agree, that Verhoeven’s (or really Neumeier and Miner’s) message about privatization and corporate greed is more powerful because of its hilarious bluntness. It was the sarcastic cop movie that Lee Iacoca and Ronald Reagan’s America was asking for, a movie where amoral corporate assholes run the police force for profit, turn a dead body into a cyborg cop, then unleash him to do high caliber battle with savage DEATH WISH style supercreeps and get mixed up in a feud within the company, reconnect with his old self and turn on them. END_OF_DOCUMENT_TOKEN_TO_BE_REPLACED

But I was really jonesing to watch DAWN and DAY of the dead before Halloween this year so I decided to do a historically inaccurate color trilogy by substituting the 1990 remake of NIGHT OF THE LIVING DEAD, which I hadn’t watched in some time. END_OF_DOCUMENT_TOKEN_TO_BE_REPLACED To me the most memorably fucked up scene is the one where he’s handcuffed himself to a mannequin that has a real woman’s scalp attached, and he’s crying and he says, “I’m so happy.” And then later there’s one of my all time favorite turnarounds where this sicko leaves the private world of his dingy apartment, he goes into the city in the daylight, and it turns out he knows people. He’s wearing sunglasses and he’s hanging out at a photo shoot. They think he’s cool! Great movie.
END_OF_DOCUMENT_TOKEN_TO_BE_REPLACED

I guess I never saw the original FOOTLOOSE before, ’cause I always thought it was about a town where you’re not allowed to dance because they’re real religious. In this remake by Craig Brewer (yes, HUSTLE AND FLOW, BLACK SNAKE MOAN Craig Brewer) the ban happens in response to a great tragedy, when five promising high school teenagers are killed in a head-on collision after a dance. In other words, this movie is about the Patriot Act. END_OF_DOCUMENT_TOKEN_TO_BE_REPLACED

The tone is completely serious, but all in fun. It’s not trying to punish you, like a Rob Zombie movie, but it is trying to make you wince and feel sympathy pain. That’s why the opening scene is (SPOILER) an old man crying and apologizing as he chisels out his maid’s front teeth. After that you know the movie is boss so you better just shut the fuck up and do what it says.
END_OF_DOCUMENT_TOKEN_TO_BE_REPLACED

So please imagine I wrote a brilliant, in some ways moving and definitely mind-expanding and film criticism re-inventing review about how it was a very original and well made movie, I liked how the kids talked like kids and it didn’t really feel like any movie I’d seen before, pretty good, etc. Way to go, Swedes.
END_OF_DOCUMENT_TOKEN_TO_BE_REPLACED

There once was a director named Chuck Russell, who did movies like THE MASK and ERASER. Not very good movies as I remember it, but he seemed like his heart was in the right place. He was trying to have some fun. He also did THE SCORPION KING, which I enjoyed, and then disappeared for the last couple years. But before he became The Occasional Director of Studio B-Movies he was a promising name on the ’80s horror scene. His debut was A NIGHTMARE ON ELM STREET 3: DREAM WARRIORS, the ridiculous but fun one that reinvented the series and gave Freddy his obsession with the word “bitch.” He wrote that one along with future THE MIST director Frank Darabont, who also helped him write movie #2, his remake of THE BLOB. END_OF_DOCUMENT_TOKEN_TO_BE_REPLACED