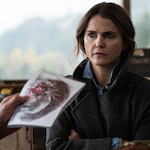 In a small, depressing town in Oregon, ravaged by economic despair and opioid addiction, out crawls a monster to make shit even worse. Come on, read the room, monster. We don’t see him clearly for a while, we don’t know what he’s up to at first, or how he works, but we get his general vibe. Uncool.

We see this story primarily through the eyes of elementary school teacher Julia Meadows (Keri Russell, MISSION: IMPOSSIBLE III, DAWN OF THE PLANET OF THE APES, STAR WARS: THE RISE OF SKYWALKER, and I believe I heard she was in a ‘90s television show created by the directors of those films, not sure about that, probly mistaken), who is not in a great spot. She moved out of town when she was young, but has recently returned to find it not as good as it even was then. She temporarily lives in her childhood home with her brother Paul (Jesse Plemons, BATTLESHIP) and every day goes to the store and stares longingly at the liquor shelf while she buys a pack of gum or something.

She has trouble getting all but one of her students to engage at all in class, but she tries. For example she calls on Lucas Weaver (Jeremy T. Thomas, “School boy / classmate,” DOLLY PARTON’S COAT OF MANY COLORS), a scrawny sad little kid with holes in his shirt, who may possibly be illiterate. He goes from drawings with no text when he reads his story, an extremely grim and thinly-veiled autobiography about a young bear and his sick father bear. We can see how it sounds to her, but we know it’s even worse: his dad Frank (Scott Haze, VENOM, MINARI) and little brother Aiden (Sawyer Jones, one episode of Modern Family) had an encounter with the monster and now they’re locked in the attic as veiny, bestial zombie-type creatures. Lucas kills small animals and chops up roadkill to feed them. Alot of responsibility for a kid that age, and he definitely steps up to the plate. END_OF_DOCUMENT_TOKEN_TO_BE_REPLACED 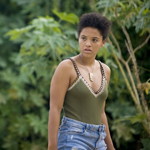 For a bit it seems like some puzzle-oriented video game like Myst, because she’s looking at objects and photos, piecing together a bit of a backstory for characters we never even see. There’s a journal, but it got wet enough that all the ink smeared away. END_OF_DOCUMENT_TOKEN_TO_BE_REPLACED 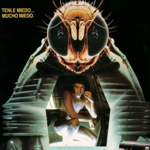 It starts cute with undiscovered genius Seth Brundle (DEATH WISH‘s Jeff Goldblum) awkwardly hitting on magazine reporter Veronica Quaife (THE LONG KISS GOODNIGHT‘s Geena Davis) and somehow getting her back to his lab, which she’s not happy to learn is also his bachelor’s pad. She’s skeptical and probly a little creeped out until he demonstrates what he’s secretly been working on: “telepods,” a set of chambers that can disintegrate matter on one end and reintegrate it on the other. Teleportation. Star Trek shit! He points out that it will revolutionize transportation. In one of the few corny bits in the screenplay by Charles Edward Pogue (PSYCHO III, KULL THE CONQUEROR) we find out Brundle gets car sickness as extra motivation for inventing such a thing.
END_OF_DOCUMENT_TOKEN_TO_BE_REPLACED