In my opinion part 3’s not quite as good as the previous one, but it has plenty of good touches. It’s directed by Anthony Perkins himself (his first time, and the only other thing he directed was the comedy LUCKY STIFF). It starts out with an homage to VERTIGO in a whole Technicolor-looking sequence involving nuns in a bell tower. 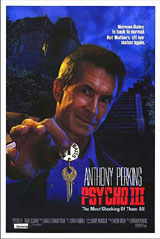 A suicidal nun (Diane Scarwid) who has lost faith in God runs away and eventually finds herself at the Bates Motel. Seeing her short blond hair and the initials “M.C.” on her suitcase, Norman just about has a heart attack when his sleazy new employee/singer/songwriter Duane (Jeff Fahey, later in DARKMAN III) puts her up in cabin 1, where he killed Marion Crane all those years ago. (This is 1986 now but it’s supposed to be 22 years later, a few months after part 2. There aren’t any lines like “have you seen that new movie that just came out called E.T.?” to give it a period feel, but they do say that Marion Crane was 22 years ago.)

Well, you know Norman, so next thing you know he’s looking through the peephole at this poor sister getting naked by the shower and then he’s dressing up in his mother’s clothes and busting in there to stab her… but he finds that she’s in the bathtub with her wrists slit. So that kind of throws him off his game. He had this crossdressing/stabbing-in-shower deal down pretty good because he did it that time before but she throws him a curveball like that and everything changes. I mean even if you believe yourself to be your dead mother (alleged biological this time, long story) how the fuck you gonna murder somebody right after they killed themselves? It just doesn’t work. So he calls time out and brings her to the hospital, saves her life. And in her delirium, she sees him with the wig and the knife, thinks she sees the Virgin Mary holding a silver crucifix.

I don’t know about you guys but I didn’t see any of that coming. The movie peaks early, but that’s okay. Like a nice nun, I forgive it. That’s just an incredible turn of events, so I give great credit to screenwriter Charles Edward Pogue (same guy who wrote Cronenberg’s THE FLY. And, uh, DRAGONHEART. And KULL THE CONQUEROR.)

Part III follows from the twist ending of Part II, which was a great way to end that one but unfortunately sort of sets this one up to be more of a rehash of the first one. Suddenly he has a mummified mother again, giving him orders. So after that great first act it’s not quite as interesting. One of the murders takes place in a phone booth. That seems a little self-conscious, like “Hitchcock made people afraid to go in a shower. What sort of common confined space should we make people afraid of?”

Some interesting things happen. Norman almost falls in love. The motel gets busy during a big football game – wouldn’t it be cool if the movie was mainly just about trying to do a good job running the motel? Hiring a new cleaning staff and training them and stuff? Maybe not. The dead mother gets kidnapped, that was pretty cool. A reporter is investigating Norman because she thinks he killed a local waitress – true, but it’s funny that she doesn’t realize this nice old lady she’s concerned about was the killer in part II. And there are more convoluted secrets to be learned at the end.

There’s alot of dry humor in this one, so it’s enjoyable, but it’s much less excusable than part II. Part II was such a reversal of the original, because you know who he is and root for him to get better. In this one you know he’s gone from the beginning (if you forgot from Part II you’ll notice when you see him poisoning birds so he can practice his taxidermy on them) and he’s going around slashing people. So he seems more like the generic ’80s multiple murderer the studio and marketing people probly would’ve liked him to be at the time.

But it’s not bad. It’s pretty good. I enjoyed it. Perkins is still good (though a little broader), Fahey is a really funny sleazeball character, and the weird nun storyline helps.

I gotta take away points for the very end, though. It seems like kind of a deranged happy ending, because Norman stabs the taxidermied body of his other mother (long story). Oh God, Mother! Sawdust! Sawdust! And they lock him up again for the murders they now know he did, but he’s okay with this because he’s finally free of his mothers.

I mean, that’s a good ending there. Taken away in handcuffs, probly won’t ever get out, and he’s like “Phew, thank God.” Unfortunately then they go too far by showing him in the backseat of the cop car smiling crazily while petting the severed hand that he’s somehow snuck in with him. What, is he a magician now? And they didn’t frisk him? I shouldn’t hit on the phoniness too hard because that’s not the problem, the problem is that it ditches the character arc they had going in favor of a dumb shock.

Other than that though PSYCHO III is a pretty solid part III.

Anthony Perkins Jeff Fahey slashers
This entry was posted on Monday, November 2nd, 2009 at 11:55 am and is filed under Horror, Reviews. You can follow any responses to this entry through the RSS 2.0 feed. You can skip to the end and leave a response. Pinging is currently not allowed.