It’s probly hard to imagine for people who grew up post-internet, but there was a time when you couldn’t just turn on your computer and find the weirdest, most fucked up shit imaginable just as quick as you can type www.theweirdestmostfuckedupshitimaginable.org. Back then people who had strange fetishes or possessed disturbing footage tried to hide that shit, they didn’t think they could proudly put it out there and try to make new friends with it. Finding that stuff took time, effort and connections. These days kids email each other real footage of hostages being beheaded. Back then the FACES OF DEATH guys had to fake a beheading, and even their fake version was more of a legend people heard about then something they’d actually seen. That’s when Dave Cronenberg’s VIDEODROME takes place. And it involves material way more unsettling than FACES OF DEATH. 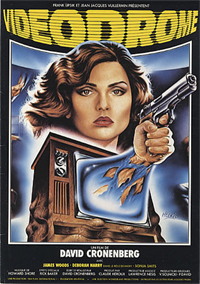 James Woods plays Max Renn, a guy who runs Civic TV, a small Toronto cable channel that plays softcore porn at night. But he’s always looking for something with more bite for what his agent calls “the subterranean market.” One of his connections uses a satellite to intercept broadcasts from around the world and tape them for Max. They find something called “Videodrome” which Max considers to be a “show” but that seems suspiciously like home video of people being tortured by death squads maybe in some South American country somewhere or something. Of course, because it’s Cronenberg it’s gotta have some bizarre dream-like touches, so the people are being tortured in front of a wall of electrified wet clay. (Who thinks up this shit? Well, David Cronenberg.)

Of course it turns into a creepy mystery with him going to the source of Videodrome and unwrapping a conspiracy that involves a church mission for homeless people, an eyeware company, a media figure who’s actually dead but nobody knows it because he pre-taped years worth of TV appearances and monologues, brain tumors and bizarre hallucinations.

You can only imagine what it’s like if you’re familiar with other Cronenberg movies, because nobody else does shit like this to compare it to. It involves elaborate latex effects depicting an intersection between video hardware and human organs. He notices a huge opening on his chest and scratches inside it with his handgun. Somebody hands him a throbbing VHS tape that he puts in his chest and it programs him to be an assassin. His handgun and arm start to grow together like a couple of trees planted too close to each other. Next thing you know he’s running around with a roughly gun-shaped lump of flesh instead of a hand.

Cronenberg really demonastrates how much you can get out of just trying something that hasn’t been on screen before. Stop being literal and plum the nonsensical shit from your subconscious. You keep that hidden because it’s uncomfortable, so if you’re making a horror movie why not use it? Think of all the Freddy sequels with their comic-book-artist-killed-by-Super-Freddy type nightmares, and how much scarier they’d be with Cronenberg’s freaky shit instead. Makes you wish for some reason he’d been asked to do and willing to do that NIGHTMARE remake. He could’ve actually caused some sleep disorders.

At the same time I think this is Cronenberg’s strongest dose of the freaky shit that maintains a balance with normal thriller conventions. It dips further into Mindfuck Valley than SCANNERS does but not all the way like NAKED LUNCH or CRASH. To me that makes it more subversive because it has enough suspense to hook a normal viewer of Ashley Judd serial killer thrillers but still tricks them into seeing a TV screen grow nipples.

And because this is 2010, of course some motherfucker (specifically Ehren Kruger, an individual who willingly put his name on the scripts of SCREAM 3 and TRANSFORMERS 2) is trying to remake even this crazy movie. That would make it one of the very first movies about a guy with a VHS-compatible chest vagina to be repackaged for this generation. I don’t know how you do it in this day and age, but hopefully Channing Tatum or whoever stars will grow a weird new orifice that’s equipped for text messaging. 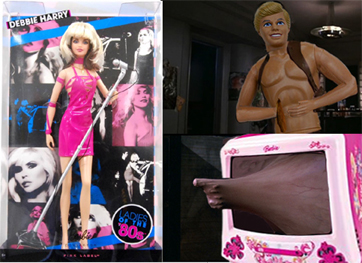 The world has really changed since VIDEODROME came out in ’83. Back then Debbie Harry was very edgy, she’d only been in underground movies like DOWNTOWN 81 with Basquiat, and she’d just done a closed-after-one-night wrestling play with Andy Kaufman. Now she has a Barbie doll. But the themes of the movie are still relevant, they just apply to different technology. And more importantly the tone is still creepy as, uh… as a guy with a lumpy flesh gun on his hand. There is no match for Cronenberg’s filthy Canadian mind. This is not a movie about a series of murders, but its imagery is way more terrifying than any of those types of movies. You don’t even have to understand what’s going on in this one for it to give you the heebie jeebies.

I mean, seriously Cronenberg. You’re the best. And what the fuck is wrong with you? Holy jesus. I love you man, but you need help. But don’t get it. Make more movies.

David Cronenberg Debbie Harry James Woods
This entry was posted on Tuesday, June 8th, 2010 at 1:38 am and is filed under Reviews, Thriller. You can follow any responses to this entry through the RSS 2.0 feed. You can skip to the end and leave a response. Pinging is currently not allowed.