SCANNERS is a story about mutants with psychic powers, a generation of babies messed up by a medicine their mothers took, now grown and finding their brains too powerful, causing them to hear other people’s thoughts, and giving them dangerous powers like they can drop you to the ground with a nose bleed just by thinking about you too hard. If you get a greeting card from a scanner that says “Thinking of you,” take that as a threat. 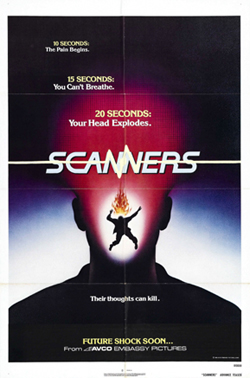 A member of the Scanner-Canadian community faces many hardships, so they tend to become outcasts, not really knowing how to fit in. We follow one of these scanner misfits, Cameron Vale (Stephen Lack), as he scans some old ladies for talking shit about him in a food court, gets spotted and picked up by a private security firm called ConSec, and gets recruited to stop a militant, supposedly crazy scanner (Michael Ironside) who’s trying to band together all of the scanners for an uprising and kill the ones who won’t join up so there’s nobody to stop them.

That plot is pretty similar to X-MEN, and it’s easy to imagine this made today as a slick PG-13 thriller with lots of show-offy CGI and an ending that sets up a trilogy. But in 1981 young Dave Cronenberg made it as a creepy, seedy, low budget, lo-fi creepfest. It has all his early obsessions: video distortion, weird synthesized sounds, horrible and unnatural bodily mutilation, dangerous clandestine organizations, untrustworthy private companies involved in secret programs. It has a very cool thriller concept and enough groundbreaking gore effects to get in the horror magazines, but it doesn’t feel much like a normal genre type of movie. Cronenberg’s movies feel like they’re actually made by a madman. (Except FAST COMPANY, which is just made by a car enthusiast.)

Of course you know about the famous scene early on where Ironside causes another man’s head to (SPOILER) get full of silly ideas (THAT WAS A FAKE OUT SPOILER, HERE IS THE REAL ONE) explode. It’s a classic scene that says, “Despite my polite Canadian demeanor I assure you that I mean business!” There are plenty of other intense scenes like the car crash a scanner causes in order to escape custody, a bunch of shootouts and further scanner-on-scanner brain fights. I like that the bullet hits mean business too, there’s always a serious splatter and it seems like chunks of meat fly off.

But alot of the “action” is really just people staring and other people being affected by that staring. It’s amazing how much mileage Cronenberg gets out of facial expressions, convulsions and Howard Shore’s weird keyboard sounds. It really seems like you can almost see the beams coming out of their heads. It’s incredibly effective for something so simple.

In fact that could be the one thing that protects SCANNERS from getting recycled by the remake factory is that it’s not a power that would be easy to spend millions of dollars on. They’d have to change it to something that can be seen more. They don’t figure anybody wants a movie based on imagination and pretend and implying stuff. The concept does lend itself to all kinds of other stories (that’s why they made a bunch of sequels [also because what’re they gonna do, make up a new movie?]) but you’d have to change it alot to be expensive. Of course, I’m sure they’d add a bunch more exploding heads. But only on the unrated version you didn’t see in theaters DVD.

What is it about that time between about 1978 and 1982 that just lent itself to this kind of dark, grimy mystery? SCANNERS reminds me of THE HOWLING how this guy is out in the city hiding his weird secret. But the serial killer werewolf doesn’t get cleaned up in a tie and trenchcoat and sent to inflitrate werewolf subversives. And also it’s more cerebral. (Well, no shit.) It’s such a good paranoid concept. How are you supposed to outsmart somebody who can read your mind? That’s a tough one.

Late in the movie there’s a part where Vale scans through a pay phone, sending his thoughts through the wires, causing a fire. In context it seems to make alot of sense. If your thoughts can travel through the air into other heads, why not travel through a wire like other forms of information? It made me think of those hackers who can do crazy shit just using a phone, except this is the Cronenberg version of that so it’s biological.

SCANNERS is a real good example of a crazy artistic mind allowing itself to be just barely constrained by the rules of exploitation. I like that kind of stuff. Definitely check it out if you haven’t seen it. I mean, you can just tell by that little picture above that alot of crazy shit happens in this movie. But don’t tell the Hollywood people about it. I don’t mean to spend too much of the review worried about the remake potential, but it just seems so obvious that it could happen. So I would like to point out that the lead looks alot like Scott Adkins. Instead of remaking it I hope they consider just re-releasing it as a special edition with some new judo scenes.

David Cronenberg Michael Ironside
This entry was posted on Thursday, June 3rd, 2010 at 10:28 am and is filed under Horror, Reviews, Thriller. You can follow any responses to this entry through the RSS 2.0 feed. You can leave a response, or trackback from your own site.