Okay, my last two reviews brought out everybody’s expertise of mixed martial arts competitions and professional wrestling. Let’s see how you guys do with this sport.

RANK is another John Hyams documentary in the tradition of THE SMASHING MACHINE, but this one’s in the world of professional bullriding. In both sports Hyams has documented so far, the athletes break parts of themselves that they aren’t gonna be able to fix. And the filmatistic approach he used in SMASHING MACHINE ain’t broke so he doesn’t fix that either: it’s almost-direct cinema (just following people around, but they do talk to the camera sometimes), hypnotic score, themes that make themselves apparent and don’t need to be underlined. This time around it looks like he got better cameras, though. The cinematography is outstanding. 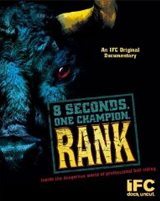 Hyams follows the finalists in the 2004 Professional Bull Riders World Championship, a 7-day event in Las Vegas. He also follows a bull trainer hoping to become Livestock Trader of the Year. We meet these people on their ranches and with their families and then we see them transported to this stadium in the middle of Las Vegas. There’s a great montage of traditional Vegas sights underlayed with country guitar as the rodeo fans all shuffle in in the daylight.

This is gonna sound outrageous, but I never gave bullriding much thought before. It just never came up, you know? RANK does a good job of explaining how it works, and of leaving you trying to figure out why they do it. They gotta hold onto the bull and have one hand in the air for 8 seconds, or they get no points. If they make it they’re judged half on their riding and half on the bull’s bucking. There doesn’t seem to be much art to it, and more balls and grit than skills.

The injuries these people sustain make MMA look like some girls having a tickle fight. As the days of the competition go on they get more and more beat to shit, hobbling around, showing off their misplaced bones and giant yellow bruises. One guy laughingly reveals that he’s had a giant blood blister covering one entire side of his ass and legs for days. Another guy talks about the time he got gored but luckily it didn’t hit any organs or infect him.

Then they reveal that you’re allowed to wear a helmet and protective vest, but most of these guys are too stubborn to, too traditional. I mean, what is the fun in risking getting stomped to death if your skull and brain are partially protected? It just wouldn’t have the same magic.

You think that’s rough? What about the bullfighters? They’re there to attract the bull’s attention away from the rider when he falls off. They get butted through the air, sometimes gored or stepped on. They used to dress as clowns, but now they’re treated as athletes and wear vests with corporate logos on them like NASCAR.

The big question you have to wonder about while watching this is what the hell inspires people to do this? As a city guy I figured well, if you’re raised around cattle it probly seems more sane. But one guy’s father says people accused him of abusing his son because he had him riding broncos or something as a kid. We also see a tiny little kid doing just that, taming wild horses, keeping them under control, and it’s a freakish sight. How is this kid gonna collect all the pokeymans when he’s spending all his afternoons wrestling the beast out of wild animals?

This one guy, I think his name was Justin, but he’s a real interesting character. He seems really nice, is very religious, also you gotta worry just looking at him. He’s young and boyish, but has a big line in his hair where his head was split open one time. And the rhythm of his speech seems just a tiny bit off. He’s got a wife in the crowd, and another guy has his wife and young kids, and it doesn’t look like it’s fun for them to watch. There’s a great shot near the end of the winner embracing his wife as everybody celebrates his victory, but to me her face looks less like “He did it! He’s the world champion!” than like “We just survived a plane crash – I need some sleep.” I mean, it’s more like the end of THE PIANIST than ROCKY II.

These guys are shown to be very nice, with nothing but professional respect for each other, and in some cases they are very selfless and good friends. But there’s an aspect to them that is questionable. My favorite scene has Justin I believe visiting with his mom. She talks proudly about his accomplishments and how he’s like his father, who died riding a bull right before he was born. But as she’s talking about watching her son she starts to cry. And you gotta wonder how moral it is to put your loved ones through that. That’s a question explicitly asked in Eric Bana’s racing documentary LOVE THE BEAST and the wrestling documentary BEYOND THE MAT, and it’s implicit in THE SMASHING MACHINE. But of all those sports this seems the most questionable to me. The fighters and wrestlers put on these long performances, they’re hurt but almost never die in the ring. The drivers construct their cars for safety. But these guys risk death for 8 seconds or less of pissing off cattle. We know a guy was killed last season. A guy from the PBR says he can try to talk people out of riding with injuries, but he can’t stop them if they want to do it. And that’s basically what the contest seems to be about. It’s 50% grip and 50% surviving heinous injuries.

That drive, that illogical obsession, is what makes a documentary like this great. It makes you wish you had something you loved so much you were willing to maim yourself for it. And also it makes you glad you don’t.

bull riding John Hyams
This entry was posted on Wednesday, March 3rd, 2010 at 3:12 pm and is filed under Documentary, Reviews, Sport. You can follow any responses to this entry through the RSS 2.0 feed. You can skip to the end and leave a response. Pinging is currently not allowed.