THE SMASHING MACHINE is a documentary about Mark Kerr, at the time an undefeated fighter in UFC, Pride and other mixed martial arts competitions. The director is John Hyams, whose UNIVERSAL SOLDIER: REGENERATION was so unexpectedly great I felt compelled to watch everything else he’s directed. In fact, Van Damme’s admiration of this movie is apparently what got Hyams the gig on the ol’ UNISOL.

The opening got me right away because it’s a voiceover on top of fight footage, and something seems wrong. The gentle, almost nerdy voice that’s talking to us doesn’t seem to match this muscleman we’re watching use his bare hands and feet to take flesh that God shaped in His own image and reconfigure it into an ugly pile of of bruise and injury. If Mark Kerr called you on the phone and said, “I’m the Smashing Machine,” you’d hear his voice and you’d never believe him. You’d hang up. But it’s true, he’s the Smashing Machine. And also a nice, thoughtful guy. 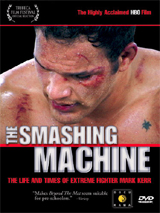 The problem, the movie shows, is a lack of focus. He has two major distractions.

2. Drugs. Man, this guy is really addicted to painkillers. He makes THE WRESTLER look like a lightweight. You should see how many syringes and pill bottles he has laying around. When he decides to quit and gathers up all the shit he has it fills up a whole grocery bag.

The movie is perfectly crafted to put you into the mentality of a fighter. This is sort of the idea I got from the movie: in the beginning, men fought. Then they found out about women and chemicals. That made them not as good.

The people who are the best are the ones completely dedicating their lives to fighting. You watch this movie and every time Dawn shows up you think “Uh oh, he’s gonna blow it.” At one point he’s broken up with her and things seem to be going well. Then all the sudden he’s in training and she’s there, all gussied up too like she’s trying to lure him. (Same way Bugs Bunny defeated some of his foes.) They reveal her presence a piece at a time – first a shot of her high heel, then a piece of her short skirt. It’s like she’s the shark in JAWS.

This is my favorite type of documentary, the verite or direct cinema style, fly on the wall – but assuming that this particular fly that’s on the wall is a great storyteller. This is the same instincts that made UNIVERSAL SOLDIER: REGENERATION, the ones that don’t try to spell everything out for you. And they’re very good at leaving things unsaid until they’re important, then give you just enough information when it’s needed.

The story of Mark Kerr at this time is the story of a guy who loses his discipline, loses his edge, but at least got sober. Otherwise he’d be dead. But the story of THE SMASHING MACHINE is the story of Kerr and his buddy Mark Coleman, a fighter who seems to have given up on his dream so he can help others who still have a shot. But then while Kerr is in rehab Coleman stages a huge comeback. It ends cutting between the two guys after a big tournament, a contrast of highs and lows. Some people get to the top of the world, some just lay there and cry. Everybody gets beat up.

I have to admit that I groaned when the end told me Mark and Dawn later got married. These events leave you believing in a strict kicks-before-chicks credo. She seemed like a bad influence who got him drinking beer when he should’ve been totally clean and had to always cause drama at the exact times that it would fuck him over. After he loses the first match of his career she says she knew he would, because he wasn’t training that hard, and the other night they went out partying. As if she couldn’t have said anything at the time. I mean obviously it’s his fault, but what kind of a girlfriend doesn’t say anything when you’re flushing your dreams down the toilet?

The movie made me hate her, but that’s from the POV of wanting to see him be this perfect warrior. From the perspective of a human being though maybe family is more important than smashing. I hope they both sobered up and were good for each other. On a commentary track the director and producer both say that Dawn is actually a nice person and that they kept wishing Mark would quit fighting for his own good. So maybe it’s better in the long run.

Anyway, Coleman has a wife and two daughters, he still has the edge. So you don’t necessarily have to be a monk.

If you rent it be sure to also check out Hyams’ 35-minute short documentary FIGHT DAY, which is one of the special features. Seemingly made out of outtakes from SMASHING MACHINE, FIGHT DAY follows Renzo Gracie of the famous Gracie Brazilian Jui-Jitsu empire through the course of a day when he has a big fight. My favorite part is how it shows a big event from the perspective of a guy waiting backstage. You see all these incredible fighters warming up, preparing themselves mentally, going out to fight. But it stays with Gracie and doesn’t show what happened in their fights. Suddenly, they reappear with puffy faces, covered in blood and cuts, some of them not happy about what has happened. He looks at them and then looks away, trying to stay focused.

THE SMASHING MACHINE is a great documentary. I watched it a few days after first seeing REGENERATION, and it’s really stuck with me in the weeks since then. Whether he’s doing a documentary or the fourth sequel to a Roland Emmerich movie, Hyams has an eye for what’s interesting and how to mold it into the best story. This guy is no joke. I hope he has more in the works.

Bas Rutten John Hyams Mark Coleman Mark Kerr MMA
This entry was posted on Tuesday, March 2nd, 2010 at 2:34 am and is filed under Documentary, Reviews, Sport. You can follow any responses to this entry through the RSS 2.0 feed. You can skip to the end and leave a response. Pinging is currently not allowed.

27 Responses to “The Smashing Machine”