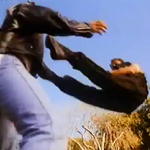 He has an older guy he calls his best friend named Sam (Harrison Young, Ryan as an old man in SAVING PRIVATE RYAN), who I think runs a garage and kind of seems like he could be the landlord like the guy in ROAD HOUSE? He’s involved in a great bit of b-movie flavor when he’s doing a crossword puzzle, asking for a word for “something that haunts.” Griffin suggests ‘ghost,’ but Sam says it has to be four letters, and just then a scary dude named Adachi (Keo Woolford, “Airport Worker,” GODZILLA) steps in looking for Griffin, who dramatically declares that “The Griffin you knew… is dead.” END_OF_DOCUMENT_TOKEN_TO_BE_REPLACED

The same cannot be said for David Percival (James McAvoy, THE POOL), the goofy, shifty contact who shows her around but might be the Russian double agent known as Satchel. END_OF_DOCUMENT_TOKEN_TO_BE_REPLACED