But Fonny is, as Tish puts it, “behind glass” when she brings him news that they’re going to have a baby. And not for the last time we will hear firm, assurances that things will be okay, people will stick together, odds will be overcome.

My favorite part of the movie is the next long stretch, like a one act play unto itself, where Tish goes home to tell her family she’s pregnant and they call over Fonny’s to tell them too. So much tension and humor about their differing reactions and the obvious dislike between the families. Imagine having Regina King (BOYZ N THE HOOD) as your mom! As Sharon she leans more Huey Freeman than Riley, and is a warm presence of strength and righteousness, here to support her daughter, future son-in-law and grandson-or-daughter in any way she can. And I immediately loved Tish’s dad Joe (Colman Domingo, Ralph Abernathy in SELMA, also in RED HOOK SUMMER), the jocular peacemaker. He uses his knack for male bonding to get Fonny’s dad Frank (Michael Beach, Black Manta’s dad in AQUAMAN) on board with Operation Support Our Grand Child. Frank makes us like him by being a check on his wife (Aunjanue Ellis, GAME OF DEATH, GET ON UP)’s judgmental qualities, but then does something that makes us gasp and wince. Also of note: Tish’s sister Ernestine (Teyonah Parris, Lysistrata from CHI-RAQ), who will prove to be very good at making colorful threats. You’ll see.

Another great part that kind of stands as its own little story is a flashback about Fonny randomly running into an old friend and inviting him over to the apartment to catch up. And the friend is played by Brian Tyree Henry, who I love mostly from Atlanta but also from WIDOWS and SPIDER-MAN: INTO THE SPIDER-VERSE and I’m gonna have to see HOTEL ARTEMIS and WHITE BOY RICK and he’s gonna be in the remake of CHILD’S PLAY and GODZILLA VS. KING KONG and eventually there’s gonna be a movie that he’s not in and we’re all gonna be like “what the fuck were they thinking not having Brian Tyree Henry in it?” Here he uses his great charisma powers and they laugh and pat each other on the shoulder and slowly make their way to talking about some real shit. 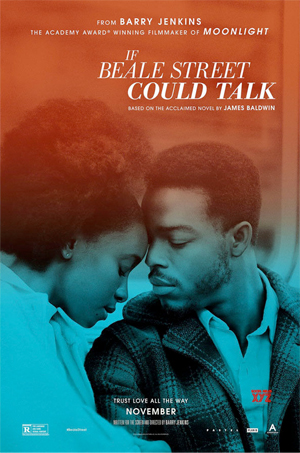 Jenkins adapted this one from James Baldwin’s fifth (and next-to-last) novel, published in 1974. The title comes from a lyric in the song “Beale Street Blues,” about the Memphis street that was a legendary hotbed of blues and jazz (and also, I discovered on my second visit, the location of King Jerry Lawler’s Hall of Fame Bar & Grille). A Baldwin quote that opens the film indicates that he was referring to a Beale Street in New Orleans where his father was born. Although nobody seems to be sure which specific street he was talking about, he uses it as a metaphor for every black neighborhood in the country. I wish I could say I was knowledgeable about his prose – that would be a lie, but they seem to come through in Tish’s narration and in the dialogue that occasionally uses terms that are either stylized or archaic, but always have a good sound to them.

These are really rich characters – lovable, not perfect, not always getting along, but instinctively pulling for each other. Like family. And it’s frustrating to see people who feel like your family stuck in this mess where – barring some thriller type twist that, I’ll go ahead and tell you, is not forthcoming – seems to be quite clearly innocent. But even if it’s an easy case, just clearing it up costs money they don’t have, and takes time. So this kid comes into the world already a couple spaces behind on the Monopoly board because his early years are spent separate from his dad and minus the money spent on the case or that would’ve been earned by his dad. The biggest irony is that Tish and Fonny’s dads end up committing real crime to pay the lawyer (Finn Wittrock, NOAH) to prove Fonny didn’t commit a crime.

There’s a brief but important appearance of a racist cop (Ed Skrein, THE TRANSPORTER REFUELED). I’m impressed by his transformation, because I didn’t recognize him at all, but the way he struts in looking like some junkie low level mob weasel, ready to just start doing the racism, is the one thing about the movie I didn’t like. I mean I absolutely believe there are cops who would do what he does, but oozing sleaze like some character out of VICE SQUAD feels less true than the movie surrounding him. Could use more subtlety. But it’s a small thing.

I’ve heard of people dreading this one, under the assumption that it’s gonna be depressing. I think that comes out of a history of black American cinema and cinema about black America that focuses on misery and tragedy. And I think that comes partly out of a feeling of responsibility to the community, to keeping it real, to not wasting their platform. But I think this is very different from what those hesitant could-be-viewers might be picturing. It does address important and still relevant societal issues, but the emphasis is not on pain, victimhood or even injustice – it’s on the beauty of the people who must go on living despite those things. They support and inspire each other and they go out of their way – out of the country, even – to try to fix what’s wrong, but if that doesn’t work they will not be defeated or defined by it. So it’s sad, but it’s optimistic, and it’s strong. It says this is fucked up and I am outraged, but life is still full of love, and sex, and bottles of wine to share with friends, and pain that turns into laughter, and the sumptuous beauty of faces and polyester shirts and Harlem and soul music and movies like this that look and sound and feel so perfect they’re intoxicating. 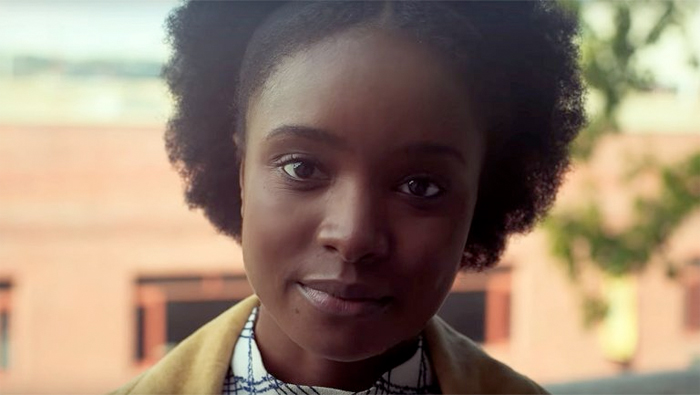 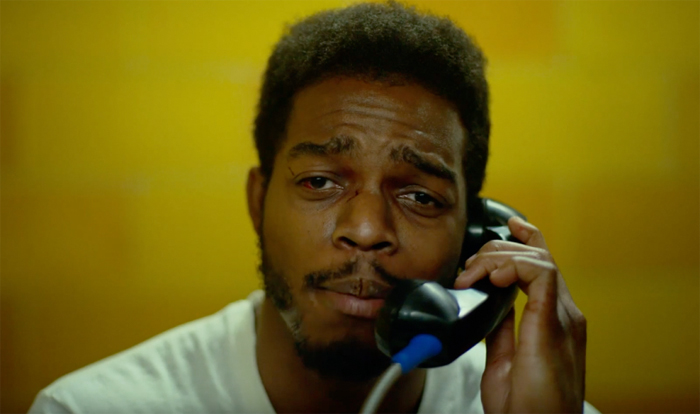 Aunjanue Ellis Barry Jenkins Brian Tyree Henry Colman Domingo Dave Franco Ed Skrein Finn Wittrock Harlem James Baldwin KiKi Layne Michael Beach Regina King Stephan James Teyonah Parris
This entry was posted on Monday, January 14th, 2019 at 12:10 pm and is filed under Drama, Reviews. You can follow any responses to this entry through the RSS 2.0 feed. You can skip to the end and leave a response. Pinging is currently not allowed.

5 Responses to “If Beale Street Could Talk”