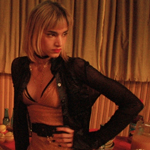 Here’s my pitch: STEP UP 3 meets mother! on acid. Literally on acid – it’s about a French dance troupe having a party in an empty school building and realizing somebody dosed the sangria. Everybody gradually goes from joyfully celebrating their progress on a new routine to getting paranoid, agitated and violent. The few who didn’t drink it are suspected of spiking it, and become targets for the others. Everybody is trying to fuck everybody else while also trying not to be fucked by everybody else. It turns into a dark, horny fever dream where the rooms keeping getting darker and redder and the camera more disorienting, eventually even upside down (shout out to the massage parlor robbery scene in TOO MANY WAYS TO BE NO. 1). I noticed that there was a whole lot of screaming and wigging out, but actually didn’t catch that 42 minutes of it was one unbroken take.

It’s a grueling experience in dance party terror, it’s provocative in a pretty adolescent way, and it seems like it should be sponsored by the D.A.R.E. program, so I fully understand anybody hating this one. But I don’t know – I kinda dug it. It’s got lots of fun dancing, a catchy beat (until it completely goes to Hell), a cast of hot exotic French dancers, and my favorite mummy Sofia Boutella (KINGSMAN: THE SECRET SERVICE, STAR TREK BEYOND, ATOMIC BLONDE) in a challenging role where she has to improvise, dance, do the splits up against a wall, and have a long, intense freakout where she seems to think her nylons are devouring her. Also it’s only 96 minutes long so it’s not that torturous. 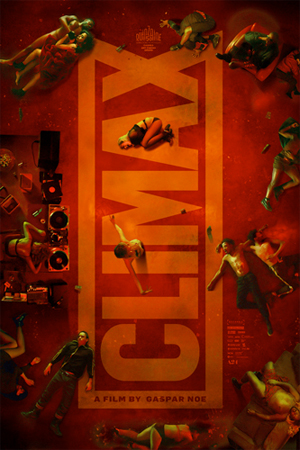 I didn’t realize that Boutella started as a dancer – she was in videos for Madonna, Jamiroquai and others, and starred in the British dance movie STREETDANCE 2 right before MONSTERS: DARK CONTINENT broke her into the secular world. Souheila Yacoub, whose character Lou is in the midst of a pregnancy scare, is also a dancer who has done some acting (in an episode of the French tv series Plus belle la vie). Everyone else in the 24-member ensemble is a dancer with no acting experience, so I wasn’t surprised to learn that they were given a basic scenario and character traits but no script, and worked together to improvise the whole story in chronological order, shooting for only 15 days. All the characters have little subplots going, which were worked out based on what the dancers thought would be interesting.

I like the playfulness of the filmatism, alternating between elaborate technical show-offery and intentional basic-ness. Like, the standout scene is definitely the 5 minute dance number, done in a single take that continues for another 7 minutes after the dancing stops. But then there’s a long section just of the characters paired off having conversations about sex, with straight on shots and edits like somebody’s homemade VHS epic.

There’s only the one choreographed number, but it’s also fun that we get to see these advanced dancers during a party, and there’s a long sequence with a bird’s eye view as they take turns in the middle of the circle. And as everything devolves many of them can be spotted doing weird moves and contortions, off in their own dimension in a corner as the camera roams the different rooms and halls cataloging the various screams of agony coming from all around.

The most upsetting part is when one lady’s little son Tito (Vince Galliot Cumant) sneaks some of the sangria. She locks him in a room where he cries about hallucinated roaches while being reassured “It’s a party. There’s balloons and surprises,” from the other side of the door.

But Noe’s provocation starts long before the bad trip. After a brief prologue he’s got basically the same as the opening shot of US: a TV screen filling the middle of the screen, a stack of movies next to it that must’ve been influences on the movie or something. I know SUSPIRIA and POSSESSION were there. The left side is books, but I didn’t see Seagalogy, so who gives a shit what they were? Obviously nobody.

Anyway the TV is showing interviews of the different dancers who will be in the movie. All the different characters. Talking about dancing and their lives, setting everything up. Every one of them. Going back and forth between all of them. It just keeps going. From neat little gimmick to okay I get it to I think he might be fucking with us, cutting about half a second before is this just gonna be the whole thing?

And he’s got the end credits at the beginning and then in the middle there are more credits, with logos for the production companies and the bands on the soundtracks, a little too big and flashing a little too fast.

The dancer interviews reminded me of the “Born From a Boombox” documentary clips at the beginning of STEP UP 3, and the dance sequence reminded me of that movie too, in particular my favorite dance battle, The Battle of Red Hook. Some of the moves are similar, and they move toward the camera in a similar way – I assumed it was shot in 3D like Noe’s last movie LOVE, but it turns out they’re just using that style because it’s cool.

If you’re among the many people who hated CLIMAX but liked that dance scene – or also if you are not among those people – I seriously do recommend STEP UP 3. It lacks the cool gimmick of the unbroken take, but otherwise it’s more elaborate and stylish in its dancing, it has way more of it, and it’s a movie full of charm instead of misery. It’s even better if you watch part 2 first, but you’ll be able to figure out the plot either way.

Anyway I would definitely watch CLIMAX 2 THE STREETS.

And I can’t believe I never knew this before, but there’s an official video for the posthumously released Michael Jackson song “Hollywood Tonight” that stars Boutella.

dancing Gaspar Noe Sofia Boutella Soheila Yacoub
This entry was posted on Wednesday, June 26th, 2019 at 10:08 am and is filed under I don't know, Reviews. You can follow any responses to this entry through the RSS 2.0 feed. You can skip to the end and leave a response. Pinging is currently not allowed.