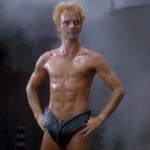 Make no mistake about it, it’s hard out here for a Spartan. Alot of these bastards, they’re “baptized in the fire of combat.” They grow up having to fight their dad all day, and I mean really fight him. You thought your dad pushed you too hard at hoops, well at least he didn’t beat on you until you fucked up. These guys, the beating is the actual practice. It’s their culture.

In some of the other neighborhoods, like Arcadia for example, you can grow up to be a potter, a sculptor or a blacksmith. In Sparta, you’re a soldier. But you don’t even get to talk about it, like “What do you do for a living?” “Oh, I’m a soldier. I’m baptized in the fire of combat.” In Sparta, they ask you what your trade is you gotta yell out “WHOO WHOO!” or something. You are highly trained in combat and in grunting.

Basically, you’re trained your whole life to fight, and you learn that the best thing in the world is to die “a beautiful death” in battle. If it’s not that great of a battle then forget it, it has to be a really good battle, and then if you die, that’s awesome. No mention of 72 virgins, or the afterlife at all, unless “Tonight we dine in Hell!” is meant literally, which is debatable.

But then after all that training they might not even let you fight. First of all, you have to have a son. Not just a bun in the oven either, it has to be a born son to carry on your name. Bloodlines are a big deal to these people. And then there are body image issues to deal with. There are some serious pecs and six packs on these Spartans. I don’t know if shirts were invented yet or not, but they don’t wear shirts. You can imagine that if you didn’t have pecs like that you would feel pretty fuckin worthless. You’d look like a freak.

Even worse, what if you literally are a freak. Like this one guy, I forget what they call him, but he is Walt Disney’s Hunchy, from the movie Walt Disney’s The Hunchback of Notre Dame. The guy looks like the Toxic Avenger after he broke his spine in a car accident, and he’s trying to fit in with all these fuckin Adonises. He’s a Spartan, so obviously he’s trained his whole life and he can fight like nobody’s business, but because of his birth defects he can’t raise his shield to the proper phalanx height, so they won’t let him help. It’s like those guys that wanted to help out in WWII but they got rejected because of their eye sight or something. Except this guy can’t get laid either. And because of their whole macho culture he thinks he has to redeem his father by killing. Everything in Sparta is about killing. He can’t open up a hospital and name it after his father, that wouldn’t do it.

I really wondered during the movie what exactly these Spartans do when they’re not fighting. If it’s not a war, it’s training the kids for war. Okay, so there’s some sex, but it’s “I’m about to leave for war” sex. They definitely got some great warriors in this joint but I bet there’s not shit to do during peace time. You can’t even climb a tree because there’s dead bodies nailed to it.

For women, I don’t know, it might not be as bad. They have to stay at home and they have to worry about their husbands and sons dying, but they are given more human rights than in some of the other cultures. A Persian messenger is offended when the Queen speaks to him. More importantly, King Leonidas looks at the Queen and waits for an approving nod before he sets off a war by killing the sexist bastard. There is still room for advancement but at least there’s a little bit of power there, like Hilary Clinton when she tried to get us health care.

One thing that definitely sucks about being a woman in Sparta: it’s too god damn cold. You can tell because their nipples are always rock hard.

And the worst thing for both sexes: having to hear about Sparta and Spartans all the fucking time. We are Sparta! Spartans, prepare to fight! In Sparta we do this, in Sparta we don’t do that. Spartans are like this, white people are like that. Sparta Sparta Sparta Sparta. They NEVER fucking shut up. Half these guys, it’s like they don’t even have names, the King calls them “Spartan.” Not even an occasional “buddy” or “pal” or “chief,” everybody is a nationality. “Hey Arcadian,” or “Hey Persian.” I mean, I have a name, dude. I guess it’s good that Sparta means so much to the king, but jesus. ANYTHING you talk about that much, you’re gonna get on somebody’s nerves. Get a hobby, dude.

I also get a sense there’s some bigotry going on here. I mean obviously King Xerxes and the Persians really are planning to enslave Sparta, so the Spartans have every right to fight back. But why does the first guy they kill, and the most joyfully evil guy they encounter, gotta be the only two African-Persians they ever run into? This one dark skinned guy cackles satanically and then his whole face digitally turns ink black except for his eyes. And I’m sure it’s an homage to the drawings in the comic strip this is based on, but jesus.

I bet they’re pretty progressive about gays, though. True, some nationality or other gets called a bunch of “boy lovers,” and I’m sure it bugs some of these guys that Xerxes has fruity looking painted on eyebrows. But I think most would agree that this movie would make a good double feature with DREAMGIRLS.

It also reminded me a little bit of APOCALYPTO. It has less pretense of being actual history (even though it’s based on an actual battle) because it’s more stylized and has a couple monsters in it. But it’s another macho, balls-to-the-wall action movie. And just like in APOCALYPTO, the invading army are a bunch of assholes sporting more bling than Bishop Don Magic Juan. How do they go to the bathroom with all that shit on?

Another one this reminded me of was the first CONAN movie. Because it’s macho as hell, it’s a good simple story about brawn and not so much brain, and it takes place somewhere between the real world and fantasyland. The people who look like monsters are supposed to be inbreds, and there’s no dragons or talking birds or nothing. Only seagulls that snack on dead bodies.

Walking out of the movie I heard some guys saying there was no story, it was just fighting. I don’t think they meant this as a bad thing. But they’re wrong. This is actually a very old and very good story, the story of the 300 Spartans and 6,700 of their close friends who thought it was a good idea to fight hundreds of thousands of invading Persians. It’s a story, but it’s a story freebased to its purest elements. These guys are fighters, they fight. They got a good strategy. They got a simple philosophy. And they kill some motherfuckers, actually alot of them. Some of the battle sequences are pretty impressive, there are some long, elaborate slow motion shots where Leonidas runs through a crowd chopping up who knows how many Persian motherfucks in a row.

According to my sources, 300 is based on a comic strip by Frank Miller, same guy who did SIN CITY. The comic strip is inspired by the movie 300 SPARTANS which is based on the actual historical events of the battle of whatsisdick in 480 BC. I don’t know much about any of these things so I consulted my Nerd Issues Correspondent. He hasn’t read the comic strip (he doesn’t like stories where capes are worn in a legitimate historical context) but he says this is a landmark comic book movie because it’s the first one to credit a colorist (Lynn Varley) for creating the source material. Man, that’s progress. I wish Dr. King was here.

Anyway, my guy hasn’t read it but he heard the movie exactly captured the artwork from the strip, like SIN CITY. If so I think they did a better job of making it seem like a real movie than SIN CITY. This whole movie is stylized, right down to the blood sprays that are animated to look like ink splattered on a page. But it has more depth to it, it looks more like a real world that these people actually live in. Even if it’s really a blue screen. They got some more DICK TRACY makeup in this one but it’s not the main characters, the main characters are real people.

And I have to give credit to this Gerard Butler, who plays Leonidas. He’s not like a Daniel Craig or somebody who’s gonna conquer the world with his charisma. But he’s convincing as the baddest motherfucker of the 400 BCs, the guy you’d follow on a suicide mission. And with that pointy beard he sure looks alot like crazy fuckin Mel Gibson. (Prediction: Gerard Butler in MAD MAX 4.)

I liked this movie. I’m not gonna say I loved it, but it was very enjoyable. These days you don’t see this tone too often – it’s an action movie that’s dead serious, not a bunch of wisecracking, but it’s not at all pretentious. It’s not trying to trick you into thinking it’s more than just a bunch of patriotic musclemen throwing spears and trying not to get hit by arrows. There are numerous great badass moments, including when the Spartans build a wall out of dead people, and when they bury some suckers under the wall of dead people. There’s some good tough talking too, and at least some of it is taken from the accepted historical accounts of the event. When the Persians tell the Spartans to hand over their weapons and Leonidas says to “Come and get ’em,” it’s not an action movie cliche, that’s supposedly what he said.

To me it’s kind of like GLADIATOR except nicer to look at, with battles where you can follow what’s going on, and it’s shorter and less pretentious so I had more fun and didn’t feel insulted by it.

The director is Zack Snyder, his second movie after the surprisingly good DAWN OF THE DEAD remake. So we know now that wasn’t a fluke, this is a guy who can make a fun and cool looking movie with some good violence for the whole family. (“ARE YOU ENTERTAINED?”) The question now is if he has a brain in his head, or if he’s just working on some really good filmatic reflexes. First he took probaly the most thoughtful of all the modern horror classics and remade it as a movie about nothing. Now he makes a movie that non-judgmentally tells about a society of nationalistic killing machines. I’d say he’s definitely a good director but can we call him an interesting director before we know if the guy ever, like, thought about stuff before? I’m not sure, but if the next one is empty too I’m gonna have some suspicions. You can’t eat cotton candy for every meal of the day. But for breakfast and lunch, I guess that’ll be okay.

Zack Snyder
This entry was posted on Saturday, March 10th, 2007 at 4:19 pm and is filed under Action, Comic strips/Super heroes, Reviews, War. You can follow any responses to this entry through the RSS 2.0 feed. You can leave a response, or trackback from your own site.