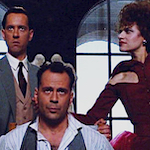 I reviewed HUDSON HAWK 11 years ago, and I stand by that review. There are many things about the movie that don’t work, but none of them overshadow how much it makes me laugh or how much I enjoy seeing, as the quote above puts it, “a rhinoceros with a giraffe’s head on it.” So read that review if you’d like to hear more detail, including my theory about its flop status being partly caused by Eddie “Hudson” Hawk being in many ways the opposite of John McClane. But this is so much the type of movie I love to look at in a summer retrospective – an attempted blockbuster, using star power and production value to try to draw normal people into something kinda weird – that I felt I should rewatch it and add further thoughts in the context of the other 1991 releases. END_OF_DOCUMENT_TOKEN_TO_BE_REPLACED 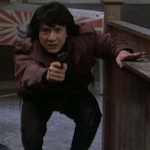 And yeah, it makes sense. Chuck Norris and Jackie were both martial arts stars – in fact, guys who had early roles in Bruce Lee movies – who were now expanding their portfolios in the medium of post-DIRTY HARRY American cop movies. CODE is set in director Andrew Davis’s textured and gritty Chicago, but director James Glickenhaus begins THE PROTECTOR in a preposterously exaggerated b-movie vision of the South Bronx where crime is so bad it has literally become a post-apocalypse movie. END_OF_DOCUMENT_TOKEN_TO_BE_REPLACED 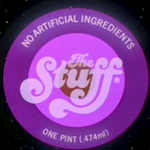 “The Stuff” is the name a marketing firm comes up with for a white foam that an old man finds bubbling out of the ground. People like to joke about the guy in THE BLOB poking the meteorite with a stick, but this guy goes swiftly from “what is this weird substance?” to “hmm, let me taste it.” And it’s so delicious it just turns into snack time for him. END_OF_DOCUMENT_TOKEN_TO_BE_REPLACED I say this because I feel that Spike Lee doesn’t get enough credit as a pioneering and original voice in American cinema. You only see him in the news when he says something stupid, getting mad at Clint for not having enough brothers in his WWII movie or something. I think The Ain’t It Cool News has a social responsibility to mention his name every once in a while just to create the talkback that can remind us how many mush brained racist idiots still exist in the modern world. But there’s not enough discussion of his body of work, his unique style, his influence, his ahead-of-his-timeness. So what if he has a big mouth, if he has a vision to match? END_OF_DOCUMENT_TOKEN_TO_BE_REPLACED

I never used to understand the hatred for THE BIG BRAWL – that’s the first Chan movie I remember seeing, so I thought it was great. He has a bunch of goofy fights, is involved in a huge rollerskate race, does gymnastics on some high up metal bars just to show off, END_OF_DOCUMENT_TOKEN_TO_BE_REPLACED

The year was 1994 and American crime movies were having sort of a resurgence. Young men with movie cameras were reading the Psalms of John Woo and rediscovering the joys of onscreen bullet discharge. It was the year of KILLING ZOE, THE LAST SEDUCTION, FRESH, the Alec Baldwin version of THE GETAWAY and of course DEATH WISH V: THE FACE OF DEATH.
END_OF_DOCUMENT_TOKEN_TO_BE_REPLACED

I’ll start by laying out the three basic schools of thought about why HUDSON HAWK crashed and burned. END_OF_DOCUMENT_TOKEN_TO_BE_REPLACED