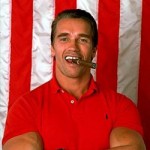 (note: Marcel from Brooklyn points out that Wayne did get an Oscar for TRUE GRIT. So I guess RAW DEAL is supposed to be Schwarzenegger’s TRUE GRIT or something. I haven’t looked up if he got an Oscar for it or not.)

The introduction of Schwarzenegger’s character is a classic: he’s in a Jeep in the middle of a high speed chase with a motorcycle cop. He’s chasing the cop. How often do you see somebody chasing a cop? It’s beautiful! Of course it turns out that Schwarzenegger is a small town sheriff and he’s chasing a guy who’s impersonating an officer, but that’s okay. It was clever to start off with that so you don’t know what’s going on. And it’s a good chase.

We learn that Arnold’s character Kaminsky was a New York cop who got busted for beating the hell out of a child rapist or somebody, so he had to leave town and was lucky to get this job. But his wife hates small town life, it’s driving her so nuts that when he comes home from work she’s baking a cake that says “SHIT” on it and throws it at him.

But one of his old pals had a son who was killed in that shootout in the opening scene so he offers Kaminsky reinstatement if he does a secret off the books undercover black ops psych out ninja black magic eastern promisekeeper death wish revenge mission (i.e. fakes his death, slicks his hair back, creates a new identity as a mobster, becomes a big time mob enforcer, and busts them from the inside). And why not? He doesn’t like shit cake.

I have to admit I kind of took Schwarzenegger for granted for a while, and then when he became a politician I lost respect for him and started thinking less of his movies. But it’s not really fair. The truth is other than his comedies and being a Republican and fucking over Lou Ferrigno in PUMPING IRON most of his choices have been good. You might argue he got lucky being THE TERMINATOR, but then there’s CONAN THE BARBARIAN. And TOTAL RECALL. And PREDATOR. And in his early days he did some good ones too. COMMANDO is a great example of the sillier style of ’80s action movie. RAW DEAL is not as consistently entertaining but it is a fun one. I recommend it.

I always enjoy Schwarzenegger playing a regular guy. Nobody seems surprised that a gigantic muscleman with a thick European accent is a smalltown sheriff. His lumberjack shirt makes him fit in. You’d think anybody who met him would remember him, but he’s still able to go undercover. Hmmm… This European muscleman really reminds me of that cop who beat a child rapist to death five years ago. But no, I read in the newspaper that that guy died in a fiery explosion yesterday. Plus, they have different hairstyles.

His method of faking his death is pretty great, by the way. He drives into an oil refinery in his cop car, calls in that he is investigating a break-in there, then lights it on fire and drives out on a motorcycle. The explosion has got to have been half the budget of the movie. The damage he caused must’ve been ten times his salary for the entire five years he was sheriff there. The guy ain’t subtle. Then, in the tradition of Zatoichi and Buford Pusser he starts a big fight in a casino, plays one side against the other, etc. And wears a tank top like John McClane, but two years earlier.

One of the writers is Norman Wexler. I don’t know if you’ve ever heard about him but this guy was considered a brilliant writer and script doctor in the ’70s. In 1971 he was nominated for an Oscar for JOE. In 1972 he was arrested for threatening to kill Nixon. In 1974 he was nominated for another Oscar for SERPICO. I don’t know how good a writer Frank Serpico is but he oughta try returning the favor and doing a biopic of Wexler, because that would be interesting.

Wexler’s mental illness was mostly unknown to the public until a guy called Bob Zmuda wrote about him (unnamed) in a biography of Andy Kaufman. Zmuda is the guy played by Paul Giamatti in the movie MAN ON THE MOON and he seems like a guy to spin some tall tales, but I’ve never seen anyone discredit his stories about Wexler. Zmuda claims he worked for three weeks as an assistant to Wexler. His job was to go around with his boss making audio recordings of his activities while playing him tapes of what happened exactly 24 hours earlier as well as music by John Philip Sousa. Wexler would go around barefoot with his feet spray painted black and cause confrontations with people (taking a shit in an airport lobby, paying old ladies to take off their clothes, etc.) in order to record their reactions to extreme situations and later transcribe them to inspire his gritty dialogue. When people got angry or would not do what Wexler wanted them to do Zmuda would open a case full of money and pay them off.

If that was really his method here is some of the dialogue it helped him write:

“You’re under arrest.”
“For what?”
“Impersonating a human being.”

Hmm, not that great. Still, if you’re a young writer trying to find your way it couldn’t hurt to try shitting in airport lobbies.

'80s Cheese Action Arnold Schwarzenegger Convertible
This entry was posted on Monday, April 13th, 2009 at 7:19 pm and is filed under Action, Reviews. You can follow any responses to this entry through the RSS 2.0 feed. You can leave a response, or trackback from your own site.