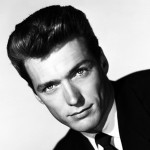 This time I watched it on the occasion of buying the new DIRTY HARRY ULTIMATE COLLECTION box set, which totally made my day and I did feel lucky punk and it is so good it would blow your head clean off and is the most powerful box set in the world. That is not really puns but you know what’s going on there, I think you get it. 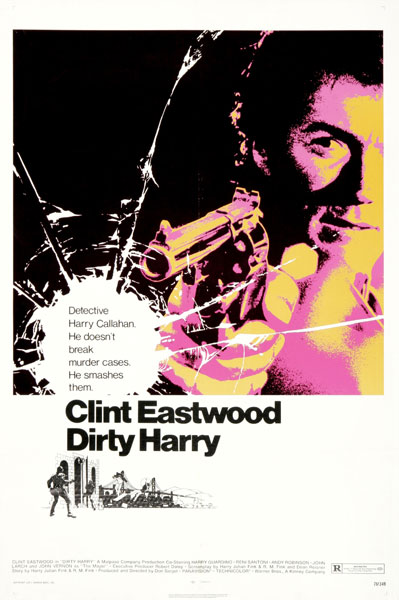 Anyway, I know I’m not talking to a bunch of rookies here so I’m not telling you anything you don’t know if I tell you this movie is awesome. Clint Eastwood is at his peak as far as just being a cool looking motherfucker, with his cocky hair do and his still handsome but already full of character early ’30s Clint face. There’s that shot when he’s eating the hot dog and just realizing that he’s gonna have to stop a bank robbery instead of finish lunch and he slowly turns around and it shows him in profile – you can tell that Don Siegel knew what a cool motherfucker he had in front of his camera there. The camera seems to be saying “holy shit, look at this guy!” Such an iconic profile. Put that fucker on the penny. Sorry Abe, you’re great, but look at this. I think you would agree.

That scene is one of my favorites, and obviously everybody in the world remembers that great “do you feel lucky” speech, but what I like best about it is definitely the hot dog. He foils a bank robbery while still chewing his hot dog. I do not know how you could be more casual about taking care of business. Maybe if he was wearing a bathrobe, or had curlers in his hair. Or was reading the newspaper, with bifocals.

This movie could easily be powered on the fuel of Eastwood alone, but Don Siegel is also smokin hot with his filmatism. He’s known as a workmanlike master of down and dirty b-movies, but the opening of this movie especially is the work of an artiste. That bright blue, rectangular swimming pool filling up the widescreen, the super fuckin cool stutter of funky Lalo Schifrin drums… you’re hooked into this movie way before they show Harry Callahan. And it all works especially well on this new DVD, the transfer is so much brighter and clearer. I didn’t know it looked this good.

Some of the extras on the DVD are pretty cool. I would like to see something even more in-depth, though. There’s no mention of the draft of the script Terence Malick supposedly wrote, no mention of the Zodiac killer or the cop they say Harry was partly based on (as seen in Dave Fincher’s ZODIAC). There is an interesting note that they considered setting the movie in Seattle, since it hadn’t been used in many movies. But they happened to scout Eastwood’s birth city of San Francisco first and couldn’t say no to it. Man, that would be so fuckin cool if Dirty Harry was a Seattle cop. Then maybe I would’ve felt better about getting pepper sprayed by SPD. Shit, we would have a statue of Dirty Harry I bet. We don’t have the best Jimi Hendrix statue, and no Bruce Lee, but I bet we could spring for a Dirty Harry in this alternate universe. Anyway, those guys dropped the ball but John Sturges and John Wayne picked it up and shot their DIRTY HARRY ripoff McQ in Seattle.

That’s why if you look at the message of the movie it’s pretty laughable, the deck is so obviously stacked. Watching this movie obviously we know that Scorpio is a serial killer and a sick bastard, we hate the fucker and love that Harry breaks his leg when he cries about “my rights, I have rights.” But that’s cheating, we have the omniscient power of movies. In reality we don’t have that power, so we don’t want cops to torture a guy they chased into a stadium. That guy might not be Scorpio, he might be you or your uncle who happened to be in the wrong place at the wrong time. In one of the more memorable jokes it’s mentioned that Harry got into trouble by shooting a guy he felt had the intent to rape. He felt this because the guy was chasing a girl while he was naked with a butcher knife and a hard-on. See, in a world where that could happen of course I trust Harry to shoot the guy. In the real world I’m afraid the cases are usually more complicated. So treating this as a serious argument against police accountability is pretty fuckin stupid. But that didn’t stop people.

I’m interested in the politics because the fact that I could love this movie so much says something. I don’t like people who would take these ideas seriously. I can’t relate to right wingers. I think those rights that Scorpio whined about are a big part of the ideals our country was founded on, and are more important now than ever before. I hate cops who think they don’t have to follow the regulations. And yet I love this movie. Maybe it’s just that this is a fun movie and is not really a serious political argument. Or maybe it shows that if a movie is good enough you can brush off the politics. Awesomeness transcends politics.

I mean, remember that shot when Scorpio has the school bus full of children and he’s coming towards the bridge and he just sees Harry standing there on top of the bridge, and he just about shits himself? How can we argue about left vs. right when THAT is going on? We might disagree on some of this stuff but we can agree that that is some cold-blooded shit right there.

Clint Eastwood Don Siegel
This entry was posted on Tuesday, June 10th, 2008 at 8:06 am and is filed under Reviews, Thriller. You can follow any responses to this entry through the RSS 2.0 feed. You can skip to the end and leave a response. Pinging is currently not allowed.