It’s gotta be hard living under the shadow of Tarantino, because #1 nobody can really live up to him and #2 the chin part of the shadow is just gigantic (wocka wocka). But I think Avary’s got some talent. 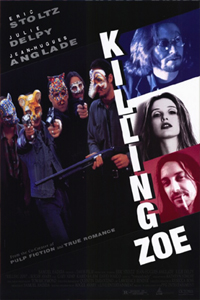 KILLING ZOE is Avary’s first movie as a director, and it has some of the early Tarantino elements: long, static shots of plot-free conversation, discussions of TV shows, needles, cool criminals who hang out, vintage movie posters, tip etiquette, joke telling, a character named Zed. No suits with ties, surprisingly.

Like TRUE ROMANCE for Tarantino, KILLING ZOE seems to be Avary’s fantasy about what he would be like if he was a gun-toting criminal and fell in love with a prostitute. The “production notes” on the DVD confirm that he chose Eric Stoltz to star because they looked and dressed similar. It definitely comes out of the mind of a dude in his early 20s, just imagining his life with some added gun deaths to make it cinematic. I’d guess he was into the same shit as QT but was the shy one (Stoltz doesn’t talk much in the movie) and was the friend who wanted to travel to Europe all the time (it takes place in Paris, although it was shot in L.A.). His fantasy prostitute girlfriend Zoe is more highbrow and cultural than Tarantino’s Alabama. Both are pretty new to being hoes, but Tarantino’s is an air-headed but sweet southerner who enjoys the films of Burt Reynolds, Avary’s seems smarter, is putting herself through college and does sculptures. But probly doesn’t taste like a peach.

The feel is very different from Tarantino’s movies. Dryer, less bluster, less macho, with an electronical score by “tomandandy” instead of digging out the dusty old soul and rock and roll 45s. The criminals here think they’re tough, but if they tried to work for Joe from RESERVOIR DOGS they’d run home in tears before he was done talking to them. They’re not pros – this might even be their first time, because they all live in an apartment together like college dudes. Or maybe they’ve done it before and blew all their loot on drugs, French Brian DePalma posters and monkey food (one of them has a pet monkey that pees on another guy’s Billie Holiday records).

Stoltz plays Zed, an American in Paris to meet up with his childhood friend Eric (Jean-Hugues Anglade). They’re planning on robbing a bank on Bastille Day, which is tomorrow. Before they meet up Zed has a long cab ride and a night with Julie Delpy as Zoe, the prostitute (although she’s offended when he calls her that). I don’t know why Avary is so into an American man and French woman talking in a hotel, but that’s his thing I guess.

After he meets up with Eric the next section of the movie is an overly long drug binge: dudes driving fast, snorting coke, talking about The Prisoner. They go to a dixie jazz themed club, the camera lens is distorted, things are confusing.

Then the third chunk takes place in the bank where they take everybody hostage, including Zoe, who’s there wearing a nice dress and sweater like a non-prostitute. Turns out Zed is the safecracker – he has a whole case of equipment and starts setting up to blow the vault. He doesn’t do it with the speed and intensity of a pro, though. I think he’s a hobbyist, a science nerd who enjoys puzzles like this more than a guy who wants to steal a bunch of money.

I’m not really sure why it’s KILLING ZOE or even why she should be the focus of the title. Of course there’s a love story there, and the ending where you can’t think about it too hard because not only will you wonder why the fuck the police didn’t bother to question them, but you’ll suspect that two people who fell in love because one paid the other for sex and then they survived a bloodbath at a bank the next day will not necessarily turn into the greatest relationship. But the main conflict of the movie is between calm, reasonable Zed and death wishing Eric, who doesn’t care if he dies and therefore lives life to the fullest in drugs, transportation, crime and pet ownership. He just doesn’t give a fuck. So it’s kind of like a LETHAL WEAPON mismatched buddy movie, the suicidal nut and the uptight family man.

On those production notes you learn that Avary had some pretty pretentious subtext in mind for the movie. I noticed a vintage movie poster from some viking movie in their apartment, and also there’s a conversation where somebody asks him “You like viking movies?” I thought that was funny because who the hell is really into viking movies, specifically? I’m sure there are a couple good ones I’m not thinking of, but it’s not like it’s a thriving genre full of beloved classics. Anyway it turns out Avary likened these characters to vikings, a bunch of brutes that just rape and pillage and wear funny helmets (in this case masks) and don’t worry about tomorrow. It’s all about getting maximum pleasure right now and not giving a shit about if they hurt anybody else or if it has consequences. Apparently Avary made the cast read Beowulf to get them in the right mindset. I doubt it did much for them. But it’s cool to know he was obsessed with Beowulf years before he made the movie of it.

I’m not sure we know enough about Zed. If he’s so grounded why is he working and hanging out with these assholes? And why’d he get into safecracking in the first place? I can’t really picture how this guy would fall into that racket. Not that every character needs an origin story, but he’s not cool enough for us to enjoy the mystery. It seems more like a character that’s not completely thought through than like an enigma. We only root for him because the camera’s on him and because the other guy is such a douche. He does Mr. Blond shit without the menace or charisma.

These are kind of nitpicks, they’re not huge problems, but maybe they’re part of why the movie falls a little flat. I don’t think this is that great of a movie, but it’s a passable bank robbery thriller that gets a bit of a bump from being such a time capsule into that moment in pop culture when independent film was exciting, it hadn’t turned into a meaningless term, and we hadn’t even been inundated with Tarantino wannabes yet because PULP FICTION hadn’t quite come out. It has some good thrills in it (like when Eric goes nuts and throws a bomb into the vault with an innocent security guard) but honestly my favorite scene is the very first one, just a long take of Eric Stoltz in the back of a cab being kind of a dick to the cab driver that’s trying to make small talk with him.

Eric Stoltz heists Julie Delpy Quentin Tarantino Roger Avary vikings
This entry was posted on Friday, March 4th, 2011 at 2:31 pm and is filed under Crime, Reviews. You can follow any responses to this entry through the RSS 2.0 feed. You can skip to the end and leave a response. Pinging is currently not allowed.