In THE BLOB Steve McQueen plays “Steve” and he’s supposed to be a teen. But he was actually 28 and looked about the same age as he did in THE GREAT ESCAPE. Therefore I don’t think there’s anything unreasonable about leaping to the conclusion that he was re-enacting true events that had happened to him for real. The Young Steve McQueen Chronicles. None of this is included in his biography and some of what happens here (like his father being a store owner) don’t jibe with the established facts. But what importance do the details have when there is an essential truth at work here, the truth that a teenaged Steve McQueen sighted, tracked, battled and helped defeat The Blob? In a sense, this is BATMAN BEGINS to Steve McQueen’s life. 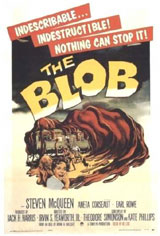 Young Steve is already good at driving fast – his harrowing chase after the meteor de-crowns the local drag racing king and pre-sages BULLITT and LE MANS. There’s no evidence that he’s picked up motorcycles yet. One new fact we learn about McQueen is his code of honesty. He’s constantly flaunting his record of truth, and his father has such faith in it that he knows Steve isn’t lying about monsters. But the authorities for the most part never believe him, they think he’s trying to make a fool out of them.

Despite the autobiographical docudrama realism, THE BLOB is a goofy movie. Pretty much whenever there’s a parody of a ’50s drive-in type movie it’s always based on this: the teens making out in a car who see a meteor or UFO, the old redneck who sees something from space and pokes it with a stick, the cops not believing the teens. In fact, I recently watched NIGHT OF THE CREEPS and the opening of that (although in black and white, and this is in color) is basically THE BLOB.

And people laugh at this movie, saying the Blob is just red Jello. That’s bullshit. The Blob is red jelly from a donut. I think in the context of the time and this type of movie the effects are actually pretty great and, at least before it gets real huge, pretty disturbing. When it first gets on the old man’s hand it’s like a big wad of convulsing, oozing pus. Later, when it’s a small Blob, say, the size of a dog, its movements remind me of the T-1000. I can imagine the digital effects they’d use for that today, and I don’t think they’d look more real. Admittedly, when they start squeezing jelly through miniature models it gets more laughable, but still. Give them some credit.

One question: is The Blob an entity from space, or is it the guy who touched the entity from space? Did it eat that poor sucker or just cause him to grow? If the man grew, does it retain his consciousness? Is The Blob really that old man with a real bad infection, and he’s trying to get home? Or looking for his dog? Or lashing out against the town where everybody knows everybody by name except him, the place he must’ve wanted to turn his back on when he moved out to the sticks?

Hell, even if it’s an alien mind, is it intelligent? Is it soulful? Do Blobs dream? Do they cry? Do they love?

But back to the guy. As silly as people remember this it’s gotta be one of the earlier examples of “body horror.” The guy has this thing on him and it won’t stop growing. It could be in a Cronenberg movie. Later on it’s just a delicious strawberry or raspberry flavored monster, but in the beginning it’s a disgusting parasite.

And since it all begins at the makeout spot you could almost read it as symbolic of a venereal disease, or a “social disease” as young Steve would probly say. Or it could be anti-sex altogether, like all the sex=death slasher movies that came years later. Except it’s not the necking teens who get blobbed, it’s the old man with the little dog, and who knows how much he’s getting. Not much would be my first guess. Not any would be my second. And my first guess is charitable.

So now that I think about it I believe THE BLOB is sex positive. The heroes are a young, attractive couple who sneak out at night (read: sexually active) and the villain has no visible genitalia. This is especially important if The Blob is in fact the being from outer space and not what’s left of old meteor-poker. It’s certainly possible that there are girl Blobs, and that this one is running rampant just to impress some girl back home. Maybe she broke his heart and in a grand gesture he hurled himself into space on a meteor to be far away from the memories, like a young man joining the military or the peace corps to escape the memory of a lost love. But the bigger he grows (the Blob moreso than the young man) the more he hurts.

That could be it, that could be what’s going on here, but it’s all speculation. So until there’s more evidence available, like a BRIDE OF THE BLOB or DAUGHTER OF THE BLOB type sequel, I guess I’m gonna have to assume they’re asexual.

If you like old campy movies like this you should check it out. Pretty silly, lots of talking, but still fun, and enlightening about McQueen’s early adventures. The people have a right to know.

Steve McQueen
This entry was posted on Tuesday, November 10th, 2009 at 5:41 pm and is filed under Horror, Reviews, Science Fiction and Space Shit. You can follow any responses to this entry through the RSS 2.0 feed. You can skip to the end and leave a response. Pinging is currently not allowed.