Also did I mention he’s 12. It’s kind of like Doogie Howser. 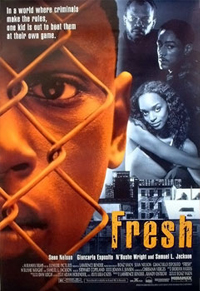 He’s got normal kid problems. He’s shy talking to the girl he likes, he misses his older sister (BLADE’s hematologist friend N’Bushe Wright) when she’s gone, his friend Chucky is an idiot, he keeps getting to class late, there are too many kids living in his apartment, his dad is a drunk. But also he has to deliver these drugs, people are always trying to short him, crackheads offer to suck his dick and his boss Esteban (Giancarlo Esposito pre-channeling Peeples Hernandez from the SHAFT remake) is always pressuring him because he wants to hook up with his sister. Which is harder when it’s a smack dealer than just some kid at school or something.

Fresh isn’t supposed to see his dad (Samuel L. Jackson, when he was slimmer and had hair, remember that?) but he does – playing chess against him in the park. Dad sort of coaches him, giving him harsh advice, belittling his game, being more like a Pai Mei than a dad, except when he lectures him for using the n-word. But his Machiavellian chess philosophy pretty much tells Fresh what he needs to do to improve his situation. The kid starts enacting a master plan to play all the dealers against each other. He’s trusted with a huge delivery because nobody would expect a kid that small to have that much smack in his backpack. But then he’s able to use that smack for his scheme because nobody expects a kid to have the brains or the balls to fuck everybody over. Through a series of tricks and set ups and lies he knocks them down like the chess pieces on his board. He knows what to expect from them and what they expect from him. It’s brilliant and it’s cold-blooded. Even his school friends are pawns. There is a body count. It’s not pretty. It’s like THE 400 BLOWS x CLOCKERS + YOJIMBO with a touch of FIRST BLOOD ending. A good substitute for your crumb crushers when SPY KIDS or AGENT CODY BANKS is checked out at the video store.

And the beauty of it is that it never tells you what he’s up to. You just have to watch the plan come together. This little badass plays everybody. Remember when kids that played chess were nerds? This one isn’t. He’s more like Superfly, or The Young Nino Brown Adventures.

Watching it now it reminds me a little of CITY OF MEN, the TV show spin-off of CITY OF GOD. I saw some of the first season episodes and they’re this real matter of fact look at a kid’s life in the favelas, younger kids than in CITY OF GOD, and they’re working for the drug dealers, not really liking it but knowing that’s what they have to do to survive. They have to get in good with these dangerous men, not get busted by the cops, do a good job and stay out of people’s way, and also try to do okay in school. Well New York’s not as bad, but it’s a similar way of life for this kid. If Esteban wants you to do something you’re gonna have to do it, even if it’s gonna make you late for school again.

There are some good characters in the movie. Esteban is creepy and scary, but you can also see that he genuinely likes Fresh and that that makes Fresh feel good. And you can see how his dad means well too but just doesn’t have a clue how to be sensitive. He helps equip Fresh mentally for what he needs to do, but not emotionally. He also has a funny monologue about which famous chess players he’s met and how he could beat them.

But the most memorable supporting character is Fresh’s loud-mouthed friend Chucky (Luis Lantigua) who’s the opposite of Fresh. Fresh is very reserved but is the real deal, Chucky is a bragging dumbass and a total phony. He has none of the experience, intelligence or skills of a real criminal but he tries to imitate the way they look and talk and seems to convince himself that it makes him “real.” He keeps saying “I bust the stoopid moves!” and every time he says it seems more convinced that it means something. He also talks about the Punisher. (Writer-director Boaz Yakin wrote the Dolph version of THE PUNISHER.)

By the way, I noticed something. This movie has a real devastating subplot about Fresh’s dog who Chucky enters in a dog fight. In THE ROOKIE (co-written by Yakin) there were dog fights going on in a bar and the dogs attacked Charlie Sheen and he had to shoot one of them. In FROM DUSK TILL DAWN 2 (also co-written by Yakin) I remember there was a dog that was being trained for fights. I don’t remember any dog fights being in THE PUNISHER, but I’d be very surprised if there weren’t some in UPTOWN GIRLS, because I don’t know how else Britney Murphy and Dakota Fanning’s characters would meet other than training innocent animals to viciously maul each other to the death for the entertainment and gambling pleasure of their owners.

My point is that Boaz Yakin is a tireless advocate for this up and coming sport. Now that it’s getting alot more mainstream exposure with Michael Vick and everything maybe he’ll get a shot to remake REMEMBER THE TITANS with his original vision of it being about pitbulls.

From what I’ve seen, Yakin has never made another movie that’s similar to FRESH at all in content or quality. He did a couple indie dramas like A PRICE ABOVE RUBIES with Renee Zelweger, and most recently he co-wrote THE PRINCE OF PERSIA. But I’ll keep looking out for him because this one is too good to be an accident. I’ll try not to underestimate him, but hopefully he’ll do more than just keep busting the stoopid moves.

Boaz Yakin Giancarlo Esposito Samuel L. Jackson
This entry was posted on Monday, June 14th, 2010 at 12:30 am and is filed under Crime, Reviews. You can follow any responses to this entry through the RSS 2.0 feed. You can skip to the end and leave a response. Pinging is currently not allowed.