It’s about a crazy day in the life of a guy named Red (Luke Bracey, GI JOE: RETALIATION, THE NOVEMBER MAN, POINT BREAK remake, HACKSAW RIDGE) when he’s released from a two year prison bid and returns to his French artist wife Chloe (Nina Dobrev, xXx: RETURN OF XANDER CAGE) and daughter Beatrice (Ella Ryan Quinn). I don’t think it’s ever specified what he did time for, but he does go to see his friend Leroy (Clé Bennett, JIGSAW) – who has changed his name to Le Roi – and the fact that they run a lock and key shop with a cool basement hidden inside a safe and inside that is a huge safe that he attempts to crack for fun seems like a hint.

“Guy gets out of prison” is obviously a standard pulp ingredient that I enjoy. I’ve used it myself – more than once. But for Avary it’s not bullshit, it’s personal. In the gap since 2007’s BEOWULF (co-written with Neil Gaiman and directed by Robert Zemeckis) he did some time (for manslaughter after a car accident that killed his friend and injured his wife). On the credits he even thanks the guards and inmates of Ventura County Jail. But I don’t think you’d have to know that to notice that this isn’t the standard portrayal of the post-incarceration experience. Yes, it includes things we’ve seen before like wanting to immediately have sex, being sad to have missed some of his daughter’s growing up, being harassed by a parole officer, and having someone come after him for revenge. But without ever being heavy-handed about it, it adds enough specificity for it to feel like more than just a plot point. Red mentions not having seen a movie in two years. He’s freaked out about going out into the world. He wants to just be lazy and lay around in bed. And it’s not the usual thing where he jumps back into crime or gets reluctantly pulled into it. It’s genuinely about him trying to repay his wife’s support and not get taken away from her again. 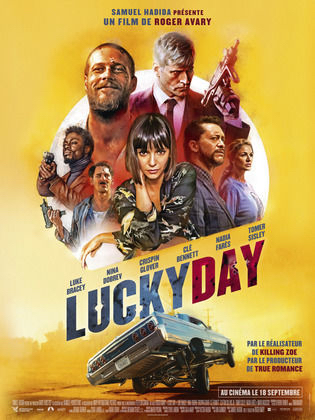 I really like this gimmick: his goal for the day is to be there for his wife during her art opening, and he never complains that her show is exact replicas of all the walls in the prison he just got out of. And that’s another thing – the prison is not one of those exaggeratedly dank hellholes we usually see. It’s brick walls painted bland colors, aged, but not filthy, with graffiti, but not too much. Simple stuff, in pencil or ballpoint pen, maybe. More like a school, the type of school they say looks like a prison. It seems very authentic.

Anyway, he got out, but it’s still feels like it’s all around him.

Glover (who was Grendel in BEOWULF, come to think of it) plays the person coming for revenge, Luc Chaltiel. He’s an absolute psychopath who brazenly murders several random people he encounters while headed for Red. I think most of us can agree that Glover is fun to watch in any movie. If there’s a movie he’s in where he doesn’t add anything I can’t think of what it is. Admittedly, I would rather see him silent, as in CHARLIE’S ANGELS, than doing a cartoonish French accent. But also it’s kind of amusing, and moreso after another character indicates that Luc isn’t actually French.

Occasionally it turns into one of those slasher movies where you’re just watching to see what the killer will do more than being afraid of him. For example one of the people he kills has a certain style of ridiculous facial hair and according to the credits is named “Gavin McAnus.” Luc also has a run in with another French-accented person named Louis, played by the great Mark Dacascos (remember, Avary did uncredited rewrites on CRYING FREEMAN and executive produced BOOGIE BOY).

There’s a feeling of randomness to it all that’s both part of the appeal and what makes it feel a little light weight. It introduces us to a series of colorful characters ranging from the family’s charming, French-speaking, Selena-t-shirt-wearing Mexican nanny Lolita (Nadia Farès, THE CRIMSON RIVERS) to the sexually harassing gallery owner Derrek Blarney (David Hewlett, PIN, SCANNERS II: THE NEW ORDER, CUBE, SPLICE, THE SHAPE OF WATER), who tries to ruin Chloe’s life after she rejects his ridiculous sexual advances. Before that he’s already so cartoonishly villainous that he literally has a twirly mustache. Painted on. Lovingly. By an assistant. There’s also a bartender/arms dealer (Tomer Sisley, THE NATIVITY STORY, LARGO WINCH) who doesn’t seem that bad, but he has a Hitler mustache – I guess as a parody of weird hipster shit? I don’t know.

Luc’s misadventures are completely vile, alternating between amusingly so and disturbingly so. There’s a not-perfectly-tuned-but-still-kind-of-funny black humor to it, like when a character has his head graphically exploded in a bar and his body stumbles across the dance floor pumping blood from the neck stump while a sad drunk lady dances on stage undisturbed. There’s a part where Luc steals a lowrider with hydraulics and I got a big laugh not as much from the way he uses it for violence but just the sight of Crispin Glover driving a car seemingly stuck with one wheel in the air.

Clifton Collins Jr. (FORTRESS, ONE TOUGH BASTARD) has fun chewing it up as Red’s pain-in-the-ass cowboy asshole p.o. Ernesto Sanchez. He accosts him at the shop and makes him provide a urine sample on the spot. My favorite touch in his performance is that before he leaves he holds the piss canister up to his nose and sniffs. I’m not sure if Ernesto thinks that’s a cool, threatening thing to do or if he’s just appreciating what he considers a top shelf urine sample.

This scene is also a good example of some of the goofy uses of language in the dialogue that seem slightly off but in a way I really appreciated. When Le Roi gives him some shit he asks him, “Are you a dissenter?” and Le Roi says, “I like to think I’m at de center, yeah.”

I like the shift from this character being such a ridiculous dick to being relieved that this cop happens to be on his balls when Luc shows up. Not that he presents a positive image of law enforcement – he still threatens to “blow you away with complete impunity!”

It kind of takes place in its own strange world. It’s not a period piece, but nobody has smart phones. It’s filmed in Canada, but I believe takes place in the United States, but in a part of town run by French criminals I guess? (In an interview Avary attributed that mainly to being a French co-production.)

There are recognizable Avary elements. The score is by Tomandandy, who got their start with KILLING ZOE and also did his MR. STITCH and THE RULES OF ATTRACTION before going on to FASTER, THE HILLS HAVE EYES, P2, RESIDENT EVIL: RETRIBUTION, etc. In case you didn’t notice from his segment of PULP FICTION, Avary is really into the idea of laying around in bed being lovey dovey with a beautiful woman with an exotic accent. The basement reminds me of where the gang hang out in KILLING ZOE. There’s a shop seen in the background with signs identifying it both as “Quentin’s Dupe System” and “QT Dupe System,” if you want to speculate whether that’s a dis or an in-joke. And this is most likely a stretch, but it seems to me his documented horror fandom shows through in a chase through catacombs shot very similar to TEXAS CHAINSAW MASSACRE 2.

KILLING ZOE star Eric Stoltz is credited as “the voice of authority,” but I didn’t catch what that was. And it didn’t occur to me that since Stoltz’s character in KILLING ZOE was a safecracker named Zed in love with a French woman named Zoey this movie about a safecracker named Red and his French wife Chloe must be a kinda-sorta-almost sequel. But it’s less slow and gloomy, and more fun.

Well, except some of the women in this movie are put through harrowing things that seem jarring within the overall silly tone of the movie. So take that as a trigger warning. But part of why it’s upsetting is because I found myself liking these characters and wanting things to be okay. Bracey, with his Australian accent, is more charismatic than I’ve seen him before, and Dobrev kind of does the heavy lifting. In the aforementioned interview, Avary discusses these characters as “allegorical versions” of his family. He wrote the script while incarcerated and sent the scenes to his then-teenage daughter Gala so they couldn’t be confiscated as contraband (she ended up credited as executive producer).

I’m not sure LUCKY DAY will prove especially memorable, but it was a nice low key treat for me. It fits with a genre we don’t see as much of these days, but it has its own quirky vibe and personality. In fact it’s kind of the reverse of some indie crime films in that Avary seems more invested and sincere about the wholesome parts than the grim ones. If that sounds like your kinda thing I say it’s worth checking out.

Cle Bennett Clifton Collins Jr. Crispin Glover David Hewlett Luke Bracey Mark Dacascos Nadia Fares Nina Dobrev Roger Avary Tomandandy Tomer Sisley
This entry was posted on Thursday, September 24th, 2020 at 10:48 am and is filed under Comedy/Laffs, Crime, Reviews. You can follow any responses to this entry through the RSS 2.0 feed. You can skip to the end and leave a response. Pinging is currently not allowed.