Of all David Cronenberg’s movies the one that lends itself the most to sequels is SCANNERS. I mean I guess they could’ve easily done M. BUTTERFLY: APOCALYPSE or DEAD RINGERS: THE CRACKDOWN, but in my opinion extending the SCANNERS story makes a little more sense, so that’s the one they made a bunch of sequels to. It’s funny though – I think looking back we have an understanding of Cronenberg as a soft-spoken genius with half his brain devoted to insane perversion. We’ve seen his chest vaginas, gristle guns and everything. We’ve seen him stay true to his vision for 30 years, and once he got bored with the New Flesh and hooked up with Viggo it was just as good and not much more mainstream. He’s a true Canadian original.

But back in ’91 when this came out I think they still thought they could tame him. They must’ve missed DEAD RINGERS, and NAKED LUNCH hadn’t come out yet. He folded his twisted sensibilities into THE DEAD ZONE and THE FLY, both pure Cronenberg visions that could pass for commercial entertainment. And all his movies had great gore in them. Melting, bubbling, tearing flesh, all done with rubber and foam of course, and it still holds up better than anything done with pixels. So that made him a hero to the Fangorians, and therefore a “horror director.” And that means SCANNERS is just a regular genre picture just asking for a lackluster part 2.

Like the first one it starts with a grimy drifter scanner going nuts in public – he goes to an arcade and wins all the video games telepathically. He gets picked up by an organization but instead of getting cleaned up and becoming the hero he just gets used as an evil henchman. This guy is guilty of serious overacting. I wouldn’t say mega-acting because even if it was a deliberate artistic choice I think it was a poor one. When Nicolas Cage mega-acts he seems genuinely nuts. This guy seems like he’s fakin it. 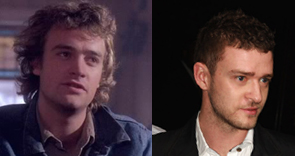 The real hero is some dude who looks like Justin Timberlake (David Hewlett) who’s a student at a veterinary school (he uses his powers to cure a cute puppy). He’s found out in the same way martial artists often are – he foils a convenience store robbery and people see the security camera footage of how awesome he is. Some scientists tell him what he is and help him hone his powers, supposedly to help society. They’ve been looking for good scanners but most of them freak out so they give them a drug that turns them into ghoulish junkies. They mostly keep those guys in the basement and when they use them outside it’s easy to spot because hey, that security guard looks like Lurch’s shorter cousin, must be a scanner.

He starts to get suspicious when they have him scan the mayor at a press conference and make her appoint the wrong person as acting police chief. That’s what this is all about – a takeover (which is weird since that’s the subtitle for part 3). The new chief talks Machievellian shit about the greater good, but the actor plays him as evil, so it’s hard to think of him as just misguided. 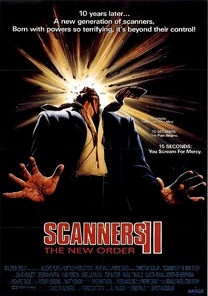 Our scanner decides to quit the team and go on the run, and he has to take on the conspirators himself. The writer, B.J. Nelson (LONE WOLF MCQUADE) must’ve thought scanning was like the Force, because he put in some stuff for the Star Wars trekkies. There’s a part where his dad (SPOILER coming up next word) dies and telepathically tells him he has a sister, just like Yoda did as he was (HUGE YODA SPOILER) dying in Return of the Jedis. Also he finds out he’s the son of Cameron Vale from part 1.

I have to give this movie some credit, because it has some pretty cool ideas in it. The best new scanner concept is that the brother and sister focus in on one of their enemies until they can see through his eyes, then they remotely control him into a secure building, then scan other people through him. Daisy chain scanning. But then the bad guy shows up and it’s three scanners poking around in the same head, so that causes problems. By the way, a medical tip: don’t leave a big rack of syringes on a table with the needles pointing up.

Also there’s some good effects – veins popping, heads bulging, and of course they do 2 (two) head explosions this time. In the first one the bad guy was pretty much trying to take over the world by leading a scanner uprising, in this one they’re just trying to rule the city with an iron fist. So it seems like a de-escalation but it’s not, because there are 2 exploding heads. That’s how sequels work.

I thought they were gonna do three exploding heads for a second there but with the last guy they stop right before it hits the breaking point, leaving his face horribly deformed. I like that. Also there’s a weird, ambiguous ending where I think brother and sister both have two pupils per eye. I think it means they both can see through each other now. Not sure.

That reminds me, there’s some weird, incestuous undertones when he scans his sister and she has to tell him to be more gentle. I’m not sure how I feel about that, but at least they didn’t go completely safe.

But without Cronenberg’s style the movie just doesn’t work. They turned it into a normal movie. The guy has a mullet, the end credits have a song that sounds like Brian Adams or somebody. The score contains what I think should be called “mystery sax” – you know, that cheesy type of saxophone they put on movies and TV shows when they want to say, “You know, this is like one of those old timey private eye type stories.”

Director Christian Duguay was considered a cool, stylish, MTV type director at the time. I don’t know this from any research, but from the fact that there’s a scene that takes place in a room only lit by a light behind a big rotating fan, creating a strobing effect. And there are a bunch of mannequins in the room. But it’s the fan that’s the dead give away. For some reason they were all into that trick, they really thought it looked amazing. Cronenberg’s scene taking place inside a giant sculpture of a head still looks cool. The fan trick I don’t think holds up quite as well.

Duguay went on to become an Emmy nominated director of mini-series such as JOAN OF ARC and HITLER: THE RISE OF EVIL. Hewlett became a regular for director Vincenzo Natali, appearing in CUBE, NOTHING, CYPHER and SPLICE. But also BOA VS. PYTHON.

If you’re a scanner you can just read my mind instead of continuing to read this, but all I got left to say is I wouldn’t really recommend this picture.

Christian Duguay DTV DTV sequels
This entry was posted on Friday, June 4th, 2010 at 2:29 am and is filed under Horror, Reviews, Thriller. You can follow any responses to this entry through the RSS 2.0 feed. You can skip to the end and leave a response. Pinging is currently not allowed.