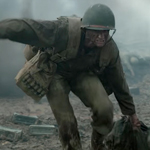 But not until his first furlough, because shortly after successfully wooing her he announces that he has to enlist.

We get all the usual tropes of the war movie: the gung ho older brother who signed up first, the parents who worry about his safety but he won’t be swayed because it’s his duty, the group of grunts with their quirks and home towns and nicknames, the getting singled out by the cruel drill sergeant Howell (Vince Vaugh, PSYCHO), the grueling training without true understanding of how much worse the actual combat will be, etc. 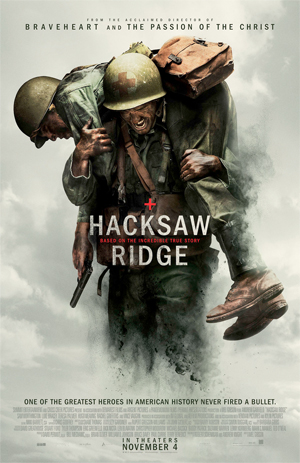 But this familiarity is the spoonful of sugar to get down a critique of standard notions of masculinity. Doss looks like a kid wearing a grownup helmet, and he’s surrounded by nothing but broad-shouldered, square-jawed men who look like the painted covers of WWII pulp magazines. For example there’s Hollywood Zane (Luke Pegler, SEE NO EVIL), who sports a Clark Gable haircut and mustache with a bodybuilder physique; he’s introduced naked doing pull-ups. And then this slim, big-headed dork comes in and refuses to even touch a rifle during training. This brings him scorn and disbelief from Sergeant Howell and Captain Glover (Sam Worthington, AVATAR) as well as beatings from his fellow soldiers.

There’s a powerful moment when Howell finds him bloodied and seems to now feel sorry for him, giving him the ol’ “It’s nothing to be ashamed of” pep talk as he assumes he’ll be leaving. But to everyone’s surprise Doss does not quit or snitch on his tormentors.

It’s Smitty (Luke Bracey, POINT BREAK remake) who comes down on him hardest, picking a fight and taunting him about “turning the other cheek” without seeming to register just how fucking badass that is. “Yes, you hit me. Let me offer you seconds.” He’ll understand once they go into combat with the nearly impossible task of taking over a steep ridge where others have been massacred before them, climbing up and retreating six times in a row. They never forget how crazy it is for Doss to insist on running into a hellhole with no weapons just to help the injured. But they start to understand how brave it is.

This being a Mel Gibson directorial work, you can be sure it vividly illustrates that old adage that “war is hell.” They must’ve done alot of research into all the horrible things that can happen to a body in war. But you still never get used to the sudden PING!s as holes appear in helmets and spring geysers of blood, the piles of intestines, the bones protruding from legs, the masses of shredded meat hanging from stumps, the people flipping through the air on fire.

Those scenes are brutally effective, but we’ve seen that sort of thing done to perfection in SAVING PRIVATE RYAN and other great WWII movies. What is completely unique about this one is that it’s a guy trying to rack up rescues, not body counts. He’s running through the maelstrom tying up bloody appendages, administering morphine injections, carrying people on his shoulders, ignoring pleas to leave people behind. In the climax of the movie the troops retreat but he stays behind finding survivor after survivor and lowering them down the cliff. He even tries to help some Japanese soldiers.

As JARHEAD pointed out, even the most anti-war films inevitably make war seem cool to some viewers. I think AMERICAN SNIPER is way more complex than most people give it credit for, but of course many will watch it and think it’s awesome how many “bad guys” our boy shot. HACKSAW RIDGE is not an anti-war film, but it’s an extreme depiction of the ugliness of violence juxtaposed against the glorification of a pacifist, a healer. Doss is a conscientious objector who has to fight for the legal right to serve, then survive harassment and bullying for his beliefs, and then faces a much more difficult task than the other soldiers, but achieves far beyond what anyone believes possible, after the others have already given up.

It’s a very satisfying underdog story, seeing the soldiers’ eyes go from hatred to worship. They start to go out of their way to honor his different religious beliefs. The soldier who gets the task of going back to find his Bible in the war zone acts like it’s the greatest honor of his life. And I guess I should’ve seen it coming but I found it very moving when Smitty volunteered to go with Doss on a mission and the two camp out together for a night and become buddies.

This is probly a really good one for strong Christians who are okay with gory war movies, but I don’t feel it’s religiously preachy. Since Doss’s convictions are all about being good to people, not moral judgment, they can easily be equated to other religions or secular codes of honor. But I was only half joking with my Baby Hitler comment before. There are some difficult questions there: if he’s against killing under any circumstances, how can he support a war, even one this just? I’m not sure how his principles are helping in this situation. Even so, it’s very inspiring to see him staying true to his beliefs against great adversity. It’s hard to imagine the bravery of just holding his head high through boot camp, let alone his extraordinary acts during combat.

I knew the Seventh Day Adventists, or at least some of them, were vegetarians, and really late in the movie this is mentioned. He’s probly been getting food he couldn’t eat all this time and not complaining to anyone! I’m not religious, but I stopped eating meat 25 years ago. I’ve never mentioned that here partly because people alot of people get weirdly up in arms when they know that about you. As soon as you say you’re a vegetarian they assume that you’re judging them for whatever they eat. Trust me, I am not judging you and I doubt Doss is either. But I wanted to bring it up this one time because I can’t think of another non-mocking vegetarianism reference in a movie. So I appreciate it.

There are some ways that the movie (written by Robert Schenkkan [The Pacific, also an actor in PUMP UP THE VOLUME] and Andrew Knight [THE WATER DIVINER]) is clunky, some awkward telling-when-they-should-be-showing moments. When Doss, speaking passionately about his duty to sacrifice as much as others, describes people from his home town committing suicide because they couldn’t enlist, I couldn’t help but think it would’ve been more interesting to delve into that in the first half than to show him getting a girlfriend. I don’t think it’s as unqualified an artistic success as certain people consider APOCALYPTO or BRAVEHEART to be, so I was surprised it was considered good enough to overcome Gibson’s persona-non-grata status in Hollywood. He can barely get a release for GET THE GRINGO or BLOOD FATHER but all the sudden he has best picture and even best director nominations! It’s weird.

But I kind of get it too, because the movie has really stuck in my mind since taking a ferry to see it a couple weeks ago (the closest theater playing it was on a small island). The central theme of sticking to your principles is powerful, and there are other ways that it’s surprisingly nuanced. One example: Doss’s father (a great performance by Weaving) is an abusive alcoholic who terrorizes his whole family, almost to the point of tragedy. But we also see his constant pain over all the friends he lost in the war, and that he’s capable of going the extra mile to help his son. It’s a very human portrait, a bad person with good or sympathetic qualities. Which I guess is a good thing to have in a movie by a director/actor whose work I love despite being suspicious of him because of disgusting things he’s said and done over the years.

If he’s a bad person, at least he put HACKSAW RIDGE into the world.

Andrew Garfield best picture nominees Hugo Weaving Luke Bracey Luke Pegler Mel Gibson Sam Worthington Teresa Palmer Vince Vaughn
This entry was posted on Wednesday, February 22nd, 2017 at 9:56 am and is filed under Drama, Reviews, War. You can follow any responses to this entry through the RSS 2.0 feed. You can skip to the end and leave a response. Pinging is currently not allowed.