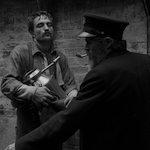 Friends, I am here to announce that I have officially transitioned from guy who intellectually respected and sort of liked THE WITCH to card carrying Robert Eggers Fan Club member and honorary district captain. The dominos that fell were first viewing of THE NORTHMAN —> second viewing of THE NORTHMAN —> second viewing of THE WITCH —> finally getting it together to watch THE LIGHTHOUSE. Eggers has a unique style and approach and I’m tuning more and more into his frequency. This one is interesting because it’s clearly the work of the same director, except his sophomore movie here has some humor in it. Actual laughs. And I’m not counting the farts.

The time and location for this one is 1890s New England, on a tiny lighthouse island, and mostly inside the lighthouse. Ephraim Winslow (Robert Pattinson, THE ROVER) is a young rookie contractor just starting a four week gig as a lighthouse keeper with veteran “wickie” Thomas Wake (Willem Dafoe, LIGHT SLEEPER, SPEED 2). The style is black and white, square 1.19:1 aspect ratio, appropriate for a movie set in a claustrophobic vertical structure. I’d seen pictures and it looks so old-timey with Pattinson’s giant mustache and Dafoe’s upside down pipe that I pictured it as one of those stylized retro movies mimicking old silent film techniques. But no, it’s all very raw, filmed largely in remote locations with harsh climates, and a lighthouse they constructed. Looks fuckin stunning. 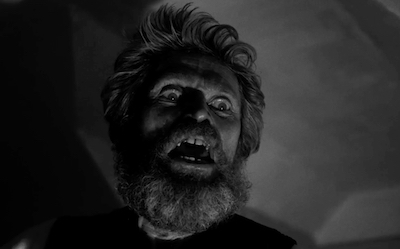 As with the other Eggers joints it’s got a love for linguistic period detail – archaic terms, phrasings, idioms and intonations, not to mention plenty of presumably well researched lighthouse and sailor type lingo. I think some have claimed the dialogue in his movies is hard to understand, but I haven’t had that problem. But even if it was like Shakespeare where I struggle just to follow the basic gist of it, I don’t think it would matter as much on this one. It is an indisputable fact that Willem Dafoe was put on this earth for the specific mission of one day growing a bushy beard and doing a whole movie croaking out weird seaman slang and pushing every muscle in his face to its maximum potential. He has and will accomplish much more in his career, but if he had only sat in a tube his entire life until coming out this one time to slip a pipe in his mouth, give this one performance and then descend into the ocean to spend the rest of his years among the merfolk, it would’ve been a life well lived and a civilization well served.

And Pattinson is almost as good. He’s kind of the lead and a little harder to read. At first Winslow stays very quiet, clearly finds Tom annoying, but doesn’t want to offend or anger him. Tom lords over him like a real asshole boss, like when he waits for him to heave a huge oil container all the way up the stairs before giving him a smaller container he could’ve filled, then tells him to bring the big one back down immediately. And yells at him for trying to enter the top part where the light is. Winslow keeps politely pointing out what the manual says his duties and the rules are but Tom acts like he’s an idiot for believing what he reads and is insulted by being questioned. 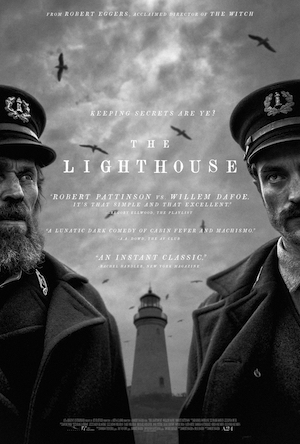 Over time and whisky they both loosen up around each other, sometimes getting along better, sometimes being more willing to tell each other off. In some sense the movie is about what happens when two as-far-as-we-know-straight dudes live in close quarters together. This is another one that could’ve been called MEN before MEN was called MEN. You can almost smell the b.o. in those living quarters, and most of the major bodily fluids are represented. There are two farts and a long piss before there’s any dialogue. In one scene Winslow has to dump his boss’s shit bucket and it blows in his face in what seems like an homage to THE BIG LEBOWSKI spreading-Donnie’s-ashes scene. There’s lots of drinking, toasting, pipe smoking. A little puking. Alot of jerking off. They drunkenly sing and dance and almost kiss and then catch themselves and immediately put up their dukes like old timey boxers. That was my favorite joke in the whole movie. Fragile masculinity becomes hilarious when you make it out of date enough.

My other favorite scene is when Winslow insults Tom’s cooking and he gets so upset he seems like he’s gonna cry, begs him to at least admit to liking his lobster, then delivers a passionate monologue.

Meanwhile, man if that score by Mark Korven (CUBE, THE WITCH, THE BLACK PHONE, RESIDENT EVIL: WELCOME TO RACCOON CITY) isn’t warning us that something bad is looming. I think A24 was wise not to market this as a horror movie, but I personally think it qualifies. On the podcast where Eggers confirmed that he intended THE WITCH to be horror he described this as “a strange tale,” which I took to mean a Strange Tale! – a creepy short story that would be in some old pulp magazine. I think that’s a good explanation. But it’s hard to explain in a trailer so they were just honest and treated it as a weird new thing the guy that did THE WITCH wanted to do.

It just so happens it’s a weird new thing involving seaman’s superstitions about curses and shit. Tom notices Winslow shooing away seagulls and warns him to be careful with them because it’s “bad luck to kill a sea bird.” He’s so serious about it that when Winslow scoffs at it he hits him. So it’s worrisome when Winslow finds an injured gull. It seems like he’s either contemplating if he can help the thing or worrying that Tom will see him with it and assume he’s responsible. But when another gull flies over and starts squawking at Winslow he grabs it and smashes it repeatedly against the rocks until it’s nothing but pulp. Jesus, this guy is tightly wound!

Uncalled for, Winslow. I’m against it, and so is the camera, which moves over to the freshly re-painted bricks of the lighthouse, then crawls all the way up the side until it reaches the weather vane at the very top just as the thing spins around to signal a change of wind that a non-skeptic might suppose was caused by Winslow’s fucked up actions. 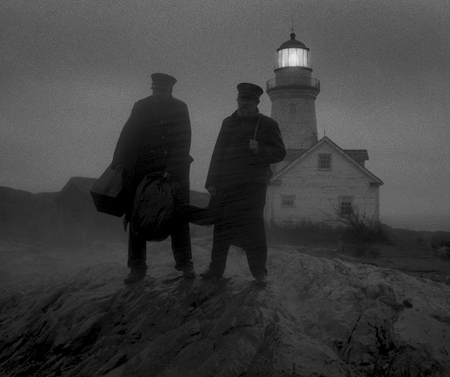 Right on cue, the storm hits. And the psychological states of these two worsen in conjunction with the weather conditions. Increasing rain, fog, howling winds, waves, mist, madness. Hallucinations, maybe. Or possibly unnatural phenomena. The type of shit that happens out there, one assumes. But that’s okay, they’re only out there for four weeks, and it’s almost over. On the last night they make up and seem convinced they’re gonna miss each other.

Except it’s not the last night. The boat doesn’t show up. The stability of a set end date no longer exists, and all bets are off. They run out of alcohol and start drinking turpentine and honey. Things get rough. Before you know it Winslow has his boss on a leash barking like a dog. (In THE NORTHMAN another character played by Dafoe will act like a dog as part of a rite of passage.)

This is an Eggers joint through and through, it doesn’t feel like a type of movie anybody else would make, but it did have little facets that reminded me of different things. Supposedly they took inspiration from Samuel Beckett, Harold Pinter, Sam Shepard, Herman Melville, the myth of Prometheus, and some paintings and shit. But those aren’t points of reference for me. At various times I thought of Shakespeare, Lovecraft, JAWS (specifically the bonding scenes on the Orca), the Coen Brothers, and Popeye. I also thought a little bit about ALIEN and THE THING, which is a weird comparison because it’s not any of the sci-fi stuff that’s similar, it’s just that feeling of doing a job, getting through a shift, and through the night. Out somewhere far from others, doing tedious work, looking forward to the paycheck. Spending many hours with somebody you never would otherwise, having a certain camaraderie from that, and also having every single thing about that person really fuckin get on your nerves after a while. But I also think there’s something appealing about the idea of just staying out in a remote spot like that, drinking black coffee in the morning and straight whisky at night. For a while. Not for four weeks. And not indefinitely.

Eggers wrote the script with his brother Max, starting before he got THE WITCH off the ground. Maybe that accounts for the different tone. I didn’t feel like I understood what it was about as much as THE WITCH or THE NORTHMAN, but I had a great time watching it. Those two seem like companion films to me, and this is a nice little break in the middle.

P.S. I was wondering how the fuck Chris Columbus ended up an executive producer on this thing, then I noticed that his daughter Eleanor Columbus is too, and that they both did the same for THE WITCH. I’m guessing she rebelled against her dad by having hipper taste in movies.

A24 Mark Korven Robert Eggers Robert Pattinson Willem Dafoe
This entry was posted on Thursday, November 17th, 2022 at 11:32 am and is filed under Horror, I don't know, Reviews. You can follow any responses to this entry through the RSS 2.0 feed. You can skip to the end and leave a response. Pinging is currently not allowed.

23 Responses to “The Lighthouse”