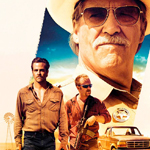 They did not cast against type. Tanner is the Mr. Blonde, yelling at and pistol whipping bank employees, causing scenes, screwing a hooker in the same hotel room while his poor brother lays wincing and facing the wall. I think this guy’s gonna be trouble. And Toby is the thief with a heart of gold, or at least the one who looks humanely through his ski mask with big blue sympathetic eyes and isn’t a jerk when a waitress (Katy Mixon from East Bound and Down) has a nice talk with him.

Tanner, we learn, is an ex-con, but Toby has a clean record, and we piece together that this is all part of a master plan to (spoiler?) keep his parents’ farm from being foreclosed so he can give it to his sons, even though he’s kind of estranged from them.

Jeff Bridges plays Marcus Hamilton, a Texas Ranger who takes the case rather than just dick around on his last days before retirement (uh oh!). He brings along Alberto Parker (Gil Birmingham, THE LONE RANGER, both 2003 and 2013 versions), who spends the entire movie fuming about Marcus’s constant jabs at his Comanche and Mexican heritage. Maybe they have some kind of friendship deep down, but on the surface it could not be more clear that he cannot wait for this unfunny racist shit bag to get the fuck out of the office so he never has to spend a day in a car or a night in a hotel room or an afternoon on the porch of a restaurant staring at a bank across the street with him ever again. 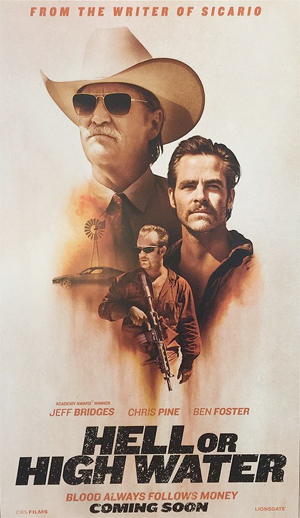 Bridges is, of course, great, playing kind of a slow guy closer to Rooster Cogburn than most of his other characters. (No biodigital jazz in this one.) There is some serious mumbling in this movie, both by him and marble-mouthed Foster. It’s a mumblecore movie, which is a name for a type of movie where there is a lack of volume or enunciation as an intentional artistic choice and sometimes there are sideburns or mustaches as well.

In many ways it feels like a real western, with its sunny, dusty, wide open plains, its slow travel, its banks that not many people use, it even has a few shootouts. But also there are cars and strip malls and country western music.

I think there’s a little bit of a satire of gun culture here. I believe there are three different scenes where the mythical “good guy with a gun” tries to stop a bank robbery, never with very positive results. First it’s the old man who they know has a gun, but they don’t take it from him, and he chases after them and busts off some shots. Then it’s a customer who has a concealed gun and tries to shoot them in a bank full of innocent bystanders. Then it’s the five pickup trucks full of vigilantes. That was where I wasn’t sure it was credible. This bank hostage has a phone but instead of calling police texts her dad, who shows up in like 30 seconds with a fuckin militia. What, did they happen to be polishing their weapons across the street?

And I would like to think that once these dudes – who by the way are so rural that one of them knows a random, useless rocky hill next to a road out in the middle of nowhere “like the back of my hand” – showed up trying to save the daughter, they would still have the common sense not to follow the armed robbers. But maybe I’m wrong, maybe these people really do want to shoot people so bad they will go far beyond the line of reason for a chance to do it. Like how guys will turn real, real stupid chasing an opportunity to get laid. These guys have gun boners.

Is that a real thing? If not maybe it’s worth stretching the truth for the visual punchline it builds up to.

These are all good performances and interesting characters. Alberto is probly the one I relate to most. His patient but exasperated way of dealing with Marcus’s foolishness is very funny. Marcus should listen to him more and should learn to not annoy the shit out of his co-worker. It’s common courtesy. But since he’s the boss he’s the most active one and sort of the main protagonist. And it is a joy just to watch the laid back way he does his job and the things he says to amuse himself, not really others.

And what’s really interesting is when he finally (spoiler?) catches up to the brothers. You sympathize with them too, because of their motives, but once there are guns pointed both ways you become a Texas Ranger. Because fuck these guys. Tanner seems like maybe he’s supposed to be a little more of a noble outlaw than I take him for, or maybe that’s only in his own mind. But his crazy last act choice makes for some good, tense drama. I was caught between enjoying seeing all hell breaking loose and thinking, “oh, come on Marcus, get this guy.”

But when Marcus (okay this is definitely a spoiler, you can skip this paragraph if you haven’t seen it) separately comes face to face with Toby that’s a real shift in perspective because throughout this thing Toby has gotten away with being portrayed as the nice boy. Now all the sudden he’s pointing a gun at an old retiree and making insinuations. And at this point he’s gotten away with it, he doesn’t have his farm and his boys to protect, just himself. Most importantly, Marcus is correct that his friend was killed for the plan Toby put into motion. He can’t stay morally distanced from it just because his crazy brother pulled the trigger. He was the one that unleashed him and pointed him in that direction.

The director is David Mackenzie, known for YOUNG ADAM, HALLAM FOE and STARRED UP, among many others. I’m not familiar with his other work, but it makes sense to learn this is from a Scottish director. I think it’s meant to be a pretty naturalistic look at the south, but it feels a tiny bit exoticized to me, a cast of guys from the coasts getting excited about wearing western shirts and getting sweaty. I’ve long been a fan of Ben Foster and his… effortful acting, let’s call it. He was a young actor who really got into his roles and tried to transform himself, even chewing up a role like the Jan Michael Vincent character in the remake of THE MECHANIC. But then god damn Ryan Gosling came along, did the same type of shit, but while being more handsome, seems like he took the other kid’s career. So I’m glad to see Ben Foster back playing a weirdo wizard in WARCRAFT and now in this acclaimed movie where he might even get awards consideration and what not. Good to have a new generation of great character actors.

But, uh, I have to admit that the seams show a little bit on this one. It’s really fun to see him puff his chest out and hear him spit redneck patter R. Lee Ermey style, but… I also can’t help but picture these two talking to a West Texas consultant who teaches them how to squint and comb their mustaches. If I’m being honest there’s something overly self conscious about Foster’s portrayal of southern machismo that feels a little too big for this movie.

And I feel like there are other aspects of the movie that are just as posturing. I don’t think they need to be so on the nose with their themes of rural economic blight. They’re killing them pretty softly here, if you get my drift.

Okay, that’s not fair, it’s subtle and unobtrusive compared to that movie, but I still think it’s too much. In the opening shot the camera floats past graffiti that says “3 tours in Iraq but no bailout for people like us,” which could not help but set off my “oh jesus here we go” alarms and interfere with the subsequent montage of driving past “going out of business” signs. The robbers, the cops, and an actual guy who works at a bank all make speeches about how the banks are the real bad guys. Most of the rest of the people in the movie who are not anti-bank-robber gun vigilantes practice a stop-snitching policy and mention reasons why they hate the bank. Laying it on thick.

I mean, this is a movie where the introductory shot of the about-to-retire cop is of him holding a paper that says “Mandatory Retirement Notice” in big bold letters at the top. In a certain way this is misdirection, and I know you have to take short cuts in storytelling, not everything has to be documentary realism. But to me this kind of laughably phony short-hand clashes a little with the overall quiet, unsensationalized style of the movie, the thing that makes it appealing.

The motif of relations between white people and Native Americans (displayed in conversations with Alberto, in in Indian casino where Tanner gets into a heated discussion with a guy who says he’s a Comanche, and later when he refers back to that conversation) is no less subtle than the economic recovery stuff, but at least it’s a little cryptic, so you gotta think about it. The script by Taylor Sheridan (SICARIO) was originally called COMANCHERIA, which is kinda good and would’ve tipped off the pretentious side of the movie. But HELL OR HIGH WATER sounds much cooler. They made the right decision there.

Another movie this reminded me of was OUT OF THE FURNACE with Christian Bale. That was another one that was all about a great cast, a crime story set in a particular region, with ex-cons and war veterans and no good jobs and generations of poverty and desperation. I think OUT OF THE FURNACE did a much better job of making it feel like this is the world this takes place in instead of DON’T YOU SEE, I HAVE AN IMPORTANT MESSAGE TO GET ACROSS TO YOU PEOPLE.

On the other hand, HELL OR HIGH WATER feels like a more complete, satisfying story. Which is important. And Bridges cuts through it all. Bridges builds bridges across the labored messages and into your heart. Despite my quibbles, this is a pretty good one.

Ben Foster Chris Pine contemporary western David Mackenzie Gil Birmingham Jeff Bridges Katy Mixon Taylor Sheridan
This entry was posted on Thursday, September 8th, 2016 at 11:47 am and is filed under Crime, Drama, Reviews. You can follow any responses to this entry through the RSS 2.0 feed. You can skip to the end and leave a response. Pinging is currently not allowed.

39 Responses to “Hell or High Water”