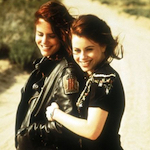 GAS FOOD LODGING* is another one from IRS Releasing (RUBIN & ED, ONE FALSE MOVE), and it’s the sophomore film from writer/director Alison Anders, whose debut BORDER RADIO (1987) (co-directed with Dean Lent and Kurt Voss) had been nominated for Best First Feature at the Independent Spirit Awards. This one’s loosely based on a 1971 young adult novel called Don’t Look and It Won’t Hurt by Richard Peck, but it fits pretty well into this period of American indie cinema when Anders’ future FOUR ROOMS neighbor Quentin Tarantino hadn’t arrive yet and directors were more influenced by her former boss Wim Wenders (she was a production assistant on PARIS, TEXAS). It’s about two sisters growing up with their single mother in a mobile home in dusty (fictional) Laramie, New Mexico, and doesn’t try to bullshit you with much more of a hook than that. That’s what Anders is interested in. END_OF_DOCUMENT_TOKEN_TO_BE_REPLACED

Sutherland (STAND BY ME) plays Buster McHenry, who is one of those guys who goes into a little diner and is on a first name basis with the old man behind the counter. You know the type. Like Dirty Harry, he happens to see a traffic stop turn into a hostage situation from the window while having some night time coffee. Like Riggs, he goes out and performs a crazy stunt, pretending to be a drunk guy wandering in the situation so he can take one guy’s gun, shoot two others, make one surrender. Then he slaps the commanding officer and spends a night in the drunk tank for it. He’s actually a cop but he’s on vacation, doing a private undercover case with the knowledge (but not official sanction) of his boss/mentor/dead dad’s friend Lieutenant Finch (Bill Smitrovich, BAND OF THE HAND). END_OF_DOCUMENT_TOKEN_TO_BE_REPLACED

The young guy is Nick Walker (Ryan Reynolds, BLADE TRINITY), in life a Boston PD detective betrayed by his partner Bobby Hayes (Kevin Bacon, ELEPHANT WHITE) over some kind of gold treasure they stole from a crime scene. Nick was having regrets and wanted out so Bobby shot him in the face during a raid. Instead of Heaven or Hell, Nick goes to RIPD to continue as a cop and help them round up “deados” who illegally stick around on Earth. Not really a noble calling, in my opinion. END_OF_DOCUMENT_TOKEN_TO_BE_REPLACED 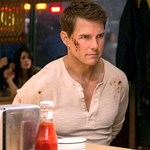 So congratulations to Jack Reacher for eking out just enough box office to justify a sequel. It feels so natural, but I honestly didn’t think it would happen. END_OF_DOCUMENT_TOKEN_TO_BE_REPLACED 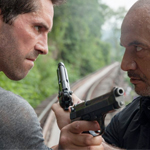 In the lead is our greatest modern action star, Scott Adkins. He does not sport a mullet or Cajun accent, and he’s not playing Chance “My Mama Took One” Boudreaux or his son Fingers Crossed Boudreaux or anything like that. He’s Wes “The Jailor” Baylor, rising MMA star exiled to an underground fighting circuit in Thailand after accidentally killing his best friend in the ring. END_OF_DOCUMENT_TOKEN_TO_BE_REPLACED