X-MEN FIRST CLASS is the new X-MEN prequel that I guess they made to save money on the cast and to appeal to today’s young audiences, who despise baldies and cripples. So Professor Xavier, Magneto, Mystique and Beast return played by younger, hair-sporting, wheelchair-free actors to tell the story of what went down with the mutants during the Cuban Missile Crisis and before the founding of Professor Xavier’s Fancy School For Tots Who Shoot Beams.

This time around it’s directed by friend of the internet Matthew Vaughn (KICK-ASS, LAYER CAKE, almost did X3 but quit at the last minute) with parts 1-2 director Bryan Singer as producer. It has a very similar tone and feel to the previous X-Pictures, but the early ’60s setting is a nice change. They use it as an excuse to use some of the silly outfits from the comics and to have alot of beautiful women walking around in skimpy clothes and handsome men in nice suits. Stylistically there are some mild retro touches – a little dash on the score (they shoulda done it up full-on James Bond, in my opinion), some lounge tunes here and there, some goofy split-screens and wipes, alot of really crappy looking effects. Actually that last one was probly not on purpose, a phony looking diamond-skin digital effect is not something you’d see in the old 007 pictures, but I thought it sort of fit in somehow. 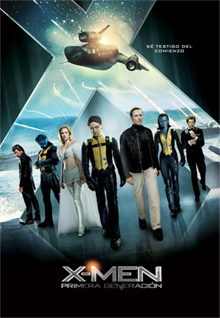 We see how Xavier met Magneto, who gave them their nicknames, how they tracked down other mutants and turned them into a team, and why they became enemies (spoiler: for the reasons already explained in the other movies).

They stay away from some of the mutants from the other movies (including ones that were already there at the start of part 1, like Storm, Dead Blind Guy and Xenia Onnatopp) but introduce a bunch of other ones: girl with bug wings, guy with powerful screams, etc. (I was trying to figure out why I recognized that kid, turned out he was the creepy brother who was the best part of THE LAST EXORCIST). There are some training sequences, some adventures and what not. Michael Ironside shows up as a general, no not much dialogue, and credited as “M. Ironside.”

One of the best scenes is the one where the young mutants all meet for the first time. They show each other their powers, make up super hero names and laugh. None of them have been able to show off their mutant abilities before, so it’s kind of sweet to watch them open up, and you can understand why they seem to get along pretty quick. It’s nice to see them having a good time, and when Mystique reminds everybody to refer to Alex as “Havok” it really does seem like a dumb thing some friends made up for fun.

Hank “The Beast” McCoy, not yet furry and blue but with useful thumbs on his feet, invents a serum that’s supposed to make mutants look “normal” but not affect their abilities. I’m not sure how he expects to use that since his ability is to jump upside down and grab onto things with his weird-looking feet. Not gonna do him much good with “normal” feet. But through this plotline we’re able to re-deal with some of the same moral issues as in part 3 but not as severe since it will only change your looks and is not used as a weapon.

Since it takes place in the ’60s they have a couple references to the sexism of the time and one unspoken acknowledgment of the history of slavery to address the racism. The one black guy dies right away (heroically though, don’t worry) and Lenny Kravitz’s daughter switches back to the Nazi’s team without needing much encouraging. So that was kind of a bummer. They’re all about racial equality as a metaphor but not as a reality. I don’t know if they know this movie only takes place in 1962, it wasn’t actually filmed in that era, so they’re allowed to have different races it. Oh well, you live and you learn.

There’s a commercial I kept seeing on tv with a quote from somebody saying “Matthew Vaughn does for X-Men what Christopher Nolan did for Batman.” That’s absolutely right in the sense that both of them did a movie about a comic book that took place in an earlier period than the previous movie somebody else made. But if they meant it in any sense that the commercial wants you to think then I gotta call bullshit on that. Nothing against First Class, and I’m sure some of you will like it better than Mr. Nolan’s Bat-pictures, especially if you’re against greatness. But I think First Class is a movie that does pretty well what a comic book movie is supposed to do, Dark Knight is one that transcends and goes beyond what a comic book movie is supposed to do.

This is not a complete re-invention of the X-Men series. It has what’s fun about the other ones: an ensemble of colorful characters using their different goofy powers against each other, a world where society has to deal with the existence of mutants, disagreements between the more compliant mutants and the more militant ones. That’s what’s good about it.

The one area I think it could’ve been way better is unfortunately an important one: I think it’s kind of hollow. It deals with relationships and conflicts that we’ve already seen in three other X-Men movies, and I don’t think it adds much, if any, depth to them. We’ve heard for three movies that Professor X and Magneto used to be friends, now they make a movie where they get to go back and show the time when they had fun together. In a montage. Mostly they’re kind of uncertain allies.

If you ever read my review of X-Men Part 2: X2 then you know that Mystique is my favorite X-Man. But you also have documentaiton there that everything about her attitude and motivations in this movie were already evident in the old ones when she was the bad guy’s henchwoman instead of one of the lead protagonists. They basically take what was there between the lines and then spell it out in shitty dialogue, like the awkwardly forced scene where she and Beast are having a conversation and accidentally say at the same time that they want to look “normal”. And then act like that’s some huge surprise.

I do still like Mystique alot in this incarnation (she’s played by Jennifer Lawrence from WINTER’S BONE), but it’s kind of lame that they made her characterization less subtle and no deeper. They switched from a swimsuit model to an Academy Award nominated actress and didn’t getting anything good out of it. Come on, fellas. Respect for the blue, scaled cleavage in the X-suit, though.

In fact (OUTRAGE ALERT) the universally hated BRETT RATNER’S X-MEN 3 was, for me, a more emotional movie, the way it dealt with the different characters’ feelings about being “cured,” the morality of using the cure as a weapon against mutants, the tragic betrayal of Magneto ditching Mystique as soon as she got forcibly un-mutated, and even the minimalistic development of the character I think was called Angel that was not the same character as in this one that was called Angel. Without as much screen time or dialogue they said more about that character’s struggles with being different than they did with Beast and Mystique’s conversations in this one.

The coolest character in this movie, and the one they do the most with, is definitely Magneto. Michael Fassbender (who’s also managed to work with Tarantino, Cronenberg, Soderbergh, Jarmusch and Ridley Scott in a period of three years) gives him the dignity and seriousness Ian Mackellen did, but while still young and badass. It was pointed out to me that he’s an exception to my previously stated rule that Steve McQueen was the only white man that looked good in a turtleneck.

The emotional underpinnings again are the same as in the previous movies – in fact, they straight up just reshot the first scene of the first movie where he uses his powers to tear open the gate at the concentration camp – but we get to see some scenes where he’s grown up and tracking escaped Nazis in South America to get revenge for what happened to his family. I wonder if that’s what David S. Goyer’s Magneto movie would’ve been about? It seems worthy of its own movie.

While Magneto’s travelling the world hunting war criminals, that douche Xavier’s going to Oxford and using his knowledge of mutants to hit on girls. The fuckin X-Mansion is his! That’s where he grew up, and when the CIA won’t play with him anymore he just starts his own gig there, apparently with his own money. The guy was born telepathic and smart, he became a professor when he was still in his twenties it looks like, never seemed to have to work for a living. To be fair though we learn that his mom never made him cocoa, so that’s pretty harsh.

Even more than in the previous movies it’s easier to root for Magneto than for the X-Men. The movie makes you relate to him and his mission of revenge, and then assumes you’ll understand silver spoon Xavier when he says “No, don’t kill the Nazi-collaborator who executed your mother in front of you as part of a long series of torturous experiments he did on you to gain powers he is now using to start a nuclear holocaust – you’d only be stooping to his level!” I mean, I agree with non-violence and pacifism (more than Xavier does; I’m not the one with the heavily armed private militia) but I don’t think any of us blame Magneto or even have any regrets about him killing the guy. It almost seems like Xavier is being a dick by spoiling the moment with his platitudes.

Magneto is also the clear winner in the more superficial departments of coolness and charisma. Wise veteran Patrick Stewart can get away with preachiness and corny inspirational talk to his students, but when it’s a young guy he just seems like a nerd. And it would be fine if he was a nerd who was great at inspiring other mutants and making them feel good about themselves, but he completely blows it with his own best friend since childhood, who he considers a sister. He promises Mystique that he won’t read her mind, but then without it he’s completely insensitive to her feelings. This is intentional on the part of the filmatists, to show Xavier’s flaws, but I just don’t see as much of his strengths as I’m sure I’m supposed to.

Unfortunately at the end Magneto just starts acting like he’s the bad guy, since he’s supposed to be the bad guy. The switch from hero-of-the-movie to man-who-has-gone-too-far-and-now-wants-to-wear-a-purple-helmet-with-horns just seems to happen because it’s time. In the end we know that Mystique used to be friends with Xavier, we know more specifics about the torment Magneto went through during the Holocaust, and we know what they looked like in yellow suits. But do we know anything important? I don’t think so. I guess alot of classes are like that.

Fun movie though. I liked it about as much as the other ones. I’m just saying let’s not get carried away.

Bryan Singer James McAvoy Jennifer Lawrence Kevin Bacon Matthew Vaughn Michael Fassbender prebootquels
This entry was posted on Sunday, June 5th, 2011 at 5:23 pm and is filed under Comic strips/Super heroes, Reviews. You can follow any responses to this entry through the RSS 2.0 feed. You can skip to the end and leave a response. Pinging is currently not allowed.