UNIVERSAL SOLDIER III: UNFINISHED BUSINESS continues from part 2, clearly shot back-to-back and even including a “previously on Universal Soldier” type montage. Burt Reynolds is the sleazy CIA director trying to stop Luc Deveraux (Matt Battaglia, not Van Damme) and the reporter from revealing the UniSol program. I’m sure he wouldn’t get in trouble, but Congressional hearings are probly a pain the ass, you gotta go to bed early the night before, get your suit cleaned, send your lawyer a thank you note, all that shit. Easier to just stay out of the headlines. 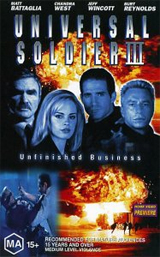 Reporter Lady is still a fugitive, blamed for crimes she didn’t commit. They go to Canada to find her ex-boyfriend, a reporter on the financial beat she thinks could help. He’s covering “The Cyber Wealth Summit” where “the Cyber Community” of millionaires are all congregated, so she sneaks in disguised as a waiter while Luc waits outside. But some terrorists take everybody hostage – holy shit, it’s a DIE HARD ripoff within a UNIVERSAL SOLDIER sequel! You don’t see that every day. Luc saves the day and kills the bad guys, then it’s back to regular UNIVERSAL SOLDIER except the scientists turn the dead hostage takers into their next batch of UniSols.

More interestingly, the evil scientist is working on a new super soldier clone that starts out as a fetus and rapidly grows into a kid. He teaches the clone to call him father. I was hoping Luc would get to fight a little kid UniSol, but unfortunately it grows into his brother (still Jeff Wincott). The clone is brainwashed to not remember him, and to really fuck with his mind it has a bomb in its chest. Surprisingly, when the bomb goes off it seems to be an M-80. Interesting choice.

The ex-boyfriend’s in-movie lifespan is reminiscent of the car-bombed love interest in DEATH WISH III, and Reynolds’s so-bad-at-first-you-don’t-realize-it’s-supposed-to-be-an-accent accent is the weirdest since Dennis Hopper’s in TICKER.

deals, they had no idea this was right under their noses the whole time.

Director Jeff Woolnough went on to direct a whole bunch of TV episodes and a TV movie about Celine Dion. Writer Peter Lenkov got a story credit on DEMOLITION MAN and co-producer on BALLISTIC: ECKS VS. SEVER.

UNIVERSAL SOLDIER: THE RETURN, which returned Emmerich and Devlin’s thrilling saga to the big screen, is about the time that the Universal Soldier returned, I guess. Jean-Claude Van Damme returns to the role of Luc Deveraux, the Vietnam K.I.A. who was revived into a zombie super soldier and then went rogue and learned a few human emotions (a story that started in part 1 and continued with Matt Battaglia as Deveraux in parts 2 and 3). But this time he’s not a terminator, he’s an ordinary single father like any other Van Damme character. He’s in charge of training the UniSols for non-sinister computer genius Xander Berkeley (seriously, he’s a good guy in this, I’m not lying) while a super computer called SETH (voice of Michael Jai White!) tutors his daughter. But when government cutbacks force the cancellation of the UniSol program, SETH protects his interests by doing brain surgery on the soldiers and controlling them to do his bidding. And only Deveraux can stop them, because… because he’s the main character. And for some reason there’s a new pretty lady reporter there when the shit hits, so she becomes the female lead instead of Van Damme’s asskicking colleague, who has to go take car of his daughter. 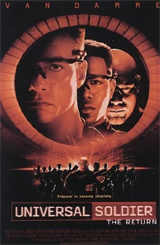 I don’t really understand why they brought back Van Damme only to be unrecognizable as the same character. It seems like somebody told them it was the reporter lady that people liked about the first one, not the undead super soldier hero. So they team him up with a reporter again, but make him not an undead super soldier. Just an ordinary revived dead guy good at kickboxing (he just explains that they “reversed the process” so he’s alive and regular now).

The character SETH is pretty funny. I got a kick out of a super computer talking in a gruff Michael Jai White voice instead of the usual eerily calm HAL 9000 types. I bet if you wanted to you could go into the preferences and switch it to a Kris Kristofferson voice too. Later SETH puts himself into a bionic MJW body so he can fight Van Damme. In case you haven’t figured it out yet I really like MJW’s screen fighting style. Impressive kicks, heavy on poses, and he even does that move I’m a sucker for where you kick a chair so it slides across the floor. And he does it more than once. So obviously this isn’t a worthless movie.

SETH is supposed to be more enhanced than the other UniSol’s, so if Deveraux was dead it would still be an underdog story. But since he has no super powers it’s really unclear why he’s so evenly matched with SETH’s super strength. I guess just because he loves his daughter so much. My favorite part is a completely nonsensical move where he runs across the type of a bunch of lawn chairs and then up a wall. As far as I can tell it accomplishes nothing at all in the fight other than to look cool. I love it.

The producers I guess didn’t think Van Damme and White were big enough names, so they threw in WWE wrestler Goldberg as the lead henchman UniSol named Romeo. Not Whoopi Goldberg, I’m talking about the big bald meathead who starred in HALF PAST DEAD 2. He growls alot and gets alot of the funniest stupid lines, like when he’s on fire and says “I’m just getting warmed up!” You get it, because of he’s on fire, that’s why he says that. Warmed up, see.

The opening action scene (water ski chase through swamp) is pretty cool, but like many of the other action scenes it hobbles itself by using rock songs with crunchy guitars and troll voices. They keep using that as shorthand for “this part is awesome,” but I never buy it. I don’t know if maybe young headbanger kids who like that kind of music get pumped up for an action scene when they hear that, but to me it completely deflates it and seems desperate. “Hey kids, I know you are confused by this old Belgian man, but what about the rocknrollers? You like this stuff? They wear scary masks I bet! Let’s go download some MP3s together!”

There are a couple of clever action moments: whatsername riding Goldberg down a stairway like a sled, Van Damme watching the x-ray of his UniSol opponent so he can punch the face at the right angle to dislodge a faulty chip. But after that most of the fights are guys at some generic warehouse firing machine guns and huge explosions going off. Not much to it. It does have a few funny lines though, like when a strip club bouncer that Van Damme headbutted earlier comes after him with a bunch of friends and Van Damme pleads, “Please, no violence.”

This is a dumb movie, but adequate enough to hold your attention, and it has a few bright spots, like having JCVD fight MJW (but why does that come before fighting Goldberg?) Still, you only got so many days to live on this earth, and there are alot of other Van Damme movies.

Bill Goldberg Burt Reynolds JCVD Jeff Wincott Michael Jai White
This entry was posted on Monday, January 25th, 2010 at 1:54 am and is filed under Action, Reviews, Science Fiction and Space Shit. You can follow any responses to this entry through the RSS 2.0 feed. You can skip to the end and leave a response. Pinging is currently not allowed.