Some movies you hear about for so long that you almost don’t really believe you’ll ever see it. You always think of it as being something far off in the distance somewhere, then next thing you know it’s there and you weren’t even ready. Everybody’s rushing to get their thoughts online, but I’m a little slower than some people because I want time to process it. I know alot of people are curious what I think about this highly anticipated sci-fi release. I’m sure opinions will be all over the place, but I gotta say that no matter whether you are disappointed or blown away it’s really exciting to see an old favorite coming back, trying to give the fans something new. It’s quite a time to be a fan of these types of movies. 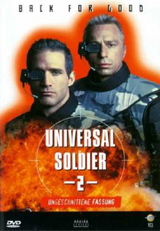 I’m talking of course about UNIVERSAL SOLDIER 3, the new one which is gonna reunite Dolph Lundgren with Jean-Claude Van Damme. I will be seeing it shortly and let you know what I think, but first I had to straighten out a few things about this series. You see, there are four UNIVERSAL SOLDIER movies that have come out previously to part 3. Do you see where I’m going with this? I’m not a mathematical genius – or a mathematical average, for that matter – but by my calculations part 5 cannot be part 3. Or at least the odds are against it.

So I decided to investigate, renting the sequels to the 1992 original that still to this day remains Roland Emmerich’s, uh, best movie. Hahem. Not to get too hyperbolic on you, I don’t want to raise your expecations too high.

Parts 2 and 3 are on VHS only, and don’t have Van Damme in them. And the very first credit answers the numbering conundrum: “The Movie Channel Presents…” See, these were made for cable, and in the grand scheme of things “made for cable” ranks lower than “made for video,” therefore these sequels can be disregarded and erased in the event that the original star returns. Which makes me see THE SUBSTITUTE series in a different light, come to think of it. I’m not sure what this means for SNIPER 3 though since it was made for cable but still starred Tom Berenger.

UNIVERSAL SOLDIER II almost seems like a TV series – it even has the subtitle, “Brothers In Arms,” written in quotes at the beginning like an episode title. Gary Busey and Jeff Wincott are listed as guest stars or special appearances or something.

It starts with a fight between two similar looking musclemen which ends with one muscleman having his hand impaled and being crunched up in a threshing machine, and that’s when you realize Van Damme and Lundgren’s characters have been recast. Matt Battaglia plays Van Damme’s character Luc Devreaux, still with the fugitive TV reporter Veronica Roberts (now played by Chandra West [PUPPET MASTER 4-5]), hiding out as his parents’ house, learning things that robotic zombie soldiers don’t know about, like kissing and knock knock jokes.

But a corrupt mercenary (Gary Busey) is taking over the Unisol program, and they come after Luc and take him back. There’s a boring section of the movie where Veronica is driving around looking for him, but it pickes up once she sneaks into a military compound and unfreezes Luc’s older brother Eric, who was blown up in Vietnam. He’s played by Jeff Wincott (MISSION OF JUSTICE‚ and he’s just resurrected, not super soldiered, so he acts like regular Jeff Wincott, except a little confused because he’s from the ’60s and doesn’t know about twist off caps.

I can’t really recommend this exactly, but it winds up being more watchable than most DTV. It seems like they’re actually trying, putting in some energetic cuts and camera moves and using alot of different typs of music, from pop to classical. There’s one great moment of crazy and it’s set to the overused but never gets old “Spirit In the Sky.” Busey arrives to meet with a group of soldiers, who are surprised to see him alive. He tells them they’ve been chosen because they’re the best , and they should be very proud. Then he pulls out a machine gun and mows them all down. Then it shows a tear coming out of his eye. Beautiful.

Despite his guest star credit, Busey gets plenty of screen time and he’s in the much preferred post-accident Crazy Busey mode. He has some funny tought guy lingo and metaphors, like when he’s demonstrating the Unisols to a terrorist, the guy pulls out an empty briefcase and pours a pouch of diamonds into it, and BUsey says, I take it we’re engaged.”

The guest star billing should actually go to Burt Reynolds as the shadowy puppetmaster seen mostly just at the end, like David Carradine at the end of KILL BILL VOLUME 1.

The action isn’t anything memorable, and there’s not any significant gore or anything. There’s a funny part where she finds a drawer full of eyeballs. Also it shows the dude’s ass at the beginning, maybe as a tribute to Van Damme. That’s the different between network TV and The Movie Channel: ass. Well, unless you count NYPD BLUE, that’s network TV that shows ass. But most shows don’t.

Battaglia I guess was a football player, and he makes Howie Long look like Jeremy Irons. I really can’t tell how much of his monotonous performance is playing a zombie soldier and how much is limited range. Either way it works – uncharismatic, but funny. And having Jeff Wincott to bounce off of makes it more bearable.

Burt Reynolds Gary Busey Jeff Wincott
This entry was posted on Sunday, December 20th, 2009 at 4:19 am and is filed under Action, Reviews, Science Fiction and Space Shit. You can follow any responses to this entry through the RSS 2.0 feed. You can skip to the end and leave a response. Pinging is currently not allowed.