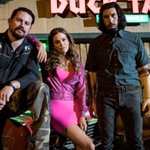 If it was anybody besides Soderbergh it would seem weird that it was this one that pulled him back in – arguably as close to hack-work as he’s ever done. It’s sort of a redo of his three OCEAN’S movies but with hick characters and locations. But even a weak Soderbergh movie has always been worth seeing, and one of his talents is finding the compelling in the routine. It’s a bouncy, far-fetched caper story, but he seems completely invested in the lead character and the time he spends with his precocious little daughter (Farrah Mackenzie, DOLLY PARTON’S COAT OF MANY COLORS), and gives those scenes weight that really anchors the movie.

Channing Tatum, who has formed a productive partnership with Soderbergh since playing the first guy Gina Carano beats the shit out of in HAYWIRE, stars as Jimmy Logan, a construction worker laid off due to a bum leg (see also RED ROCK WEST) who convinces his bartender amputee Iraq vet brother Clyde (Adam Driver, J. EDGAR) and hairdresser sister Mellie (Riley “Capable” Keough from FURY ROAD) to help him rob a NASCAR event.

Because his job involved tunneling under the Charlotte Motorway to fix sinkholes, he knows about a pneumatic tube system for transferring concessions money, and they know a weirdo explosives expert named Joe Bang (Daniel Craig, LARA CROFT: TOMB RAIDER) who can help him tap into it. Joe is currently in prison, so all they have to do is break him out, successfully pull the job and then return him to prison without anyone noticing he was ever gone since he’s getting out in a couple months anyway. No problem! 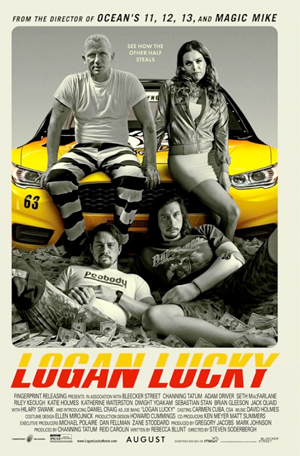 Please note that part of their plan involves incapacitating the credit card terminals so that customers will pay in cash. I did that for a much less ambitious heist in my book Niketown. Do you guys think I’m cool now? I think that might mean I’m pretty cool.

Taken as a companion piece to OCEAN’S, LOGAN is a nice class-equalizer. Jimmy is a guy who can fix an engine, wears camo and dirty overalls and baseball hats with the rims bent, drives a pickup truck, and has a tiny daughter who wears makeup and enters beauty pageants. But also he demonstrates every bit as much heisting creativity, impossible planning and outsmarting powers as the handsome, expensive-suit-wearing Danny Ocean. With only neighborhood and family connections and ordinary not-high-tech tools, Jimmy pulls off a job as complex and outlandish the Ocean’s teams. And when everything turns out exactly right against all odds it feels more like Jimmy deserves it than slick-ass Ocean does.

Jimmy’s larger-than-life smarts do neutralize the sting of some ha-ha-look-at-these-funny-rednecks jokes – a thankfully small part of the movie, but one that tempers my enjoyment of the movie. I’m not saying Soderbergh is classist – this is the same guy who built a movie around a non-actor manager of a KFC – but I just think some of these jokes are corny. I wince at the “hicks don’t understand computers” jokes like Jimmy saying “I looked it up on the Google” or Fish (Jack Quaid, THE HUNGER GAMES) boasting “all the Twitters. I know ’em.” And though Clyde is in some ways the most interesting character, I couldn’t help but be distracted that Driver seemed to be imitating Tim Blake Nelson to get his accent. Sometimes he’s doing the simple-sounding-guy-with-large-vocabulary joke, but this dialogue (credited to the mysterious Rebecca Blunt, believed by some to be a pseudonym) isn’t up to Coen Brothers specs.

Just like the OCEANSes it has a funky, upbeat score by David Holmes, and a big ensemble cast. It’s so big I’m gonna use bullet points to discuss them.

* Katie Holmes (DON’T BE AFRAID OF THE DARK) does well in a small role as Jimmy’s ex Bobbi Jo. I’ve always thought she was good and deserved better roles – that hasn’t changed.

* David Denman (The Office, 13 HOURS) plays Bobbi Jo’s current husband, and he’s perfect because he’s a macho dork who you immediately resent but ultimately realize is harmless and kinda likable.

* Dwight Yoakam (THE THREE BURIALS OF MELQUIADES ESTRADA) is the prison warden. Always good to see him too, even playing a foil that could be in a POLICE ACADEMY.

* Katherine Waterston (ALIEN: COVENANT) manages to play a sweet love interest in only about two or three scenes. This is her second 2017 movie where the characters sing a John Denver song.

* Sebastian Stan (RICKI AND THE FLASH) plays a NASCAR driver who’s more of a plot point than a character, which I guess is kind of his thing.

* Family Guy creator Seth McFarlane shows up for a few important scenes, and I have a bias against him, but he works here because you’re supposed to immediately hate him and never change your mind. It also helps that he’s not doing his normal cartoon voice, but a British accent while wearing a fake mustache, so I just thought of him as some kind of off-brand Mike Meyers.

* And Hilary Swank (THE NEXT KARATE KID) and Macon Blair (BLUE RUIN, GREEN ROOM) eventually show up as FBI agents. It’s cool just to see Blair pop up in a big movie, and Swank is having a good time blatantly mimicking her MILLION DOLLAR BABY co-star/director’s voice the whole time. How can I sound tough? Oh, I’ll just imitate Clint. It’s kind of laughable, but I love it.

I guess there are also cameos by NASCAR drivers and Jesco White.

You know what, this is almost like a Burt Reynolds movie. Tatum’s persona is very different than Burt’s, inward instead of arrogant, but this has some of the middlebrow humor and underdogs vs. overdogs themes of THE LONGEST YARD or something like that as it celebrates cars and bars and working class people. But it’s a little more serious than advertised, and that’s a good thing because I enjoyed the story and characters even though I didn’t find most of the jokes very funny.

So welcome back Soderbergh and welcome back Burt Reynolds type movies. Now please make a Charles Bronson type movie if you’re not retired. It could be called HAYWIRE 2: THE CRACKDOWN.